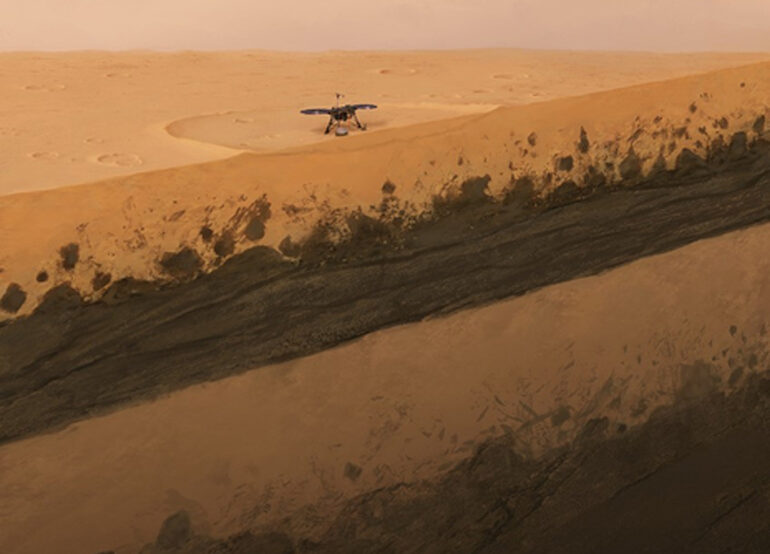 Seismic data collected in Elysium Planitia, the second largest volcanic region on Mars, suggest the presence of a shallow sedimentary layer sandwiched between lava flows beneath the planet’s surface. These findings were gained in the framework of NASA’s InSight mission (Interior Exploration using Seismic Investigations, Geodesy and Heat Transport), in which several international research partners, including the University of Cologne, collaborate. The paper ‘The shallow structure of Mars at the InSight landing site from inversion of ambient vibrations’ will appeared in Nature Communications on 23 November.

Geophysicist Dr. Cédric Schmelzbach from ETH Zurich and colleagues, including the earthquake specialists Dr. Brigitte Knapmeyer-Endrun and doctoral researcher Sebastian Carrasco (MSc) from the University of Cologne’s Seismic Observatory in Bensberg, used seismic data to analyze the composition of the Elysium Planitia region. The authors examined the shallow subsurface to around 200 meters in depth. Right beneath the surface, they discovered a regolith layer of dominantly sandy material approximately three meters thick above a 15 meter
layer of coarse blocky ejecta—rocky blocks that were ejected after a meteorite impact and fell back to the surface.

Below these top layers, they identified around 150 meters of basaltic rocks, i.e., cooled and solidified lava flows, which was largely consistent with the expected subsurface structure. However, between these lava flows, starting at a depth of about 30 meters, the authors identified an additional layer 30 to 40 meters thick with low seismic velocity, suggesting it contains weak sedimentary materials relative to the stronger basalt layers.

To date the shallower lava flows, the authors used crater counts from existing literature. Established knowledge about the impact rate of meteorites allows geologists to date rocks: surfaces with many impact craters from meteorites are older than ones with fewer craters. Also, craters with larger diameters extend into the lower layer, allowing the scientists to date the deep rock, while smaller ones allow them to date the shallower rock layers.

The authors propose that the intermediate layer with low volcanic velocities could be composed of sedimentary deposits sandwiched between the Hesperian and Amazonian basalts, or within the Amazonian basalts themselves. These results provide the first opportunity to compare seismic ground-truth measurements of the shallow subsurface to prior predictions based on orbital geological mapping. Prior to the landing, Dr. Knapmeyer-Endrun had already developed models of the velocity structure of the shallow subsurface at the InSight landing site based on terrestrial analogs. The actual measurements now indicate additional layering as well as more porous rocks in general.

‘While the results help to better understand the geological processes in Elysium Planitia, comparison with pre-landing models is also valuable for future landed missions, since it can help to refine predictions,’ Knapmeyer-Endrun remarked. Knowledge of the properties of the shallow subsurface is required to assess, for example, its load-bearing capacity and trafficability for rovers. Besides, details on the layering in the shallow subsurface help to understand where it might still contain ground water or ice. Within the framework of his doctoral research at the University of Cologne, Sebastian Carrasco will continue to analyze the effect of the shallow structure of Elysium Planitia on marsquake recordings.

The InSight lander arrived on Mars on 26 November 2018, touching down in the Elysium Planitia region. Mars has been the target of numerous planetary science missions, but the InSight mission is the first to specifically measure the subsurface using seismic methods.