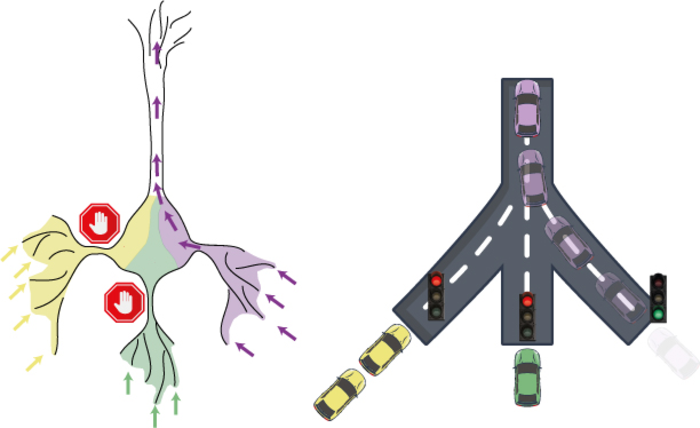 According to the neuronal computational scheme, each neuron functions as an excitable element. The incoming electrical signals from connecting neurons are accumulated, and the neuron generates a short electrical pulse, a spike, when its threshold is crossed.

For more than a hundred years it was surmised that each neuron is characterized by a unique short resting time of approximately two to three milliseconds after the spike occurred, in which the neuron cannot re-generate a consecutive spike. This resting period is followed by a longer period of stutter neuronal responses until full responsiveness is achieved.

First, the duration of the resting time can exceed 20 milliseconds, almost 10 times longer than previously assumed. These long refractory periods are even further increased depending on preceding neuronal activity.

Third, the neuron is a very precise element with a sharp transition from the refractory period to full responsiveness, without an intermediate stutter phase where the same stimulation of the neuron results in an evoked spike only with some probability.

“We reached this conclusion using a new experimental setup, but in principle these results, as well as other anisotropic properties of neurons, could have been discovered using technology that has existed since the 1980s,” said Prof. Ido Kanter, of Bar-Ilan University’s Department of Physics and Gonda (Goldschmied) Multidisciplinary Brain Research Center, who led the research. “The century-old belief that has been rooted in the scientific world resulted in this delay of several decades.”

These new findings call for a re-examination of neuronal functionalities beyond the traditional framework and, in particular, for an examination into the origin of degenerative diseases. Neurons which are incapable of differentiating between “left” and “right,” similar to distortions in the entire human body, are characterized by faulse activities. “Our findings might be a starting point for discovering the origin of these diseases. This work also opens new horizons for advanced deep learning algorithms and artificial intelligence-based applications imitating neuronal anisotropic properties, instead of isotropic nodes used in current machine learning applications,” concluded Kanter.