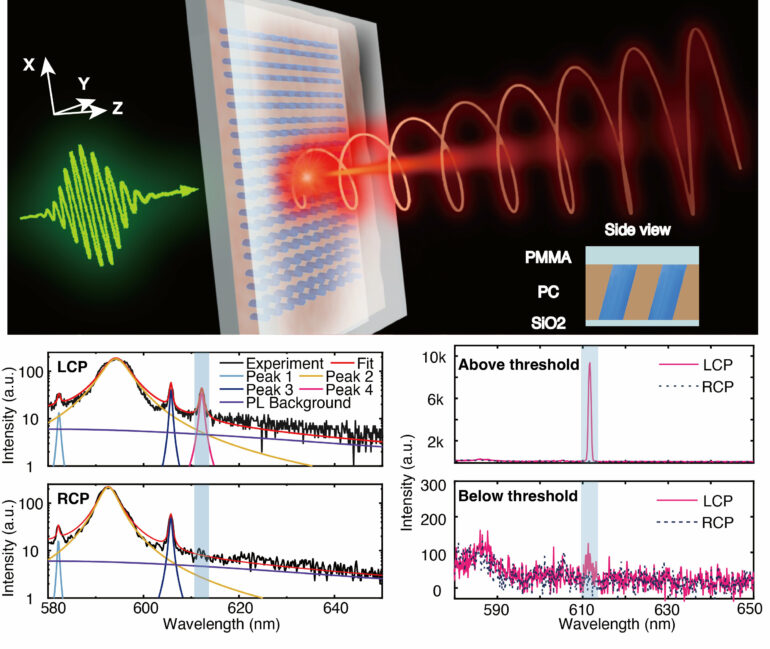 An ultracompact circularly polarized light source is a crucial component for the applications of classical and quantum optics information processing. The development of this field relies on the advances of two fields: quantum materials and chiral optical cavities. Conventional approaches for circularly polarized photoluminescence suffer from incoherent broadband emission, limited DOP, and large radiating angles. Their practical applications are constrained by low efficiency and energy waste to undesired handedness and emission directions. The chiral microlasers can have large DOPs and directional output, but only in specific power ranges. Most importantly, their subthreshold performances plummet significantly. Up to now, the strategy for simultaneous control of chiral spontaneous emission and chiral lasing is still absent.

In a new paper published in Science, researchers from Harbin Institute of Technology and Australian National University employ the physics of chiral quasi bound states in the continuum (BICs) and demonstrate the efficient and controllable emission of circularly polarized light from resonant metasurfaces.

BICs with integer topological charge in momentum space and a theoretically infinite Q factor have been explored for many applications including nonlinear optics and lasing. By introducing in-plane asymmetry, BICs turn to be quasi-BICs with finite but still high Q factors. Interestingly, the integer topological charge of BICs mode would split into two half integer charges, which symmetrically distribute in momentum space and correspond to left- and right-handed circular polarization states, also known as C points.

At the C points, incident light with one circular polarization state can be coupled into the nanostructures and produce dramatically enhanced local electromagnetic fields. The other polarization state is decoupled and almost perfectly transmit. Such characteristics are well known but rarely applied to light emissions. “This is mainly because the C points usually deviate from the bottom of band. They have relatively low Q factor and cannot be excited for lasing actions,” says Zhang.

To realize the chiral light emission, a key step is to combine the local density of states with the intrinsic chirality at C points. If one C point is shifted to the bottom of the band, the Q factor of the corresponding chiral quasi-BIC can be maximal. According to the Fermi’s golden rule, the radiation rate of one circularly polarized spontaneous emission is enhanced, whereas the other polarization is inhibited. Both the Q factor and the radiation rate reduces dramatically with the emission angle. As a result, high-purity and highly directional light emission can be expected near the Γ point.

“Of course, the other C point can support similar high chirality with opposite handedness. However, that point also deviates from the maximal Q factor and less be enhanced. Therefore, our metasurface only produces one near unity circular polarization with high directionality around the normal direction,” says Zhang.

In experiments, the researchers have fabricated the metasurfaces with a one-step slanted reactive ion etching process and characterized the emissions. Under the excitation of a nanosecond laser, they have successfully demonstrated the chiral emissions with a DOP of 0.98 and a far field divergent angle of 1.06 degree. “Our circularly light source is realized with the control of C point in momentum space and local density of state. It is independent of the excitation power,” says Zhang. “This is the reason that we can achieve the high Q, high directionality, and high purity circular polarization emission from spontaneous emission to lasing.”

Compared to conventional approaches, the chiral quasi-BIC provides a way to simultaneously modify and control spectra, radiation patterns, and spin angular momentum of photoluminescence and lasing without any spin injection. This approach may improve the design of current sources of chiral light and boost their applications in photonic and quantum systems.

Ghostly ‘mirror world’ might be cause of cosmic controversy

Provided by
Harbin Institute of Technology