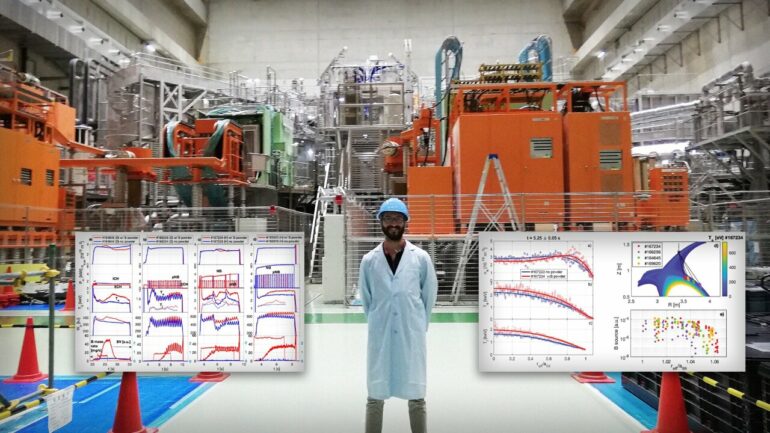 Scientists have found that adding a common household cleaning agent—the mineral boron contained in such cleaners as borax—can vastly improve the ability of some fusion energy devices to contain the heat required to produce fusion reactions on Earth the way the sun and stars do.

Physicists at the U.S. Department of Energy’s (DOE) Princeton Plasma Physics Laboratory (PPPL), working with Japanese researchers, made the observation on the Large Helical Device (LHD) in Japan, a twisty magnetic facility that the Japanese call a “heliotron.” The results demonstrated for the first time a novel regime for confining heat in facilities known as stellarators, similar to the heliotron. The findings could advance the twisty design as a blueprint for future fusion power plants.

Researchers produced the higher confinement regime by injecting tiny grains of boron powder into the LHD plasma that fuels fusion reactions. The injection through a PPPL-installed dropper sharply reduced turbulent swirls and eddies and raised the confined heat that produces the reactions.

“We could see this effect very clearly,” said PPPL physicist Federico Nespoli, lead author of a paper that detailed the process in the journal Nature Physics. “The more power we put into the plasma the bigger the increase in heat and confinement, which would be ideal in real reactor conditions.”

Said David Gates, a principal research physicist at PPPL who heads the Advanced Projects Department that oversaw the work, “I am very excited about these excellent results that Federico has written up in this important paper about our collaborations with the team on the Large Helical Device. When we launched this project—the LHD Impurity Powder Dropper—in 2018, we had hopes that there might be an effect on energy confinement. The observations are even better than we expected with turbulence suppression across a large fraction of the plasma radius. I am very grateful to our Japanese colleagues for giving us the opportunity for our team to participate in these experiments.”

The findings also delighted Japanese researchers. “We are very pleased and excited to get these results,” said Masaki Osakabe, executive director of the LHD project and science adviser for nuclear fusion research for MEXT, the Japanese ministry responsible for nuclear power. “We are also honored to be collaborators with PPPL,” Osakabe said. “The findings revealed with this collaboration will provide a nice tool to control the high-performance plasma in a fusion reactor.”

Stellarators, first constructed in the 1950s under PPPL founder Lyman Spitzer, are a promising concept that have long trailed symmetrical magnetic facilities called tokamaks as the leading device for producing fusion energy. A history of relatively poor heat confinement has played a role in holding back stellarators, which can operate in a steady state with little risk of the plasma disruptions that tokamaks face.

Fusion combines light elements in the form of plasma—the hot, charged state of matter composed of free electrons and atomic nuclei, or ions, that makes up 99 percent of the visible universe—to release massive amounts of energy. Tokamaks and stellarators are the principal magnetic designs for scientists seeking to harvest safe, clean and virtually limitless fusion power to generate fusion energy for humanity.

Although boron has long been used to condition walls and improve confinement in tokamaks, scientists have not previously seen “a widespread turbulence reduction and temperature increase like the one reported in this article,” according to the paper. Moreover, absent from the observations were damaging bursts of heat and particles, called edge localized modes (ELMs), that can occur in tokamaks and stellarators during high-confinement, or H-mode, fusion experiments.

The remarkable heat and confinement improvement in LHD plasma may have resulted from the reduction of what is called the ion temperature gradient (ITG) instability, the paper said, which produces turbulence that causes plasma to leak from confinement. The reduction of turbulence contrasts with a type of heat loss called “neoclassical transport,” the other main cause of particles escaping from stellarator confinement.

A new round of LHD experiments is now underway that will test whether the improvement in heat and confinement continues for an increased range of mass injection rates, plasma density, and heating power. Nespoli and colleagues would also like to see if carbon powder can work as well as boron. “Boron creates coating on the wall that is good for confinement and carbon will not do that,” he said. “We want to see if all powder is good or if it’s boron that makes conditions better.”

Additional goals include assessing the ability of boron to improve plasma performance during steady-state LHD operation, which is capable of extremely long plasma discharges of up to one hour. Such experiments could produce fresh evidence of the value of the stellarator design going forward.