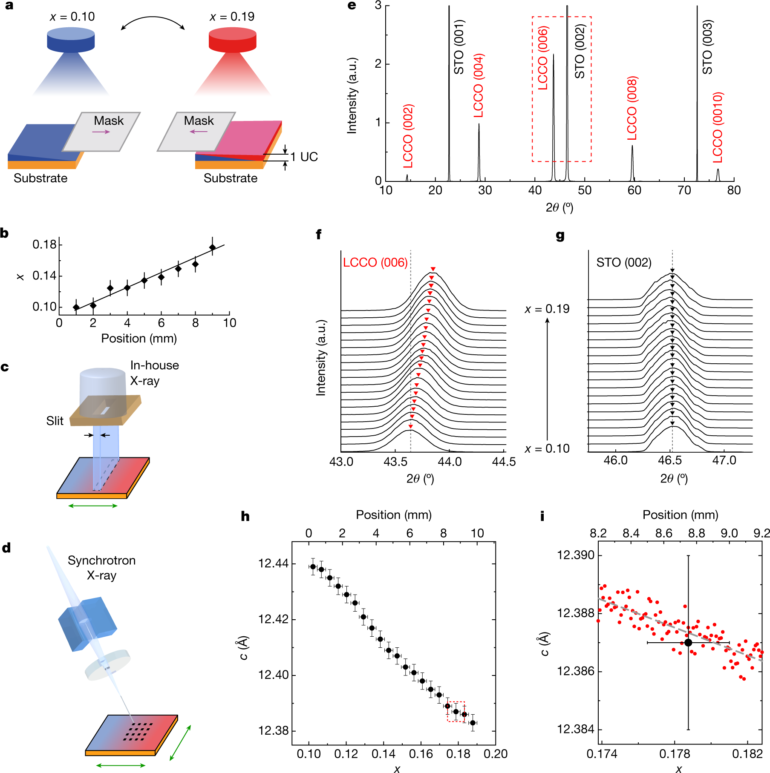 An international research team consisting of scientists at the Institute of Physics of the Chinese Academy of Sciences, University of Maryland (UMD), and Lawrence Berkeley National Laboratory has captured experimental evidence which sheds light on the mechanism of high temperature superconductivity in the so-called cuprate (copper oxide) superconductors which were first discovered in 1986. Results were published in Nature on Feb. 16.

After decades of concerted research effort by scientists all over the world, the exact mechanism of superconductivity remains elusive. Systematic experiments carried out by the joint team using the combinatorial approach have uncovered the precise quantitative relationship between the superconducting transition temperature Tc and the normal-state (the state where the material is no longer superconducting by increasing the temperature or applying magnetic field) resistivity in the electron-doped cuprate superconductor La2-xCexCuO4 for the first time.

In the combinatorial materials approach, a large compositional variation is generated on a single chip called a library. Usually, the combinatorial approach is used to explore and discover new materials through screening of a wide compositional landscape in a single experiment. Since 2013, the Institute of Physics group has been developing an advanced high-throughput technique consisting of combinatorial laser molecular beam epitaxy and multi-scale (microns to millimeters) on-chip rapid characterization schemes which can be applied to high-temperature-superconductivity research. After eight years, they were able to use a combinatorial library to map how superconducting properties and normal-state properties of the superconductor evolve with minute compositional variation with unprecedented resolution and accuracy.

In superconductors below the transition temperature Tc, electrons form pairs (known as Cooper pairs) which can then live and carry current in a coherent state with no electrical resistivity. The question the community has been after is: what is the particular mechanism which causes the pair formation in cuprate superconductors? The observed relationship from the study connects the strength of superconductivity with electron scattering, and thus it carries essential information about the inner workings of this family of superconductor.

This simple yet strange “linear in T” behavior in cuprates is believed to reflect the mechanism of superconductivity. The striking relation the team discovered, namely Tc ~ A0.5, where A is the linear temperature coefficient of the resistivity, has also been seen in other totally different families of superconductors including “the other” high-temperature superconductors, the so-called iron-based compounds, as well as a class of organic superconductors.

“More importantly, it indicates that the high-Tc superconductivity and the linear resistivity, two seemingly unrelated physical effects, are intimately connected. This delivers an important clue that may help us to unlock the mystery of the high-Tc mechanism,” said Xiang Tao, a condensed matter theorist from the Institute of Physics and the President of Beijing Academy of Quantum Information Sciences.

One origin which has always been discussed among the community is superconducting pair formation through interaction with spin fluctuations, which are waves of magnetic spinning tops each located at individual atom sites in the underlying crystal structure of the material. “Among the superconductor families we compared here, in at least one, the organic superconductor known as (TMTSF)2PF6, the accepted mechanism of superconductors is spin fluctuations, and therefore it is highly likely that the same or similar mechanism is at work in cuprates as well,” said Jin.

The key to successfully unveiling this subtle relationship between Tc and A for the first time was the high-precision composition control achieved on thin film libraries. “We were able to show that one can control and continuously track the composition of the compound, the parameter x in La2-xCexCuO4, with an accuracy of Δx = 0.0015. Such high-precision control of composition in this type of materials has never been demonstrated, and this is certainly not possible with bulk solid state chemistry,” said Ichiro Takeuchi, UMD faculty who helped pioneer the combinatorial approach, and another senior author of the present work.

In order to determine the composition at each point on the library with this precision, synchrotron micro-diffraction was carried out at Advanced Light Source (Lawrence Berkeley National Laboratory). The changing lattice constant of the compound was mapped with micrometer resolution across the library chip which was then used as the yardstick to measure the composition.

“The discovered scaling relation ties the superconductivity pairing strength to the diffusion process of charge carriers. It is also the first relation linking the superconductivity to a specific property in the normal states. Thus, it is a critical clue for us to determine the elusive pairing mechanisms of high temperature superconductivity,” said Hu Jiangping, the theorist in this work and also the Deputy Director of the Institute of Physics.

“More than three decades after the discovery of cuprate superconductors, the smoking gun evidence is still lacking for deciphering its underlying mechanism. Precise quantitative scaling laws deserve special attention from the community,” said Zhao Zhongxian, a renowned superconducting materials scientist who founded the National Lab for Superconductivity at the Institute of Physics and also the winner of the Highest Science and Technology Awards in China.

There are many more mysteries left in the cuprate superconductors. The research team plans to continue systematically going after them using the combinatorial approach to explore the other key elements in generating the high-Tc superconductivity.