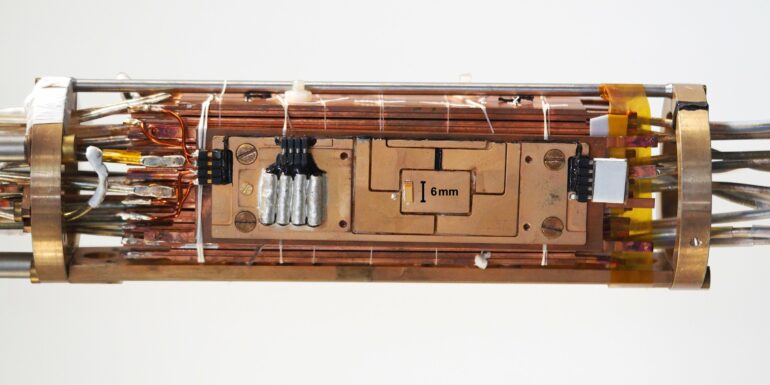 When materials are cooled down to extremely low temperatures, their behavior often differs strongly from that at room temperature. A well-known example is superconductivity: below a critical temperature some metals and other substances conduct electric current without any losses. At even lower temperatures additional quantum-physical effects can occur, which are relevant for basic research as well as for applications in quantum technologies.

However, to reach such temperatures—less than a thousandth of a degree above the absolute zero of 0 Kelvin, or -273.15 degrees Celsius—is exceedingly difficult. Physicists in the research group of Prof. Dr. Dominik Zumbühl at the University of Basel, together with colleagues at the VTT Technical Research Centre in Finland and at Lancaster University in England, have now set a new low-temperature record. Their results have just been published in Physical Review Research.

“Cooling a material down very strongly is not the only problem,” explains Christian Scheller, a senior scientist in Zumbühl’s laboratory. “One also has to reliably measure those extremely low temperatures.”

In their experiments, the researchers cooled a tiny electric circuit made of copper on a silicon chip by first exposing it to a strong magnetic field, then cooling it with a special fridge known as a cryostat and eventually ramping down the magnetic field slowly. In this way, the nuclear spins of the copper atoms in the chip were initially aligned like small magnets and effectively cooled down even further when, at the end, ramping down the magnetic field led to a decrease in their magnetic energy.

“We’ve been working with such techniques for a decade now, but so far the lowest temperatures that could be reached in this way were limited by the vibrations of the fridge,” says Omid Sharifi Sedeh, who was involved in the experiments as a Ph.D. student.

Those vibrations, which arise from the continuous compression and rarefaction of the cooling agent helium in a so-called “dry” cryostat, significantly heat up the chip. To avoid that, the researchers developed a new sample holder that is wired so strongly that the chip can be cooled to very low temperatures despite the vibrations.

To accurately measure those temperatures, Zumbühl and his collaborators improved a special thermometer that is integrated into the circuit. The thermometer consists of copper islands that are connected by so-called tunnel junctions. Electrons can move through those junctions more or less easily depending on the temperature.

The physicists found a method to make the thermometer more robust against material defects and, at the same time, more temperature-sensitive. This allowed them, finally, to measure a temperature of just 220 millionths of a degree above absolute zero (220 micro Kelvin).

Magnetic spins that ‘freeze’ when heated

In the future, the Basel researchers want to use their method to lower the temperature by another factor of ten and, in the long run, also cool semiconductor materials. That will pave the way towards studies of new quantum effects and diverse applications, such as the optimization of qubits in quantum computers.