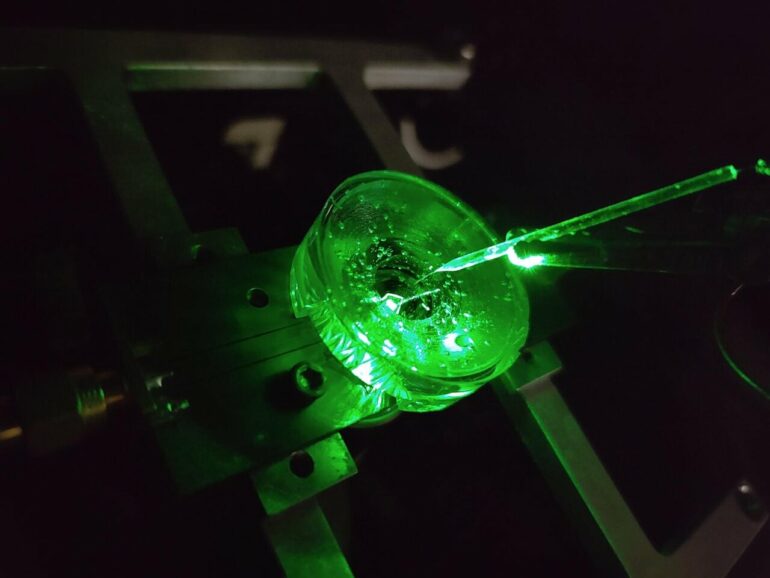 The brain is arguably one of the most complex structures in the known universe.

Continued advances in our understanding of the brain and our ability to effectively treat a host of neurological diseases rely on probing the brain’s neural micro-circuitry with ever-increasing detail.

One class of methods for studying neural circuits is called voltage imaging. These techniques allow us to see the voltage generated by our brain’s firing neurons—telling us how networks of neurons develop, function and change over time.

Today, voltage imaging of cultured neurons is performed using dense arrays of electrodes onto which cells are grown (or cultured), or by applying light-emitting dyes that respond optically to changes in voltage on the surface of the cell.

But the level of detail we can see using these techniques is restricted.

The smallest electrodes can’t reliably distinguish individual neurons, some 20 millionths of a meter across, to say nothing of the dense network of nanoscale connections that forms between them, and no significant technological advances have been made in this area for over two decades.

Furthermore, each electrode requires its own wired connection and amplifier, placing significant limitations on the number of electrodes that can be measured simultaneously.

Dyes can overcome these limitations by imaging the voltage wirelessly as light—this means the complex electronics can be situated away from the cells within a camera.

The result is high resolution over large areas, able to distinguish each individual neuron in a large network. But there are limitations here too, the voltage responses of state-of-the-art dyes are slow and unstable.

Developed by a team of physicists from the University of Melbourne and RMIT University, the device uses a diamond-based sensor that converts voltage signals at its surface directly into optical signals—this means we can see electrical activity as it happens.

The conversion uses the properties of an atom-scale defect in the diamond’s crystal structure known as the nitrogen-vacancy (NV).

NV defects can be engineered by bombarding the diamond with a nitrogen ion beam using a special type of particle accelerator. The fabrication of the sensor begins with using this process to create a high-density, ultra-thin layer of NV defects close to the diamond’s surface.

A previously discovered property of NV defects is that the number of electrons they hold—and the resulting fluorescence—can be controlled with a voltage. Unlike dyes, the voltage response of an NV defect is very fast and stable.

Our research aims to overcome the challenge of making this effect sensitive enough to image neuronal activity.

On the diamond’s surface, the crystal structure ends with a layer one atom thick, made up of hydrogen and oxygen atoms. The NV defects closest to the surface are the most sensitive to changes in voltage outside the diamond, but they are also highly sensitive to the atomic makeup of the surface layer.

So, there’s a “Goldilocks’ zone” for voltage imaging, where the surface has just the right amount of hydrogen.

To reach this zone, our team developed an electrochemical method for removing hydrogen in a controlled way. By doing this, we’ve managed to achieve voltage sensitivities two orders of magnitude better than what has been previously reported.

We tested our sensor in salty water using a microscopic wire 10-times thinner than a human hair. By applying a current, the wire can produce a small cloud of charge in the water above the diamond. The formation and subsequent diffusion of this charge cloud produces small voltages at the diamond surface.

Turning to the laws of physics to study how cells move

By capturing these voltages through a high-speed recording of the NV fluorescence, we can determine the speed, sensitivity and resolution of our diamond imaging chip.

We were able to further boost sensitivity by patterning the diamond’s surface into ‘nanopillars’—conical structures with the NV centers embedded in their tips. These pillars funnel the light emitted by the NVs towards the camera, dramatically increasing the amount of signal we can collect.

With the development of the diamond voltage imaging microscope for detecting neuronal activity, the next step is the recording of activity from cultured neurons in vitro—these are experiments on cells grown outside their normal biological context, otherwise known as test-tube or petri-dish experiments.

What differentiates this technology from existing state-of-the-art in vitro techniques is the combination of high spatial resolution (on the order of a millionth of a meter or less), large spatial scale (a few millimeters in each direction—which for a network of neurons in mammals is quite vast), and complete stability over time.

No other existing system can simultaneously offer these three qualities, and it’s this combination that will allow our made-in-Melbourne technology to make a valuable contribution to the work of neuroscientists and neuropharmacologists globally.

Our system will aid these researchers in pursuing both fundamental knowledge and the next generation of treatments for neurological and neurodegenerative diseases.