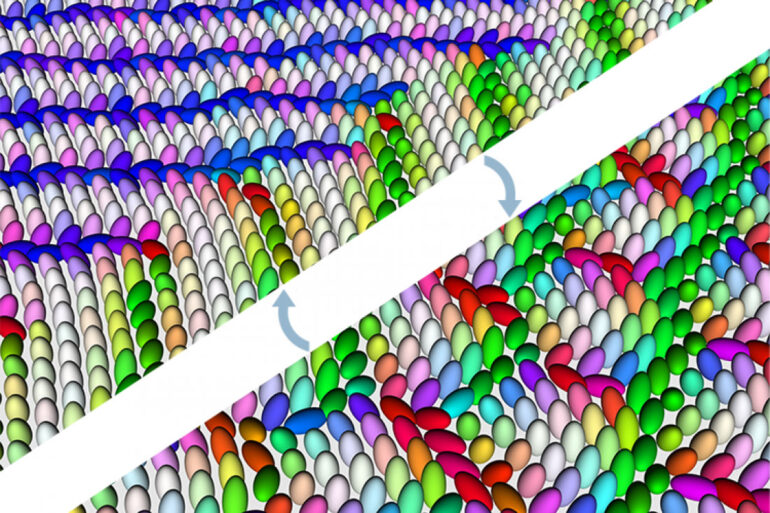 Harnessing the properties of materials so that technology can continue to move forward means getting to grips with increasingly more challenging systems. A team led by a researcher from the Institute of Industrial Science at the University of Tokyo has turned its focus to chiral molecular and colloidal crystals, revealing the role of emergent elastic fields and their behavior. Their findings are published in Proceedings of the National Academy of Sciences.

It is easy for most people to picture the properties of the basic phases of matter we learn about at school. However, the frontiers of technology often draw on areas where things are less clear cut. For example, liquid crystal phases combine the molecule mobility of liquids and ordering or solids, and this has allowed them to be applied in displays for a huge range of consumer devices. The transitions within these more complex phases can also be challenging to visualize.

Topological phase transitions involve the rearrangement of the components of a material—whether they are molecules or particles—into helix or vortex-like structures, known as skyrmions. The role that topological phase transitions play in certain chiral materials, such as liquid crystals and metal-organic frameworks, has been explored previously. However, it has not been investigated for chiral molecular or colloidal crystals. Chirality is the property of handedness, a good example of which is that our hands appear the same, but in fact do not stack on top of each other—they are non-superimposable mirror images.

The researchers created a model that allowed them to assess the interaction between the intermolecular chiral twisting and spheroidal steric interactions in two-dimensional chiral molecular and colloidal crystals.

“Our model revealed that the competition between chiral twisting and steric anisotropy induced emergent elastic fields in the crystals,” explains study author Kyohei Takae. “This gives us the potential to control the phase transitions, providing us with a useful switch when developing applications.”

The researchers demonstrated that the elastic coupling of the phase could be controlled using external triggers such as changing the temperature or applying an electromagnetic field or anisotropic stress.

“Identifying the fundamental factors that underlie the behavior of materials is the first step in the development of new technologies,” says Dr. Kyohei Takae. “Our model has successfully demonstrated the importance of emergent elastic fields in chiral molecular crystals and is expected to make a significant contribution to future progress in electro- and magneto-mechanical devices.”

The study, “Emergent elastic fields induced by topological phase transitions: Impact of molecular chirality and steric anisotropy,” was published in Proceedings of the National Academy of Sciences.