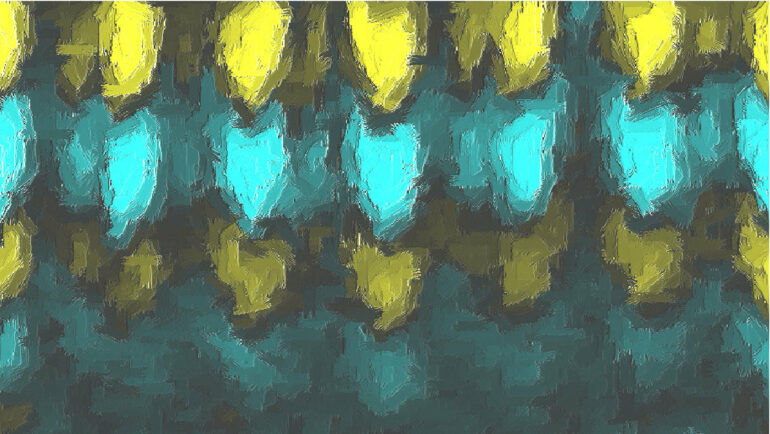 One of the biggest achievements of quantum physics was recasting our vision of the atom. Out was the early 1900s model of a solar system in miniature, in which electrons looped around a solid nucleus. Instead, quantum physics showed that electrons live a far more interesting life, meandering around the nucleus in clouds that look like tiny balloons. These balloons are known as atomic orbitals, and they come in all sorts of different shapes—perfectly round, two-lobed, clover-leaf-shaped. The number of lobes in the balloon signifies how much the electron spins about the nucleus.

That’s all well and good for individual atoms, but when atoms come together to form something solid—like a chunk of metal, say—the outermost electrons in the atoms can link arms and lose sight of the nucleus from where they came, forming many oversized balloons that span the whole chunk of metal. They stop spinning about their nuclei and flow through the metal to carry electrical currents, shedding the diversity of multi-lobed balloons.

Now, researchers at the Quantum Materials Center (QMC) at the University of Maryland (UMD), in collaboration with theorists at the Condensed Matter Theory Center (CMTC) and Joint Quantum Institute (JQI), have produced the first experimental evidence that one metal—and likely others in its class—have electrons that manage to preserve a more interesting, multi-lobed structure as they move around in a solid. The team experimentally studied the shape of these balloons and found not a uniform surface, but a complex structure. This unusual metal is not only fundamentally interesting, but it could also prove useful for building quantum computers that are resistant to noise.

The researchers recently published their findings in the journal Physical Review Research.

“When I first discovered this, I was so excited,” says Hyunsoo Kim, a former postdoctoral researcher at QMC and lead author of the work. “But it took years to fully study, because it’s not a conventional concept and also experimentally very challenging to collect high-quality data.”

Back in 2011, the team first discovered that the metal in question—yttrium platinum bismuth, or YPtBi—could become a superconductor. Some materials become superconductors at low enough temperatures, losing all resistance to electrical current. YPtBi was an unlikely candidate for superconductivity because it has many fewer mobile, current-carrying electrons than most superconductors. But, to the researchers’ surprise, it became superconducting anyway. Furthermore, the way it behaved when exposed to a magnetic field provided evidence that it was no ordinary superconductor.

At the time, the researchers suspected that the shape of the electron orbitals was to blame and concluded that electrons that spin about themselves and trace out more circles in space—that is, electrons with higher angular momentum—were forming an unprecedented state of superconductivity.

To gather more direct evidence in the new experiments, the team raised the temperature and studied the material in its normal, non-superconducting state. Then, they performed a classic measurement that maps out something akin to the collective atomic orbital for all the electrons floating around in the metal.

Peering inside a metal, one sees atoms arranged in neat repeating grids, called a crystal lattice. In a crystal, the atomic orbitals of the outermost electrons morph into one another. This allows the electrons to travel far from their original nucleus and carry current through the metal. In this solid setting, a version of orbital balloons still exists, but it’s more common to visualize them not in space—where there are many huge and unwieldy orbitals—but as a function of the speed and direction of the traveling electrons. The fastest moving electrons in the crystal form their own balloon, a collective analog of atomic orbitals known as a Fermi surface.

“The fact that nature figures out counterintuitive atomic arrangements that allow the Fermi surface to retain signatures of the atomic orbitals is rather cool and intricate,” says JQI Co-Director and Fellow Jay Deep Sau, an associate professor of physics at UMD and a theoretical collaborator on the new paper.

To uncover this cool, counterintuitive Fermi surface, the researchers stuck a YPtBi crystal inside a magnetic field and measured the current flowing through the crystal as they tuned the field. By rotating the direction of the magnetic field, they were able to map out the speed of the fastest electrons in every direction. They found that akin to a higher angular momentum atomic orbital, the Fermi surface has a complex shape to it, with peaks and troughs along certain directions. The high symmetry of the crystal itself would normally lead to a more uniform, ball-like Fermi surface, so it was a surprise to find a more complicated structure. This pointed to the possibility that the collective electrons were exhibiting some of the higher angular momentum nature of atomic orbitals.

Fastest-ever study of how electrons respond to X-rays performed

Indeed, theoretical calculations by the CMTC team showed that the experimental results matched up with a high angular momentum model, leading the team to claim the first experimental observation of a high-angular momentum metal. The team cautions that even this experimental evidence could still be incomplete. What they measured depends not only on the Fermi surface but also on other properties of the electrons, such as their effective mass and the distribution of their velocities. In their work, the team systematically studied the angular dependence of these other quantities and demonstrated that it would be extremely unlikely for them to cause the observed peaks and troughs.

In addition to being fundamentally novel, this higher angular momentum metal has potential applications for quantum computing. There are predictions that some exotic superconducting states could give rise to properties that are unaffected by the noise that happens at any one point. These properties might be able to encode quantum bits, potentially allowing for the creation of quantum computers that are much more robust. Whether YPtBi is exotic in the right way for this to occur remains to be seen, but the new work is a significant step toward figuring it out.

“There’s many pieces to the puzzle of understanding exactly what kind of superconductor you have and whether you can exploit it to do quantum computation,” says Paglione. “There are some experimental challenges to get the rest of the pieces of the puzzle. But I think we’re a good chunk of the way there.”