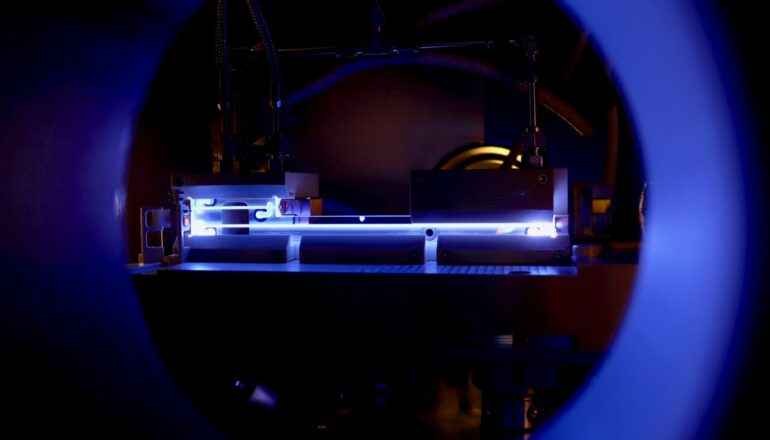 An international team of researchers led by DESY scientists has demonstrated for the first time at the FLASHForward experiment that, in principle, it is possible to operate plasma accelerators at the repetition rates desired by particle physicists and photon scientists. This opens the opportunity to utilize such high-gradient accelerators as booster stages in existing high-repetition-rate facilities, such as the large-scale X-ray free-electron lasers FLASH and European XFEL, in order to significantly increase the energy of long trains of particles in short distances. The team presents the results of their studies in the journal Nature today.

Plasma acceleration is an innovative technology for application to the next generation of particle accelerators due to both its compactness and versatility, with the aim being to utilize the accelerated electrons for various fields of application in science, industry, and medicine. The acceleration takes place in an extremely thin channel—typically only a few centimeters long—which is filled with an ionized gas, the plasma. A high-energy laser or particle beam fired through the plasma can excite a strong electromagnetic field—a kind of “wake”—which can be used to accelerate charged particles. In this way, plasma accelerators can achieve acceleration gradients up to a thousand times higher than the most powerful accelerators in use today. They could thus drastically reduce the size of kilometer-scale facilities such as particle colliders or free-electron lasers.

Modern accelerators for cutting-edge science must also meet high requirements in terms of efficiency, beam quality, and number of bunches accelerated per second. In order to generate a particularly large number of light flashes or particle collisions in the shortest possible time, thousands or even millions of densely packed particle bunches must be propelled through accelerators in a single second. Plasma accelerators would, therefore, have to achieve a similar repetition rate in order to be competitive with state-of-the-art particle-accelerator technology. Current test facilities for plasma acceleration are usually operated at much slower repetition rates in the range of one to ten accelerations per second. The team led by DESY researcher Jens Osterhoff has now proven that much higher rates are possible. “At FLASHForward we were able to show for the first time that, in principle, repetition rates in the megahertz range are supported by the plasma acceleration processes,” says Osterhoff.

At FLASHForward the accelerating wave—the so-called wakefield in the plasma—is generated by an electron bunch from the FLASH accelerator that plows through the plasma at almost the speed of light. The electrons of this “drive beam” cause the freely moving electrons of the plasma to oscillate in its wake and thus generate very strong electric fields. These fields accelerate the electrons of a particle packet flying directly behind the driver bunch.

“Unlike in conventional accelerators, where long-living electromagnetic waves stored in a resonating cavity can accelerate several particle bunches in quick succession, the electromagnetic fields generated in plasma decay very quickly after each acceleration process,” explains Richard D’Arcy, first author of the study. “To start a new similar acceleration process, the plasma electrons and ions must then have ‘recovered’ to approximately their initial state such that the acceleration of the next pair of particle bunches is not modified by that of the previous one.”

In their experiments, the scientists took advantage of the highly flexible superconducting FLASH accelerator to generate particle bunches with extremely short temporal spacings. The first bunch generated plowed through the plasma, driving a high-strength wakefield and thus perturbing the plasma in its wake. At variable intervals thereafter, pairs of particle bunches were sent through the plasma cell; the first driving a second wakefield and the second being accelerated by the resulting fields. The properties of these subsequent bunches were precisely measured by the experimenters and compared with those of bunches that had experienced this process in an undisturbed plasma. The result: After about 70 billionths of a second (70 nanoseconds), it was no longer possible to distinguish whether the second acceleration had taken place in a previously disturbed or undisturbed plasma.

“We were able to precisely observe the decay of the perturbation, which reached completion within the first 70 nanoseconds, and to explain it exactly in simulations,” says D’Arcy. “In subsequent measurements, we want to check how different framework conditions in the setup influence the recovery time of the plasma wave.” For example, the heating of the plasma medium due to high-frequency operation may have an influence on how quickly the plasma takes to replenish.

The current findings, which involved scientists from DESY, University College London, and the Universities of Oxford and Hamburg, open the door for equipping today´s particle accelerators, which are operated at repetition rates in the kilohertz-to-megahertz regime, with plasma accelerator modules acting as booster stages to significantly increase the particle energy over the shortest distance. “The findings have a profound impact on the potential for implementation of the plasma technology towards future high repetition rate facilities for which DESY is world renowned,” concludes Wim Leemans, Director of the Accelerator Division at DESY.

More control in delivering light to human tissue and other systems