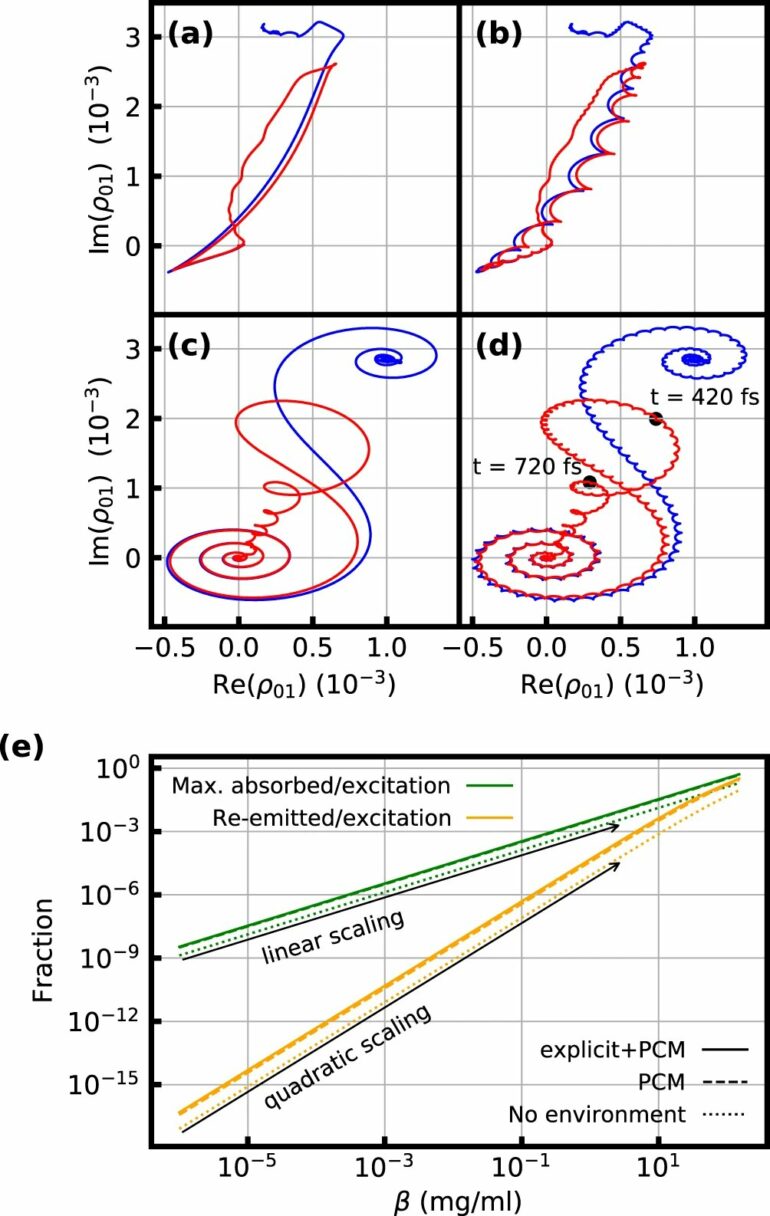 When light impinges on molecules, it is absorbed and re-emitted. Advances in ultrafast laser technology have steadily improved the level of detail in studies of such light-matter interactions.

FRS, a laser spectroscopy method in which the electric field of laser pulses repeating millions of times per second is recorded with time resolution after passing through the sample, now provides even deeper insights: Scientists led by Prof. Dr. Regina de Vivie-Riedle (LMU/Department of Chemistry) and PD Dr. Ioachim Pupeza (LMU/Department of Physics, MPQ) show for the first time in theory and experiment how molecules gradually absorb the energy of the ultrashort light pulse in each individual optical cycle, and then release it again over a longer period of time, thereby converting it into spectroscopically meaningful light.

The study elucidates the mechanisms that fundamentally determine this energy transfer. It also develops and verifies a detailed quantum chemical model that can be used in the future to quantitatively predict even the smallest deviations from linear behavior.

A child on a swing sets it in motion with tilting movements of the body, which must be synchronized with the swing movement. This gradually adds energy to the swing, so that the deflection of the swing increases over time. Something similar happens when the alternating electromagnetic field of a short laser pulse interacts with a molecule, only about 100 trillion times faster: When the alternating field is synchronized with the vibrations between the atoms of the molecule, these vibration modes absorb more and more energy from the light pulse, and the vibration amplitude increases.

Researchers from the attoworld team at MPQ and LMU, in collaboration with LMU researchers from the Department of Chemistry (Division of Theoretical Femtochemistry), have now distinguished these two constituent parts of the light field—on the one hand, the exciting light pulses, and on the other, the decaying light field oscillations—using time-resolved spectroscopy. In doing so, they investigated the behavior of organic molecules dissolved in water.

“While established laser spectroscopy methods usually only measure the spectrum and thus do not allow any information about the temporal distribution of the energy, our method can precisely track how the molecule absorbs a little more energy with each subsequent oscillation of the light field,” says Ioachim Pupeza, head of the experiment.

That the measurement method allows this temporal distinction is best illustrated by the fact that the scientists repeated the experiment, changing the duration of the exciting pulse but without changing its spectrum. This makes a big difference for the dynamic energy transfer between light and the vibrating molecule: Depending on the temporal structure of the laser pulse, the molecule can then absorb and release energy several times during the excitation.

In order to understand exactly which contributions are decisive for the energy transfer, the researchers have developed a supercomputer-based quantum chemical model. This can explain the results of the measurements without the aid of measured values. “This allows us to artificially switch off individual effects such as the collisions of the vibrating molecules with their environment, or even the dielectric properties of the environment, and thus elucidate their influence on the energy transfer,” explains Martin Peschel, one of the first authors of the study.

In the end, the energy re-emitted during the decaying light field oscillations is decisive for how much information can be obtained from a spectroscopic measurement. The work thus makes a valuable contribution to better understanding the efficiency of optical spectroscopies, for example with regard to molecular compositions of fluids or gases, with the objective of improving it further and further.

The research is published in Nature Communications.