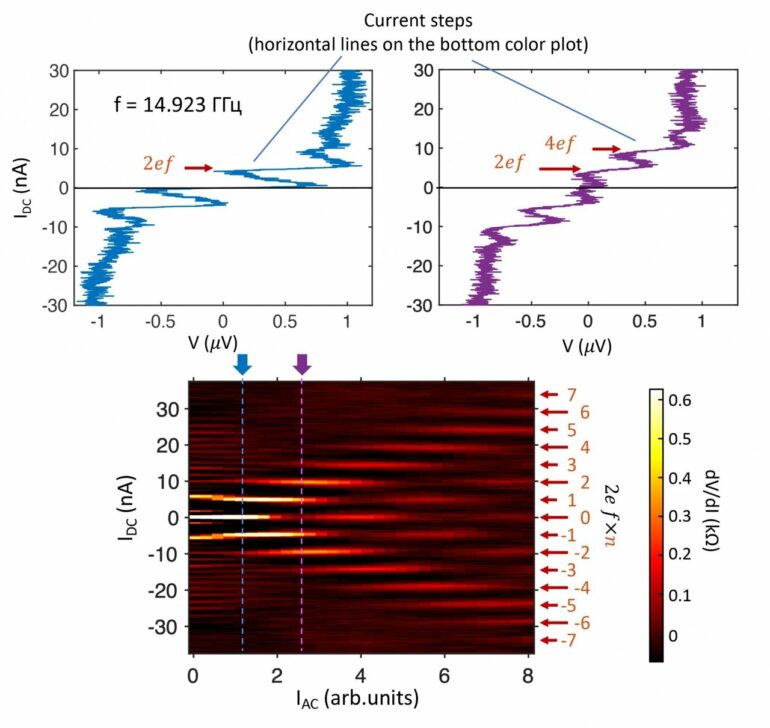 An experimental discovery of a fundamental physical phenomenon is not something that happens often. Yet this is what Skoltech researchers and their European colleagues recently managed to do: In their paper in Nature, they report the experimental demonstration of the so-called AC coherent quantum phase-slip effect. It holds promise comparable to that of the Josephson effect, which underlies the present-day standard of voltage and ultrasensitive magnetic field sensors.

The AC coherent quantum phase-slip effect manifests itself as a steps pattern in the electrical current flowing through superconducting nanowires exposed to microwaves. The nanowire serves as a tunnel barrier for the magnetic flux quanta, similarly to how a thin layer of insulator between two superconductors—known as a Josephson junction—serves as a tunnel barrier for electrical charges. (Predicted in 1962 by British scientist Brian Josephson and named in his honor, the Josephson junction earned him the 1973 Nobel Prize in physics.)

From the perspective of classical physics, a Josephson junction is no different from a circuit break. However, owing to the quantum mechanical tunneling effect, current can flow right through without any resistance. Similarly, while classical physics does not permit that magnetic flow should “jump” the nanowire barrier, it nevertheless can tunnel right through thanks to the laws of quantum physics.

The AC coherent quantum phase-slip effect could have as much potential as the Josephson effect. The latter came to be the foundation of ultrasensitive magnetic field sensors, used, among other things, to detect the very weak magnetic fields generated in the brain. Another application of Josephson junctions has to do with the fact that, under microwave exposure, current flowing through the junction can exhibit voltage “steps” instead of changing in a smooth manner.

These so-called Shapiro steps underlie quantum metrology: The present-day standard of 1 volt relies on devices with Josephson junctions rather than a reference chemical accumulator housed at an office of weights and measures. Similarly, the AC coherent quantum phase-slip effect could be the foundation for a quantum standard of 1 ampere. “This enables unprecedented precision, because with both of these effects, the step size is determined by fundamental laws of nature. Given superconductivity, it does not depend on the external conditions or materials used in any way,” the study’s principal investigator, Professor Oleg Astafiev of Skoltech, commented.

In their study in Nature, the research group from Skoltech led by Astafiev—who also heads the Artificial Quantum Systems Lab at MIPT—reports observations of the AC coherent quantum phase-slip effect, one of the few remaining fundamental physical effects of superconductivity that were theoretically predicted but not experimentally realized. It manifests itself as reverse, or dual, Shapiro steps in superconducting nanowires, whose current-voltage plots exhibit current steps as voltage is varied. This is analogous to the voltage steps in the long-known Shapiro effect in Josephson junctions.

Predicted as early as the ’90s by Soviet physicists Konstantin Likharev, Alexander Zorin, and Dmitri Averin from Lomonosov Moscow State University, such current steps have until now eluded experimental observation. In the recent study, the international research group headed by Astafiev employed a novel approach. Crucial to the success of the experiment was the nanowire material they chose—thin films of niobium nitride—as well as a fairly peculiar circuit design: The researchers deposited micron-sized inductive components, also made of niobium nitride, next to the nanowire.

The observation of reverse Shapiro steps does more than confirm the existence of this fundamental physical phenomenon. The experiment also lays the groundwork for creating novel devices useful for fundamental research, metrological standard development, and other technological applications.


Citation:
Fundamental effect of superconductor physics observed 30 years after it was predicted (2022, August 23)