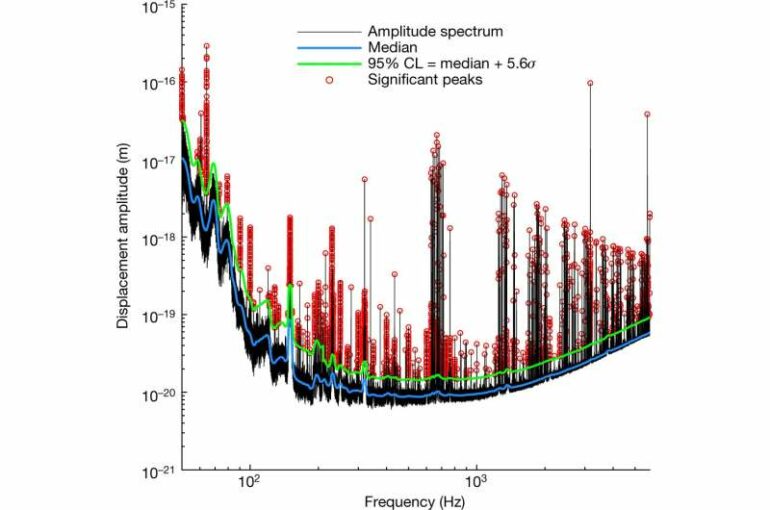 The technologies behind one of the biggest scientific breakthroughs of the century—the detection of gravitational waves—are now being used in the long-standing search for dark matter.

Thought to make up roughly 85 percent of all matter in the universe, dark matter has never been observed directly and remains one of the biggest unsolved mysteries in modern physics.

With extremely sensitive detectors now at their disposal, already proven through several outstanding discoveries, scientists believe that existing gravitational wave technology has the true potential to finally discover the exotic material and even find out what it is made of.

In a study published today in Nature, a team led by scientists from Cardiff University’s Gravity Exploration Institute has taken the first step towards this goal by using the instruments, known as laser interferometers, to look for a new kind of dark matter for the very first time.

Until recently, it was widely believed that dark matter was composed of heavy elementary particles.

These were not discovered despite a multitude of efforts, and scientists are now turning to alternative theories to explain dark matter.

A recent theory says that dark matter is actually something called a scalar field, which would behave as invisible waves bouncing around galaxies, including our own Milky Way.

“We realized our instruments could be used to hunt for this new kind of dark matter, although they were initially designed for detecting gravitational waves,”‘ said Professor Hartmut Grote, from Cardiff University’s Gravity Exploration Institute, who instigated the investigation.

Within a laser interferometer, two beams of light are bounced between mirrors before meeting up on a detector. From this, scientists can gauge with great accuracy how out of sync the beams of light are with each other, which is itself proxy for any disturbance the beams encounter.

The Laser Interferometer Gravitational-Wave Observatory (LIGO) consists of two interferometers located in the US, each with two 4 km long arms arranged in the shape of an “L,” which were used to detect gravitational waves for the very first time in 2015, and many times since.

The UK/German GEO 600 detector in Germany, where Grote was lead scientist from 2009 to 2017, is another highly sensitive interferometer and was used to develop much of the technology needed to detect gravitational waves.

The GE0600 detector was used, for the very first time, in this study to search specifically for dark matter.

“Scalar field dark matter waves would pass right through the Earth and our instruments, but as they do so, would cause objects such as mirrors to vibrate ever so slightly,”‘ said lead investigator Sander Vermeulen, also from Cardiff University’s Gravity Exploration Institute.

“Vibrations of mirrors would disturb the beams of light in instruments like GEO600 or the LIGO detectors in a particular way characteristic of dark matter, which is something we should be able to detect, depending on the exact properties of that dark matter.”

Even though dark matter has never been directly detected, scientists suspect it exists due to its gravitational effect on objects across the universe. For example, a large amount of unseen matter may explain why galaxies rotate as they do, and how they could have formed in the first place.

Though the team were unsuccessful in making any sort of detection in this new study, they say they are making important first strides in terms of introducing this technology to dark matter searches and have already made progress in terms of narrowing down certain parameters for future studies.

“I was surprised by how sensitive an instrument can be for hunting dark matter when it was built for an entirely different purpose originally,” continued Professor Grote.

“We have definitively ruled out some theories that say dark matter has certain properties, so future searches now have a better idea of what to look for,” said Vermeulen.

“We believe these new techniques have the true potential to discover dark matter at some point in the future.”