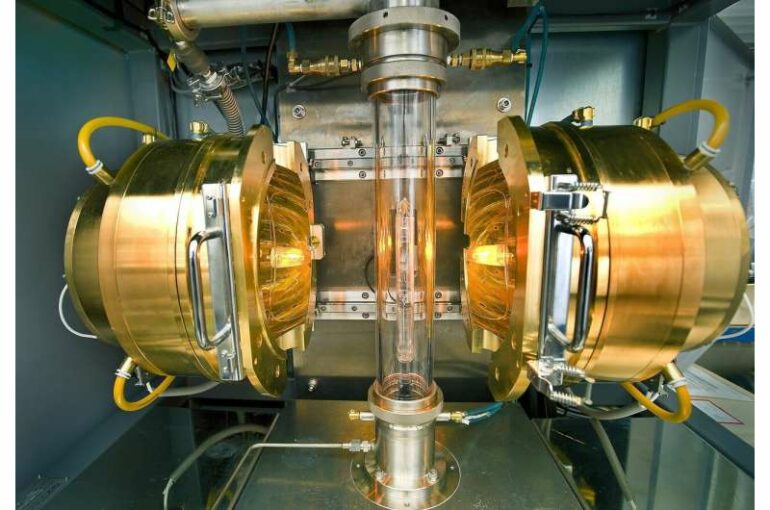 When two superconducting regions are separated by a strip of non-superconducting material, a special quantum effect can occur, coupling both regions: The Josephson effect. If the spacer material is a half-metal ferromagnet, novel implications for spintronic applications arise. An international team has now, for the first time, designed a material system that exhibits an unusually long-range Josephson effect. Here, regions of superconducting YBa2Cu3O7 are separated by a region of half-metallic, ferromagnetic manganite (La2/3Sr1/3MnO3) one micron wide.

With the help of magneto-transport measurements, the researchers were able to demonstrate the presence of a supercurrent circulating through the manganite—this supercurrent is arising from the superconducting coupling between both superconducting regions, and thus a manifestation of a Josephson effect with a macroscopic long range.

In addition, the scientists explored another interesting property with profound consequences for spintronic applications. In superconductors electrons pair together in so-called Cooper pairs. In the vast majority of superconducting materials, these pairs are composed by electrons with opposite spin in order to minimize the magnetic exchange field, which is detrimental for the stabilization of superconductivity. The ferromagnet used by the international team has been a half-ferromagnet for which only one spin type electron is allowed to circulate. The fact that a supercurrent has been detected within this material implies that the Cooper pairs of this supercurrent must be composed by electrons having the same spin. This so-called “triplet” superconductivity is extremely rare.

“At the XMCD-PEEM station at BESSY II, we mapped and measured the magnetic domains within the manganite spacer. We observed wide regions homogeneously magnetized and connecting the superconducting regions. Triplet spin pairs can propagate freely in these,” explains Dr. Sergio Valencia Molina, HZB physicist, who supervised the measurements at BESSY II.

Superconducting currents flow without resistance, which makes them appealing for low-power consumption applications. In the present case, this current is made of electrons with equal spins. Such spin polarized currents could be used in novel superconducting spintronic applications for the transport (over long distances) and reading/writing of information while profiting from the stability imposed by the macroscopic quantum coherence of the Josephson effect.

The new device made of the superconducting and ferromagnetic components therefore opens up opportunities for superconducting spintronics and new perspectives for quantum computing.