High-performance visible-light lasers that fit on a fingertip 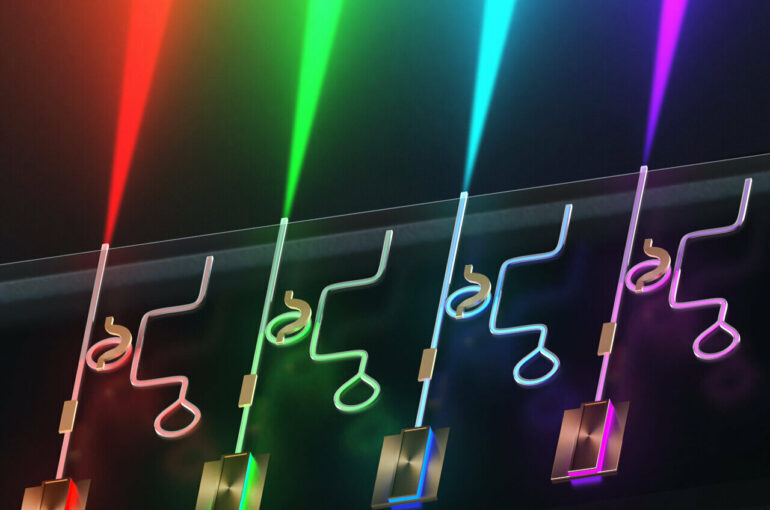 As technologies keep advancing at exponential rates and demand for new devices rises accordingly, miniaturizing systems into chips has become increasingly important. Microelectronics has changed the way we manipulate electricity, enabling sophisticated electronic products that are now an essential part of our daily lives. Similarly, integrated photonics has been revolutionizing the way we control light for applications such as data communications, imaging, sensing, and biomedical devices. By routing and shaping light using micro- and nanoscale components, integrated photonics shrinks full optical systems into the size of tiny chips.

Despite its success, integrated photonics has been missing a key component to achieve complete miniaturization: high-performance chip-scale lasers. While some progress has been done on near-infrared lasers, the visible-light lasers that currently feed photonic chips are still benchtop and expensive. Since visible light is essential for a wide range of applications including quantum optics, displays, and bioimaging, there is a need for tunable and narrow-linewidth chip-scale lasers emitting light of different colors.

Inventing high-performance lasers that fit on a fingertip

Researchers at Columbia Engineering’s Lipson Nanophotonics Group have created visible lasers of very pure colors from near-ultraviolet to near-infrared that fit on a fingertip. The colors of the lasers can be precisely tuned and extremely fast—up to 267 petahertz per second, which is critical for applications such as quantum optics. The team is the first to demonstrate chip-scale narrow-linewidth and tunable lasers for colors of light below red—green, cyan, blue, and violet. These inexpensive lasers also have the smallest footprint and shortest wavelength (404 nm) of any tunable and narrow-linewidth integrated laser emitting visible light. The study, which was first presented at the CLEO 2021 post-deadline session on May 14, 2021, was published online December 23, 2022, by Nature Photonics.

“What’s exciting about this work is that we’ve used the power of integrated photonics to break the existing paradigm that high-performance visible lasers need to be benchtop and cost tens of thousands of dollars,” says the study’s lead author Mateus Corato Zanarella, a Ph.D. student who works with Michal Lipson, Higgins Professor of Electrical Engineering and professor of applied physics. “Until now, it’s been impossible to shrink and mass-deploy technologies that require tunable and narrow-linewidth visible lasers. A notable example is quantum optics, which demands high-performance lasers of several colors in a single system. We expect that our findings will enable fully integrated visible light systems for existing and new technologies.”

Benefits of emitting wavelengths below red

The importance of lasers emitting wavelengths shorter than red is clear when you consider some important applications. Displays, for example, require red, green, and blue light simultaneously to compose any color. In quantum optics, green, blue, and violet lasers are used for trapping and cooling atoms and ions. In underwater Lidar (Light Detection and Ranging), green or blue light is needed to avoid water absorption. However, at wavelengths shorter than red, the coupling and propagation losses of photonic integrated circuits increase significantly, which has prevented the realization of high-performance lasers at these colors.

The researchers solved the coupling loss problem by choosing Fabry-Perot (FP) diodes as the light sources, which minimizes the impact of the losses on the performance of the chip-scale lasers. Unlike other strategies that use different types of sources, the team’s approach enables the realization of lasers at record-short wavelengths (404 nm) while also providing scalability to high optical powers, FP laser diodes are inexpensive and compact solid-state lasers widely used in research and industry. However, they emit light of several wavelengths simultaneously and are not easily tunable, preventing them to be directly used for applications requiring pure and precise lasers. By combining them with the specially designed photonic chip, the researchers are able to modify the laser emission to be single-frequency, narrow-linewidth, and widely tunable.

The team overcame the propagation loss issue by designing a platform that minimizes both the material absorption and surface scattering losses simultaneously for all the visible wavelengths. To guide the light, they used silicon nitride, a dielectric widely used in the semiconductor industry that is transparent for visible light of all colors. Even though there is minimal absorption, the light still experiences loss due to unavoidable roughness from the fabrication processes. The team solved this problem by designing a photonic circuit with a special type of ring resonator. The ring has a variable width along its circumference, allowing for single-mode operation characteristic of narrow waveguides, and low loss characteristic of wide waveguides. The resulting photonic circuit provides a wavelength-selective optical feedback to the FP diodes that forces the laser to emit at a single desired wavelength with very narrow linewidth.

“By combining these intricately designed pieces, we were able to build a robust and versatile platform that is scalable and works for all colors of light,” said Corato Zanarella.

“As a laser manufacturer we recognize that integrated photonics will have a tremendous impact on our industry and will enable a new generation of applications that have so far been impossible,” said Chris Haimberger, Director of Laser Technology, TOPTICA Photonics, Inc. “This work represents an important step forward in the pursuit of compact and tunable visible lasers that will power future developments in computing, medicine, and industry.”

The study’s findings could revolutionize a broad range of applications, including:

Quantum information. Most quantum bits for quantum computation use atoms or ions that are trapped and probed using visible light. The light must be very pure (narrow linewidth) and have very specific wavelengths to address atomic transitions. Currently, the lasers available for these applications are expensive and benchtop. This new study shows that these bulky sources can be replaced by tiny and inexpensive chips, which will enable quantum systems to be scaled down and eventually become part of technologies accessible by the general public.Atomic Clocks. The most precise clocks are based on strontium atoms, which need to be trapped and probed by lasers of many different colors at the same time. Similarly to quantum optics systems, the massive size of the currently available lasers confines this technology to research labs. The chip-scale lasers will make it possible to shrink these systems with the goal of making portable atomic clocks. Biosensing. Several neural probes use a technology called optogenetics to measure, modify, and understand the neural response. In this technology, neurons are genetically modified to produce a type of protein called opsin that is sensitive to visible light. By shining visible light, typically blue, into these cells, scientists can turn on specific neurons at will. Similarly, in fluorescent imagining, fluorophores need to be excited with visible light in order to generate the desired images. These high-performance, compact lasers open the doors for miniaturizing these systems. Underwater ranging. Underwater ranging requires blue or green light because ocean water strongly absorbs light of all the other colors. In addition, for the popular ranging strategy called Frequency-Modulated Continuous Wave LiDAR, the laser needs to be speedily tunable for accurate sensing of the distance and velocity of objects. These lasers could be used for portable underwater ranging systems employing this technology.Li-Fi. As the demand for bandwidth in communication systems increases, networks have become saturated. Li-Fi, or visible light communications, is a rapidly growing technology that promises to supplement the traditional microwave links at the user end to overcome this bottleneck. The high modulation speeds of the lasers are ideal for enabling extremely fast optical wireless communication links.

The researchers, who have filed a provisional patent for their technology, are now exploring how to optically and electrically package the lasers to turn them into standalone units and use them as sources in chip-scale visible light engines, quantum experiments, and optical clocks.

“In order to move forward, we have to be able to miniaturize and scale these systems, enabling them to eventually be incorporated in mass-deployed technologies,” said Lipson, a pioneer in silicon photonics whose research has strongly shaped the field from its inception decades ago, with foundational contributions in the active and passive devices that are part of any current photonic chip. She added, “Integrated photonics is an exciting field that is truly revolutionizing our world, from optical telecommunications to quantum information to biosensing.”

The study is titled “Widely tunable and narrow-linewidth chip-scale lasers from near-ultraviolet to near-infrared wavelengths.”

Provided by
Columbia University School of Engineering and Applied Science


Citation:
High-performance visible-light lasers that fit on a fingertip (2023, January 4)