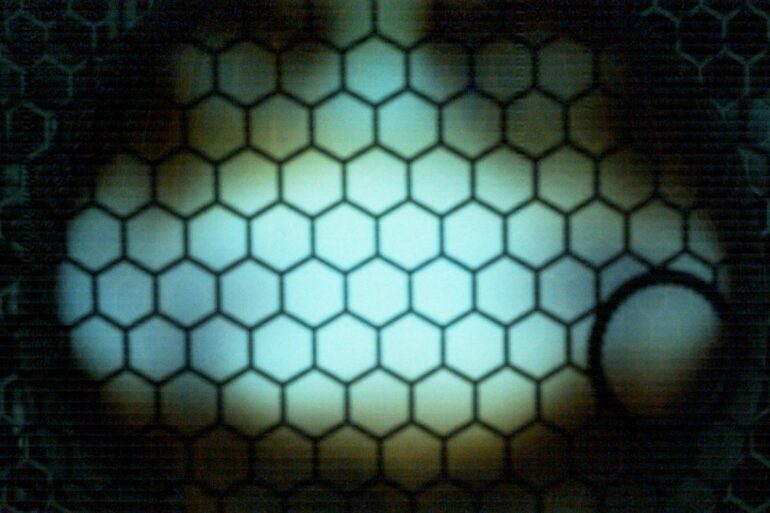 Solar flares and other types of space weather can wreak havoc with spaceflight and with telecommunications and other types of satellites orbiting Earth. But to date, scientists’ ability to research ways to overcome that challenge has been severely limited. That’s because experiments they conduct in laboratories here on Earth are affected by gravity in ways that are quite different from conditions in space.

But a new study by UCLA physicists could at last help conquer that issue—which could be a big step toward safeguarding humans (and equipment) during space expeditions, and toward ensuring the proper functioning of satellites. The paper is published in Physical Review Letters.

The UCLA researchers effectively reproduced the type of gravity that exists on or near stars and other planets inside of a glass sphere measuring 3 centimeters in diameter (about 1.2 inches). To do so, they used sound waves to create a spherical gravitational field and generate plasma convection—a process in which gas cools as it nears the surface of a body and then reheats and rises again as it nears the core—creating a fluid current that in turn generates a magnetic current.

The achievement could help scientists overcome the limiting role of gravity in experiments that are intended to model convection that occurs in stars and other planets.

“People were so interested in trying to model spherical convection with laboratory experiments that they actually put an experiment in the space shuttle because they couldn’t get a strong enough central force field on the ground,” said Seth Putterman, a UCLA physics professor and the study’s senior author. “What we showed is that our system of microwave-generated sound produced gravity so strong that Earth’s gravity wasn’t a factor. We don’t need to go into space to do these experiments anymore.”

UCLA researchers used microwaves to heat sulfur gas to 5,000 degrees Fahrenheit inside the glass sphere. The sound waves inside the ball acted like gravity, constraining movement of the hot, weakly ionized gas, known as plasma, into patterns that resembled the currents of plasma in stars.

“Sound fields act like gravity, at least when it comes to driving convection in gas,” said John Koulakis, a UCLA project scientist and the study’s first author. “With the use of microwave-generated sound in a spherical flask of hot plasma, we achieved a gravity field that is 1,000 times stronger than Earth’s gravity.”

The ability to control and manipulate plasma in ways that mirror solar and planetary convection will help researchers understand and predict how solar weather affects spacecraft and satellite communications systems. Last year, for example, a solar storm knocked out 40 SpaceX satellites. The phenomenon has also been problematic for military technology. The formation of turbulent plasma around hypersonic missiles, for example, can interfere with weapons systems communications.

Putterman and his colleagues are now scaling up the experiment in order to better replicate conditions they’re studying and so that they can observe the phenomenon in more detail and for longer periods of time.