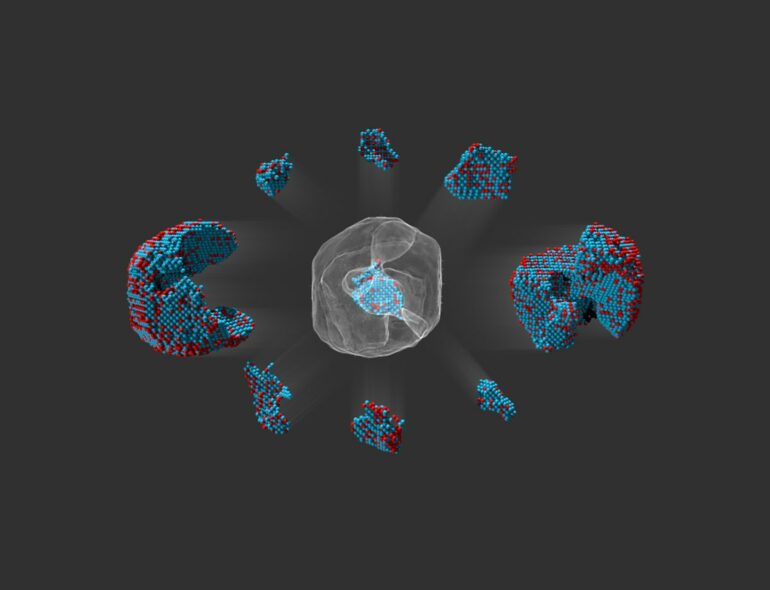 Two new advances from the lab of UO physicist Ben McMorran are refining the microscopes. Both come from taking advantage of a fundamental principle of quantum mechanics: that an electron can behave simultaneously like a wave and a particle. It’s one of many examples of weird, quantum-level quirks in which subatomic particles often behave in ways that seem to violate the laws of classical physics.

One of the studies finds a way to study an object under the microscope without making contact with it, preventing the scope from damaging fragile samples. And the second devises a way to make two measurements on a sample at once, giving a way to study how particles in that object are potentially interacting across distances.

McMorran and his colleagues report their findings in two papers, both published in the journal Physical Review Letters.

“It’s often difficult to observe something without influencing it, especially when you’re looking at details,” McMorran said. “Quantum physics appears to provide a way for us to look at things more without disrupting them.”

Electron microscopes are used to get close-up views of proteins and cells as well as nonbiological samples, like new kinds of materials. Instead of light used in more traditional microscopes, electron microscopes focus a beam of electrons at a sample. As the beam interacts with the sample, some of its characteristics change. A detector measures the changes to the beam, which then get translated into a high-resolution image.

But that powerful electron beam can cause damage to fragile structures in the sample. Over time, it can degrade the very details that scientists are trying to study.

As a workaround, McMorran’s team used a thought experiment published in the early 1990s, which proposed a way to detect a sensitive bomb without touching it and risking setting it off.

With the right alignment of these beam-splitting diffraction gratings, “the electron comes in and gets split into two paths, but then recombines such that it only goes to one of the two possible outputs,” said Amy Turner, a graduate student in McMorran’s lab who led the first study. “The idea is that when you put in a sample, the electron’s interaction with itself is interrupted.”

In this setup, the electrons don’t hit the sample like they do in traditional electron microscopy. Instead, the way the electron beam recombines reveals information about the specimen under the scope.

In another study, McMorran’s team used a similar diffraction grating setup to measure a sample in two places at once. They split an electron beam so that it passed on either side of a small gold particle, measuring the tiny bits of energy that electrons transferred to the particle on each side.

That approach could reveal sensitive atomic-level nuances about a sample, understanding the way that particles are interacting in a sample.

“What’s special about this is you can look at two separate parts of it and then combine them together to see if it’s a collective oscillation or whether they’re uncorrelated,” said Cameron Johnson, a postdoctoral researcher at Lawrence Berkeley National Lab who did his doctoral work in McMorran’s lab and led the study. “We can go beyond limits of the microscope’s energy resolutions and probe interactions that are normally unreachable.”

While the two studies are making different kinds of measurements, they’re using the same basic setup, which is known as interferometry. Members of McMorran’s team think their tool could be useful beyond their own lab, for a variety of different kinds of experiments.

“This is the first electron interferometer of its kind,” Turner said. “People have used diffraction gratings before, but this is a functional, flexible version that can be tuned for different experiments.”

With the right materials and instructions, the setup could be added to many existing electron microscopes, McMorran said. His team has already fielded interest from researchers at other labs who want to use the interferometer in their own microscopes.

“An electron microscope lets us look at stuff on the atomic scale, but a lot of things are hard to see, like biological materials which are both fairly invisible to electrons and easily damaged,” McMorran added. “But here we showed that we can use the quantum wave properties of electrons help to get around those problems, as well as to gain insight into the fundamental nature of how these electron waves interact with electromagnetic fields like light.”