How the universe got its magnetic field 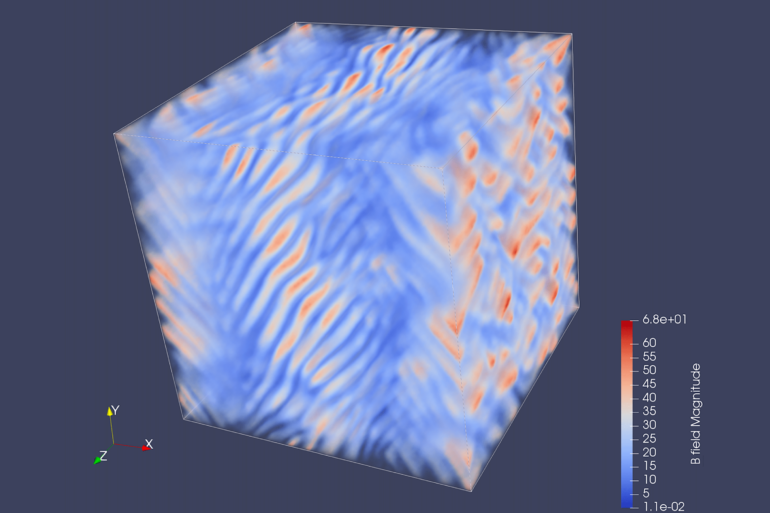 When we look out into space, all of the astrophysical objects that we see are embedded in magnetic fields. This is true not only in the neighborhood of stars and planets, but also in the deep space between galaxies and galactic clusters. These fields are weak—typically much weaker than those of a refrigerator magnet—but they are dynamically significant in the sense that they have profound effects on the dynamics of the universe. Despite decades of intense interest and research, the origin of these cosmic magnetic fields remains one of the most profound mysteries in cosmology.

In previous research, scientists came to understand how turbulence, the churning motion common to fluids of all types, could amplify preexisting magnetic fields through the so-called dynamo process. But this remarkable discovery just pushed the mystery one step deeper. If a turbulent dynamo could only amplify an existing field, where did the “seed” magnetic field come from in the first place?

We wouldn’t have a complete and self-consistent answer to the origin of astrophysical magnetic fields until we understood how the seed fields arose. New work carried out by MIT graduate student Muni Zhou, her advisor Nuno Loureiro, a professor of nuclear science and engineering at MIT, and colleagues at Princeton University and the University of Colorado at Boulder provides an answer that shows the basic processes that generate a field from a completely unmagnetized state to the point where it is strong enough for the dynamo mechanism to take over and amplify the field to the magnitudes that we observe.

Naturally occurring magnetic fields are seen everywhere in the universe. They were first observed on Earth thousands of years ago, through their interaction with magnetized minerals like lodestone, and used for navigation long before people had any understanding of their nature or origin. Magnetism on the sun was discovered at the beginning of the 20th century by its effects on the spectrum of light that the sun emitted. Since then, more powerful telescopes looking deep into space found that the fields were ubiquitous.

And while scientists had long learned how to make and use permanent magnets and electromagnets, which had all sorts of practical applications, the natural origins of magnetic fields in the universe remained a mystery. Recent work has provided part of the answer, but many aspects of this question are still under debate.

Scientists started thinking about this problem by considering the way that electric and magnetic fields were produced in the laboratory. When conductors, like copper wire, move in magnetic fields, electric fields are created. These fields, or voltages, can then drive electrical currents. This is how the electricity that we use every day is produced. Through this process of induction, large generators or “dynamos” convert mechanical energy into the electromagnetic energy that powers our homes and offices. A key feature of dynamos is that they need magnetic fields in order to work.

But out in the universe, there are no obvious wires or big steel structures, so how do the fields arise? Progress on this problem began about a century ago as scientists pondered the source of the Earth’s magnetic field. By then, studies of the propagation of seismic waves showed that much of the Earth, below the cooler surface layers of the mantle, was liquid, and that there was a core composed of molten nickel and iron. Researchers theorized that the convective motion of this hot, electrically conductive liquid and the rotation of the Earth combined in some way to generate the Earth’s field.

Eventually, models emerged that showed how the convective motion could amplify an existing field. This is an example of “self-organization”—a feature often seen in complex dynamical systems—where large-scale structures grow spontaneously from small-scale dynamics. But just like in a power station, you needed a magnetic field to make a magnetic field.

A similar process is at work all over the universe. However, in stars and galaxies and in the space between them, the electrically conducting fluid is not molten metal, but plasma—a state of matter that exists at extremely high temperatures where the electrons are ripped away from their atoms. On Earth, plasmas can be seen in lightning or neon lights. In such a medium, the dynamo effect can amplify an existing magnetic field, provided it starts at some minimal level.

Where does this seed field come from? That’s where the recent work of Zhou and her colleagues, published May 5 in PNAS, comes in. Zhou developed the underlying theory and performed numerical simulations on powerful supercomputers that show how the seed field can be produced and what fundamental processes are at work. An important aspect of the plasma that exists between stars and galaxies is that it is extraordinarily diffuse—typically about one particle per cubic meter. That is a very different situation from the interior of stars, where the particle density is about 30 orders of magnitude higher. The low densities mean that the particles in cosmological plasmas never collide, which has important effects on their behavior that had to be included in the model that these researchers were developing.

Calculations performed by the MIT researchers followed the dynamics in these plasmas, which developed from well-ordered waves but became turbulent as the amplitude grew and the interactions became strongly nonlinear. By including detailed effects of the plasma dynamics at small scales on macroscopic astrophysical processes, they demonstrated that the first magnetic fields can be spontaneously produced through generic large-scale motions as simple as sheared flows. Just like the terrestrial examples, mechanical energy was converted into magnetic energy.

An important output of their computation was the amplitude of the expected spontaneously generated magnetic field. What this showed was that the field amplitude could rise from zero to a level where the plasma is “magnetized”—that is, where the plasma dynamics are strongly affected by the presence of the field. At this point, the traditional dynamo mechanism can take over and raise the fields to the levels that are observed. Thus, their work represents a self-consistent model for the generation of magnetic fields at cosmological scale.

Professor Ellen Zweibel of the University of Wisconsin at Madison notes that “despite decades of remarkable progress in cosmology, the origin of magnetic fields in the universe remains unknown. It is wonderful to see state-of-the-art plasma physics theory and numerical simulation brought to bear on this fundamental problem.”

Zhou and co-workers will continue to refine their model and study the handoff from the generation of the seed field to the amplification phase of the dynamo. An important part of their future research will be to determine if the process can work on a time scale consistent with astronomical observations. To quote the researchers, “This work provides the first step in the building of a new paradigm for understanding magnetogenesis in the universe.”

This story is republished courtesy of MIT News (web.mit.edu/newsoffice/), a popular site that covers news about MIT research, innovation and teaching.