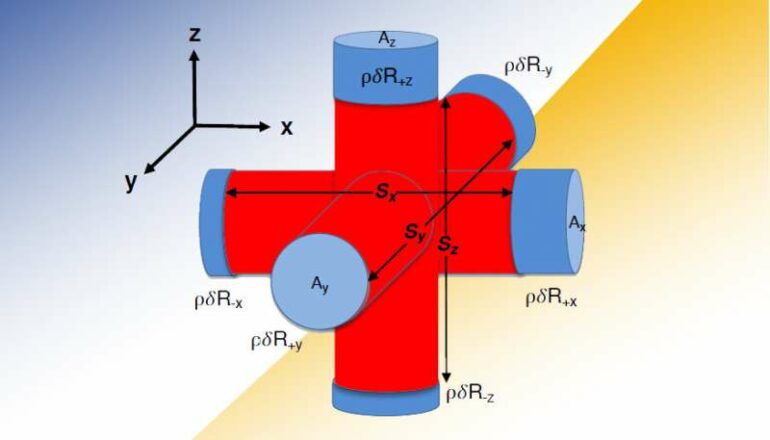 New research conducted at Lawrence Livermore National Laboratory (LLNL) explores the expansion of a classical mechanics model, that has been useful for understanding asymmetries in inertial confinement fusion (ICF) implosions, from a two-piston to a six-piston model to capture higher-mode asymmetries.

The paper also shows that the radius at which the implosion acquires its peak velocity has a very strong impact on fusion performance and it has a direct connection to the concept of “coast time.”

“The bottom line is that we should strive to minimize shell asymmetry at stagnation and minimize the radius of peak velocity in order to maximize ICF fusion performance,” Hurricane said.

“Asymmetry wastes kinetic energy in an implosion—we call this RKE or residual kinetic energy,” Hurricane explained. “The less kinetic energy available to the implosion, the lower the fusion performance. Minimizing asymmetry in our ICF implosions has been a struggle because it integrates asymmetry present in the targets—the capsules in particular, the laser, and the X-ray radiation field in the hohlraum.”

Due to LLNL physicist Dan Casey’s and Hurricane’s insight, an explanation of the work is that of mechanical pistons such as an internal combustion engine doing work on a gas.

“For the engine to work properly, the pistons should be equal thickness. But, for a given set of opposed pistons, if one piston is thick while another piston is thin, the engine won’t compress the fuel-air mixture very well,” Hurricane said.

The initial work done to conduct the research relied on analytical mechanics theory, where researchers looked at 3D implosions that are made up of six pistons doing work on a common hot-spot and converted that into a set of equations that could be solved. The solution gives a testable prediction (and set of equations) which can be compared to ensemble simulations and data. The value of this sort of theory is that it drops out all the overly complicated details that ultimately don’t matter much.

“One of the most valuable results is a simple but powerful set of relationships between asymmetries and the damage they do to implosion performance,” Casey said. “These tools now allow us to estimate how much asymmetry we observe costs us—in other words, we now know how much asymmetry mattered.”

“In inertial confinement fusion, millions of things can potentially be causing us problems, so the value of work like this is to focus our attention on what aspects of implosions are key,” Hurricane said. “It’s building understanding and has the practical result of pointing out what we must fix and it gives us a way to measure how badly asymmetry is hurting our implosions.”

Hurricane said while the researchers originally only intended to study asymmetry in this work, the important connection of radius of peak velocity to the vague concept of coast time was found unexpectedly by following up on some of implications of the mathematical expressions of the work. This gave researchers a much firmer understanding of why coast time appears to matter so much in the Laboratory’s experiments, as has been dramatically shown in a recent experiment that achieved 1.3MJ total yield.

More information:
O. A. Hurricane et al, Extensions of a classical mechanics “piston-model” for understanding the impact of asymmetry on ICF implosions: The cases of mode 2, mode 2/1 coupling, time-dependent asymmetry, and the relationship to coast-time, Physics of Plasmas (2022). DOI: 10.1063/5.0067699