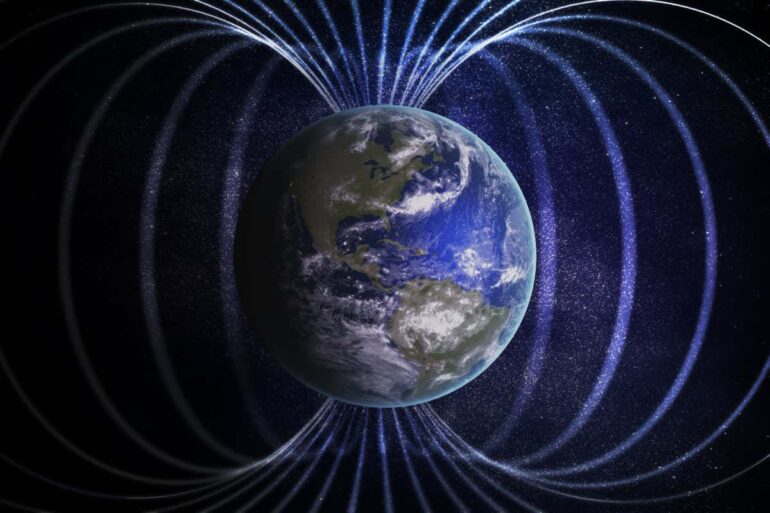 Magnetic reconnections in laser-produced plasmas have been studied to understand microscopic electron dynamics, which is applicable to space and astrophysical phenomena. Osaka University researchers, in collaboration with researchers at the National Institute for Fusion Science and other universities, have reported the direct measurements of pure electron outflows relevant to magnetic reconnection using a high-power laser, Gekko XII, at the Institute of Laser Engineering, Osaka University in Japan. Their findings are published in Scientific Reports.

Magnetic reconnection is a fundamental process in many space and astrophysical phenomena such as solar flares and magnetic substorms, where the magnetic energy is released as plasma energy. It is known that electron dynamics plays essential roles in the triggering mechanism of magnetic reconnection. However, it has been highly challenging to observe the tiny electron scale phenomena in the vast universe.

Thus, the researchers have created situation-only electrons directly coupled with magnetic fields in laser-produced plasmas. The so-called laboratory astrophysics allows one to access the miniature universe.

“In space plasmas, the key players sometimes hide in the small scale. It is very difficult to see their actions in large-scale space phenomena, even via cutting-edge numerical simulations,” study author Toseo Moritaka explains. “Now laser experiments can arrange a new stage to shed light on their actions. The results will bridge various observations and simulations in macroscopic and microscopic points of view.”

By using collective Thomson scattering measurements, the pure electron outflow associated with the electron-scale magnetic reconnection has been measured in laser produced plasmas for the first time.

“The outcomes of this research are applicable not only to space and astrophysical plasmas, but also to magnetic propulsion of spacecrafts and also fusion plasmas,” study lead author Yasuhiro Kuramitsu explains.

“Microscopic electron dynamics governs macroscopic phenomena, such as magnetic reconnections and collisionless shocks. This is a unique and universal property of plasma, which is not seen in ordinary gas and liquid. Now we can address this in laboratories by direct local measurements of the plasma and magnetic field. We will tackle long-standing open problems in the universe by modeling them in laboratories. Knowing the nature of plasmas may lead us to realize, for example, fusion plasma.”