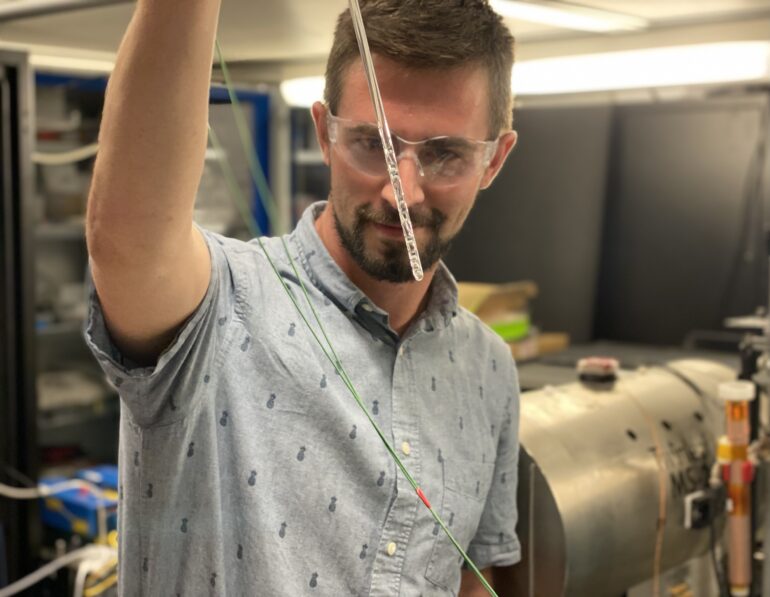 Nuclear magnetic resonance (NMR) is an analytical tool with a wide range of applications, including the magnetic resonance imaging that is used for diagnostic purposes in medicine. However, NMR often requires powerful magnetic fields to be generated, which limits the scope of its use.

Researchers working at Johannes Gutenberg University Mainz (JGU) and the Helmholtz Institute Mainz (HIM) have now discovered potential new ways to reduce the size of the corresponding devices and also the possible associated risk by eliminating the need for strong magnetic fields. This is achieved by combining so-called zero- to ultralow-field NMR with a special hyperpolarization technique. “This exciting new method is based on an innovative concept. It opens up a whole range of opportunities and overcomes previous disadvantages,” said Dr. Danila Barskiy, a Sofja Kovalevskaja Award winner who has been working in the relevant discipline at JGU and HIM since 2020.

The current generation of NMR devices is—because of the magnets—extremely heavy and expensive. Another complicating factor is the present shortage of liquid helium that is employed as a coolant. “With our new technique we are gradually moving ZULF NMR towards a status of being completely magnet-free, but we still have many challenges to overcome,” stated Barskiy.

To make magnets redundant in this context, Barskiy has come up with the idea of combining zero- to ultralow-field nuclear magnetic resonance (ZULF NMR) with a special technique that makes it possible to hyperpolarize atomic nuclei. ZULF NMR is itself a recently developed form of spectroscopy that provides abundant analytical results without the need for large magnetic fields.

Another advantage over high-field NMR is the fact that its signals can also be readily detected in the presence of conductive materials, such as metals. The sensors employed for ZULF NMR, typically optically pumped magnetometers, are highly sensitive, easy to use, and they are already commercially available. Thus it is relatively straightforward to assemble a ZULF NMR spectrometer.

However, the generated NMR signal is an issue to be dealt with. The methods that have been used to date to generate the signal are suitable only for the analysis of a limited selection of chemicals or are otherwise associated with exorbitant costs. For this reason, Barskiy has decided to exploit the hyperpolarization technique SABRE which allows aligning nuclear spins at large numbers in solution.

There are a number of such techniques that would produce a signal sufficient for detection in ZULF conditions. Among these is SABRE, short for Signal Amplification by Reversible Exchange, which has proved to be particularly well suited. Central to the SABRE technique is an iridium metal complex that mediates the transfer of the spin order from parahydrogen to a substrate.

Barskiy has managed to sidestep the disadvantages resulting from the temporary binding of the sample to the complex by employing SABRE-Relay, a very recent improvement of the SABRE technique. In this case, SABRE is used to induce polarization which is then relayed to a secondary substrate.

Spin chemistry at the interface of physics and chemistry

In their paper titled “Relayed Hyperpolarization for Zero-Field Nuclear Magnetic Resonance” published in Science Advances, Dr. Danila Barskiy, lead author Erik Van Dyke, and their co-authors report on how they were able to detect the signals for methanol and ethanol extracted from a sample of vodka.

The dark side of the universe: How black holes became supermassive

“This simple example demonstrates how we have been able to extend the application range of ZULF NMR with the help of an inexpensive, rapid, and versatile method of hyperpolarization,” summarized Barskiy. “We hope that we’ve managed to get a little closer to our objective of making feasible the development of compact, portable devices that can be used for the analysis of liquids such as blood and urine and in future, possibly endowing discrimination of particular chemicals such as glucose and amino acids.”