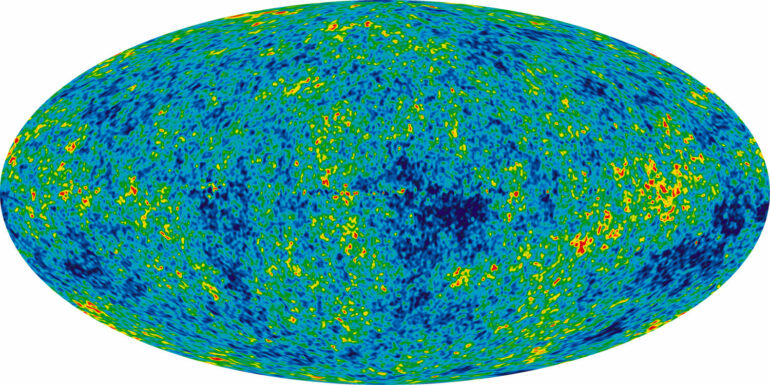 By confirming certain light-scattering dynamics first proposed a half-century ago, University of Nebraska–Lincoln physicists are casting fresh eyes on the universe-birthing fireworks ignited by the Big Bang nearly 14 billion years ago.

With help from the ultra-intense lasers at Nebraska’s Extreme Light Laboratory and the ingenuity of colleagues at Brigham Young University, Husker researchers have experimentally demonstrated just how strangely light can behave when scattering from electrons.

In characterizing that behavior, they might also give cosmologists cause to reconsider aspects of the so-called cosmic microwave background: electromagnetic radiation, generated during the Big Bang, that carries hints about the origins of the universe while continuing to hurtle through it.

“Our results are a prime example of that universality of scientific research,” said Donald Umstadter, the Leland J. and Dorothy H. Olson Professor of physics at Nebraska. “An experiment performed in the laboratory today can shed light on the understanding of phenomena that took place out in the cosmos billions of years earlier.”

The researchers directed their attention and their lasers at a fundamental phenomenon known as Thomson scattering, which begins when a packet of light, or photon, strikes a free electron. In the lower-intensity, linear version of Thomson scattering, the electron effectively scatters light at the same frequency that the light approached. Under that scenario, red light approaching an electron will likewise scatter from it as red light.

But Umstadter, Colton Fruhling and company were more interested in nonlinear Thomson scattering—a higher-intensity, multi-photon version in which light exits at a higher energy and frequency than it entered. Rather than scattering as the same color, red light might instead scatter as yellow, green and blue or as an invisible frequency on the electromagnetic spectrum.

Both of those cases, and their outcomes, were previously demonstrated in the laboratory. Much trickier, and never before measured in nonlinear Thomson scattering, is elliptical polarization—similar to circular, except that the magnitude of the electric field fluctuates with every 90 degrees of rotation, so that its edge traces the shape of an ellipse, not a circle.

That “in-between” polarization, though included as part of a longstanding theoretical framework on Thomson scattering, became the focus of experiments at the Extreme Light Lab.

“Most of this theory is 50 years old,” said Fruhling, who led the research as a doctoral candidate at Nebraska before graduating and taking a postdoctoral appointment at Purdue University. “But just because it’s in a textbook doesn’t mean it’s set in stone. Lots of things in textbooks are wrong.”

First, the Extreme Light Lab had to meet the challenge of modifying a standard experimental setup so that it could accommodate the elliptically polarized laser pulses the team wanted to fire at electrons. Meanwhile, BYU’s Justin Peatross, Michael Ware and colleagues were busy building an instrument that could detect just a single photon at a time. The latter was crucial, Fruhling said, to eliminate the confounding influences of other variables.

“We wanted to see only the Thomson scattered light, which is challenging, because the probability of Thomson scattering is actually very small when compared to other light generated from the intense laser,” Fruhling said. “Scattering photons from electrons is like colliding two bullets with each other, but they’re very, very small bullets. And you’re blindfolded when you’re doing it, so you just kind of randomly shoot, and there’s only a chance of hitting.”

When the blindfold came off, the researchers found plenty to sift through. They confirmed, for one, that the electrons struck by high-intensity pulses adopt a back-and-forth trajectory parallel to the light that hits them—a quirk observed only in nonlinear Thomson scattering.

The unique electron trajectory triggered by elliptically polarized, high-intensity light also helps account for an observed radiation pattern that aligned with simulations the team ran prior to the experiments. That radiation pattern resembles a bold, rounded X—essentially halfway between a four-petal flower pattern yielded by linear polarization and the rounded square that emerges as elliptical polarization becomes circular.

According to some equations Fruhling derived from existing theory, the uniqueness of the electron trajectory likewise helps explain the “very weird electric field” that manifests when an electron is struck by elliptically polarized light of sufficient intensity.

“It dances around and squiggles,” Fruhling said of the electric field.

The distinctiveness of that electric field, in particular, could possibly have implications far grander than Fruhling imagined at the time.

“I didn’t realize the application with the cosmic microwave background until Don sent me a paper,” Fruhling said.

The paper laid out calculations that cosmologists rely on to analyze and derive insights from the cosmic microwave background. Central to some of those calculations: the radiation’s polarization. Much of that polarization would have been established by collisions with electrons or other charged particles less than 400,000 years after the Big Bang—and remains preserved in the radiation almost 14 billion years later.

Determining when a material becomes ‘glassy’

As Umstadter came to learn, though, the calculations of cosmologists generally assume that post-Big Bang scattering was linear in nature. That assumption, he said, could potentially lead cosmologists astray when analyzing the polarization signatures of the universe’s earliest radiation.

“Our results need to be considered in the interpretation of recent measurements of the cosmic microwave background’s polarization state—which are used to test cosmological theories—because they indicate that even a mild nonlinearity can substantially alter the polarization of the scattered radiation,” Umstadter said.

“So you might interpret the data incorrectly,” Fruhling said. “It seems reasonable to me that maybe you should include the nonlinear part in those calculations, which, to my knowledge, is currently not done.”

Fruhling doesn’t claim to know how much of a difference that inclusion might or might not make. But even if their implications turn out more modest than mutinous, the discoveries illustrate an important reality of exploratory science, he said.

“In science, oftentimes, you just look for something interesting, and then the motivation comes after: How does this affect other results?”