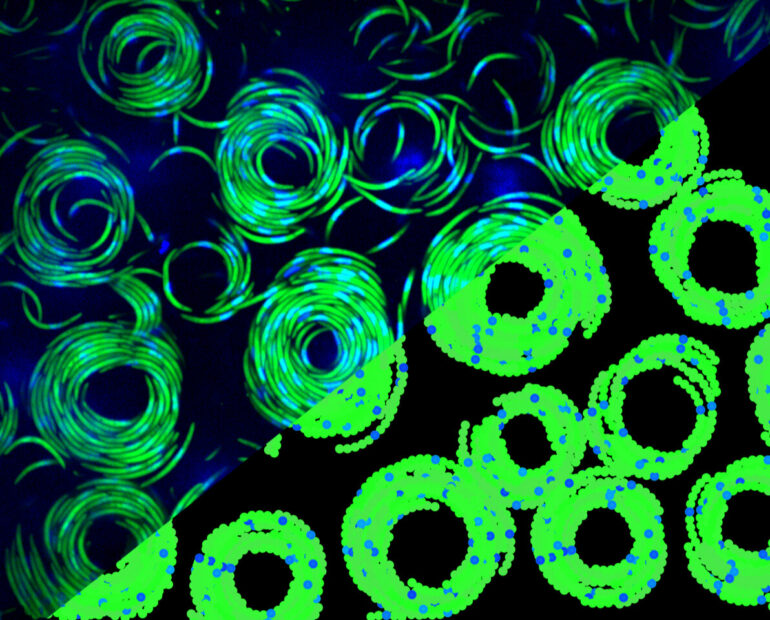 The disease of malaria is triggered by single-celled parasites that accumulate in large groups in the salivary glands of mosquitoes before transmission to human beings. The limited space there prevents them from actually moving, unless this restriction is lifted by means of appropriate experimental preparation. In just such a set of experiments, researchers at Heidelberg University have set the pathogens in motion and analyzed the acquired image data using cutting-edge methods of image processing. The data show that the collectively moving pathogens form vortex systems that are largely determined by physical principles. Special computer simulations helped identify the mechanisms underlying these rotating movements.

The collective movement of biological organisms is a common phenomenon in the natural world. Insects and fish, for instance, tend to move in swarms. Often, collective movement also occurs at the cellular level, such as when cancer cells migrate from a tumor or bacteria form a biofilm. The collaboration of many individuals can give rise to so-called emergent behavior—new characteristics that would not otherwise exist in this form.

“In physics, collectivity creates such important processes as phase transitions, superconductivity, and magnetic properties,” explains Prof. Dr. Ulrich Schwarz, head of the Physics of Complex Biosystems working group at the Institute for Theoretical Physics of Heidelberg University. In an interdisciplinary study together with Prof. Dr. Friedrich Frischknecht (malaria research) and Prof. Dr. Karl Rohr (biomedical image analysis), he has shown that collective movement can also occur in Plasmodium, the causative agent of malaria.

The single-celled organism is injected into the skin through a mosquito bite, developing first in the liver and then later in the blood. Because Plasmodium acts as a single cell in most of its stages, until now its collective properties were hardly studied. In the salivary gland of the mosquito, the parasite has a long and curved shape, similar to a crescent moon, and is known as a sporozoite. “As soon as sporozoites are injected into the skin by the mosquito, individual parasites begin to quickly move toward the blood vessels. This is the critical phase of the infection, because it is successful only if a pathogen reaches the blood stream,” says Prof. Frischknecht.

In their studies at the Center for Infectious Diseases of Heidelberg University Hospital, Friedrich Frischknecht and his team discovered that the parasites in infected salivary glands can be mobilized as a collective. To do so, the salivary glands are dissected from the mosquito and carefully pressed between two small glass plates. The researchers were surprised to discover that the crescent moon-shaped cells form rotating vortices in the new preparation. They are reminiscent of the collective movements of bacteria or fish, although they differ in that they always rotate in the same direction. The parasite vortices therefore have a chiral character and—likewise unexpectedly—fluctuate in size. According to Prof. Frischknecht, these oscillations point to emergent characteristics, since they are possible only in the collective of the moving cells and grow stronger in larger vortices.

To understand these phenomena more precisely, the experimental data were analyzed quantitatively. The groups of Ulrich Schwarz and Karl Rohr, head of the Biomedical Computer Vision Group at BioQuant Center of Heidelberg University, used cutting-edge methods of image processing for this purpose. They were able to track individual parasites in the rotating vortices and measure both their speed and curvature.

Using so-called agent-based computer simulations, it was possible to precisely identify those laws that can explain all aspects of the experimental observations. The interplay of active movement, curved shape of the cell, and chirality in conjunction with mechanical flexibility is sufficient to explain the sorting and oscillation phenomena in the parasite vortices. The oscillations the scientists observed arise because the movement of the individual pathogens is converted into elastic energy that is stored in the vortex. “Our new model system offers the opportunity to better understand the physics of collectives with elastic properties and perhaps render them usable for technical applications in the future,” states the physicist Ulrich Schwarz.

In the next step, the researchers will investigate exactly how the chirality of movement comes about. The structure of sporozoites suggests different possibilities that can be studied in experiments with genetic mutations. Initial computer simulations have already shown that the right- and left-turning parasites quickly segregate and generate separate vortex systems. A better understanding of the underlying molecular mechanisms could open up new avenues to disrupt sporozoite movement at the onset of every malaria infection. “In any event, our study has shown that the mechanics of the pathogens play an extremely important and heretofore overlooked role—a finding that also opens up new perspectives for medical interventions,” says Frischknecht.

The research work was conducted in the framework of the Collaborative Research Center 1129, “Integrative Analysis of Pathogen Replication and Spread,” based at the Medical Faculty Heidelberg of Heidelberg University. The results of the interdisciplinary study were published in the journal Nature Physics.