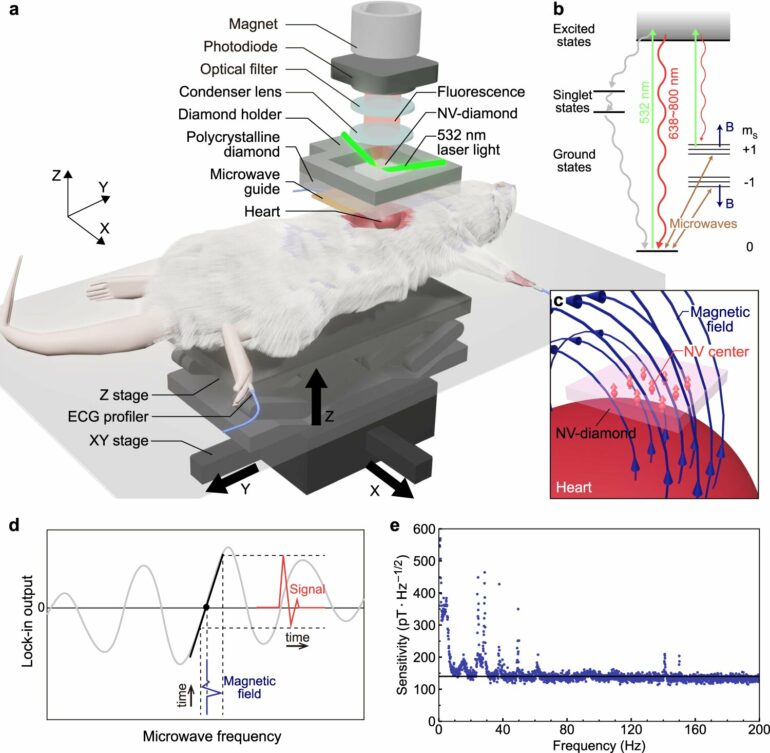 Heart problems, such as tachycardia and fibrillation, arise mainly from imperfections in the way electric currents propagate through the heart. Unfortunately, it is difficult for doctors to study these imperfections since measuring these currents involves highly invasive procedures and exposure to X-ray radiation.

However, there are other options. For instance, magnetocardiography (MCG) is a promising alternative approach to indirectly measure heart currents. The technique involves sensing minute changes in magnetic field near the heart caused by cardiac currents, which can be done in a completely contactless manner. To this end, various types of quantum sensors suitable for this purpose have been developed. However, their spatial resolution is limited to centimeter scales: not good enough to detect cardiac currents that propagate at millimeter scales. Moreover, each of these sensors has a fair share of its practical limitations, such as size and operating temperature.

In a recent study published in Communications Physics, a team of scientists led by Associate Professor Takayuki Iwasaki of Tokyo Institute of Technology (Tokyo Tech), Japan, have now developed a novel setup to perform MCG at higher resolutions. Their approach is based on a diamond quantum sensor comprising nitrogen vacancies, which act as special magnetic “centers” that are sensitive to the weak magnetic fields produced by heart currents.

But how does one observe the state of these centers to extract information about the cardiac currents? It turns out that the sensor is also fluorescent, which means that it easily absorbs light at specific frequencies and then re-emits them at different frequencies. Most importantly, the intensity of the light re-emitted at the nitrogen vacancies changes depending on the intensity and direction of the external magnetic field.

The research team created an MCG setup using a 532 nm (green) laser to excite the diamond sensor and a photodiode to capture the re-emitted photons (light particles). They also developed mathematical models to accurately map these captured photons with the corresponding magnetic fields and, in turn, with the cardiac currents responsible for them.

With an unprecedented spatial resolution of 5.1 mm, the proposed system could create detailed two-dimensional maps of the cardiac currents measured in the hearts of laboratory rats. Additionally, the diamond sensor could operate at room temperature, unlike other well-established MCG sensors that require cryogenic temperatures. This enabled the researchers to position their sensor extremely close to the heart tissue, which amplified the measured signals. “The advantages of our contactless sensor combined with our current models will allow for more precise observations of cardiac imperfections using small mammalian model animals,” highlights Dr. Iwasaki.

Overall, the MCG setup developed in this study appears to be a promising tool for understanding many heart problems as well as other bodily processes involving electric currents. In this regard, Dr. Iwasaki remarks: “Our technique will enable the study of the origin and progression of various cardiac arrhythmias, as well as other biological current-driven phenomena.”


Citation:
Measuring currents in the heart at millimeter resolution with a diamond quantum sensor (2022, August 23)