Measuring Einstein’s photoelectric effect: The time it takes for an electron to be released 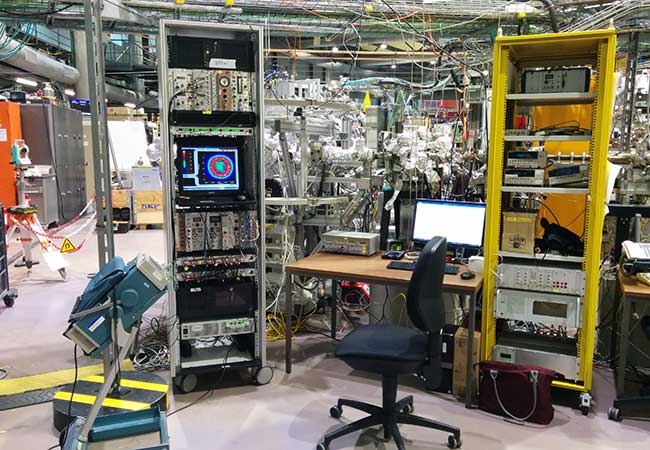 When light hits a material, electrons can be released from this material—the photoelectric effect. Although this effect played a major role in the development of the quantum theory, it still holds a number of secrets: To date it has not been clear how quickly the electron is released after the photon is absorbed. Jonas Rist, a Ph.D. student working within an international team of researchers at the Institute for Nuclear Physics at Goethe University Frankfurt, has now been able to find an answer to this mystery with the aid of a COLTRIMS reaction microscope which had been developed in Frankfurt: The emission takes place lightning fast, namely within just a few attoseconds—within a billionth of billionths of a second.

Exactly 100 years ago, Albert Einstein was awarded the Nobel Prize in Physics for his work on the photoelectric effect. The jury had not yet really understood his revolutionary theory of relativity—but Einstein had also conducted ground-breaking work on the photoelectric effect. With his analysis he was able to demonstrate that light comprises individual packets of energy—so-called photons. This was the decisive confirmation of Max Planck’s hypothesis that light is made up of quanta, and paved the way for the modern quantum theory.

Although the photoelectric effect in molecules has been studied extensively in the meantime, it has not yet been possible to determine its evolution over time in an experimental measurement. How long does it take after a light quantum has hit a molecule for an electron to be dislodged in a specific direction?

“The length of time between photon absorption and electron emission is very difficult to measure because it is only a matter of attoseconds,” explains Till Jahnke, the Ph.D. supervisor of Jonas Rist. This corresponds to just a few light oscillations. “It has so far been impossible to measure this duration directly, which is why we have now determined it indirectly.” To this end, the scientists used a COLTRIMS reaction microscope—a measuring device with which individual atoms and molecules can be studied in incredible detail.

The researchers fired extremely intense X-ray light—generated by the synchrotron radiation source BESSY II of Helmholtz-Zentrum Berlin—at a sample of carbon monoxide in the center of the reaction microscope. The carbon monoxide molecule consists of one oxygen atom and one carbon atom. The X-ray beam now had exactly the right amount of energy to dislodge one of the electrons from the innermost electron shell of the carbon atom. As a result, the molecule fragments. The oxygen and carbon atoms as well as the released electron were then measured.

“And this is where quantum physics comes into play,” explains Rist. “The emission of the electrons does not take place symmetrically in all directions.” As carbon monoxide molecules have an outstanding axis, the emitted electrons, as long as they are still in the immediate vicinity of the molecule, are still affected by its electrostatic fields. This delays the release slightly—and to differing extents depending upon the direction in which the electrons are ejected.

As, in accordance with the laws of quantum physics, electrons not only have a particle character but also a wave character, which in the end manifests in form of an interference pattern on the detector. “On the basis of these interference effects, which we were able to measure with the reaction microscope, the duration of the delay could be determined indirectly with very high accuracy, even if the time interval is incredibly short,” says Rist. “To do this, however, we had to avail of several of the possible tricks offered by quantum physics.”

These measurements are not only interesting for fundamental research in the field of physics. The models which are used to describe this type of electron dynamics are also relevant for many chemical processes in which electrons are not released entirely, but are transferred to neighboring molecules, for instance, and trigger further reactions there. “In the future, such experiments could also help to better understand chemical reaction dynamics,” says Jahnke.


Citation:
Measuring Einstein’s photoelectric effect: The time it takes for an electron to be released (2022, February 10)