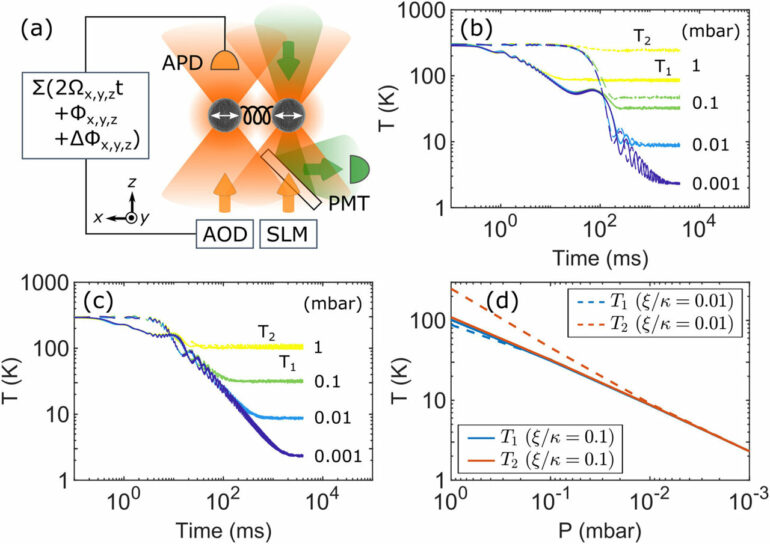 A team of international researchers, including scientists from the University of St Andrews, has created a micro-refrigerator the size of a blood cell to cool adjacent objects, which could have major applications in quantum technologies.

This research, published in the journal Optica, could help address the long-standing open question in physics—why mysterious quantum effects that govern the behavior of atoms and molecules are not seen on an everyday scale.

Quantum mechanics describes the behavior of exceptionally small objects at very low temperatures. Among the remarkable effects of quantum mechanics is quantum entanglement.

Referred to by Einstein as “spooky action at a distance,” this effect couples the destiny of separated objects: performing a measurement of one object instantaneously tells you the result of the same measurement on the other object, even if it is exceptionally far away. This is behind the current drive to realize quantum computers and quantum-based encryption.

To see entanglement between two objects, they first need to be in the quantum regime. This means they need to be incredibly cold—and the bigger the object, the colder it must be. For this reason, entanglement has only ever been demonstrated with exceptionally small and cold objects, such as small clouds of atoms or molecules. Entanglement of everyday objects remains in the realm of science fiction.

However, in an important step towards this goal, an international team of researchers from Scotland, Australia, U.S. and the Czech Republic have now developed a way to allow two or more glass beads, each the size of a red blood cell, to be cooled to temperatures colder than the depths of outer space.

For objects this size, the speed of their motion is related to their temperature, so slowing an object down is effectively cooling it. The team used lasers to cool one of the beads, which then acted as a refrigerator for an additional bead. They achieved this by using light scattering between the beads to couple their motion. Reducing the temperature of the laser-cooled refrigerator cooled the other beads to less than one degree above absolute zero—the coldest temperature achievable in the universe and almost 300 degrees cooler than a warm day.

Dr. Yoshihiko Arita, research fellow in the University’s School of Physics and Astronomy and the first author of the study, said, “This experiment shows a new path by which we may cool two or more objects. It is exciting that the approach is compatible with many current experiments in the field and it offers a potential route to seeing entanglement in objects that are at the edge of what we can see with the naked eye.”

Professor Kishan Dholakia from the School of Physics and Astronomy and the University of Adelaide, who supervised the research, said, “Levitated particles are poised to offer a paradigm shift for terrestrial sensing of fundamental forces and quantum physics. They could even lead to table-top sensors of gravitational waves. This work will inspire researchers to explore the merit of multiple particles for a range of studies in this burgeoning area.”