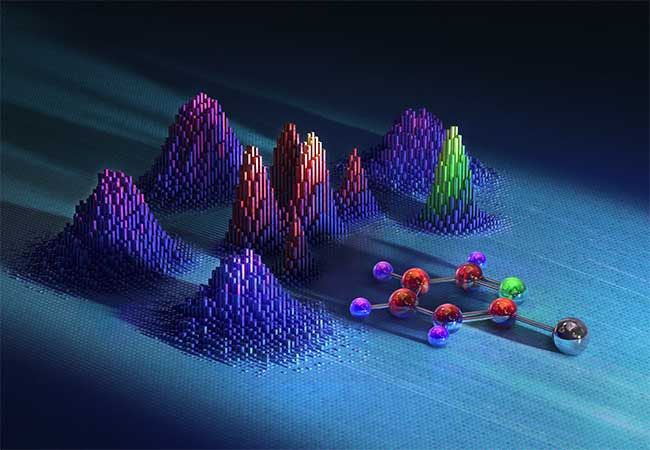 Exploding a photo subject in order to take its picture? An international research team at the European XFEL, the world’s largest X-ray laser, applied this “extreme” method to take pictures of complex molecules. The scientists used the ultra-bright X-ray flashes generated by the facility to take snapshots of gas-phase iodopyridine molecules at atomic resolution. The X-ray laser caused the molecules to explode, and the image was reconstructed from the pieces. “Thanks to the European XFEL’s extremely intense and particularly short X-ray pulses, we were able to produce an image of unprecedented clarity for this method and the size of the molecule,” reports Rebecca Boll from the European XFEL, principal investigator of the experiment and one of the two first authors of the publication in the scientific journal Nature Physics in which the team describes their results. Such clear images of complex molecules have not been possible using this experimental technique until now.

The images are an important step towards recording molecular movies, which researchers hope to use in the future to observe details of biochemical and chemical reactions or physical changes at high resolution. Such films are expected to stimulate developments in various fields of research. “The method we use is particularly promising for investigating photochemical processes,” explains Till Jahnke from the European XFEL and the Goethe University Frankfurt, who is a member of the core team conducting the study. Such processes in which chemical reactions are triggered by light are of great importance both in the laboratory and in nature, for example in photosynthesis and in visual processes in the eye. “The development of molecular movies is fundamental research,” Jahnke explains, hoping that “the knowledge gained from them could help us to better understand such processes in the future and develop new ideas for medicine, sustainable energy production and materials research.”

In the method known as Coulomb explosion imaging, a high-intensity and ultra-short X-ray laser pulse knocks a large number of electrons out of the molecule. Due to the strong electrostatic repulsion between the remaining, positively charged atoms, the molecule explodes within a few femtoseconds—a millionth of a billionth of a second. The individual ionized fragments then fly apart and are registered by a detector.

“Up to now, Coulomb explosion imaging was limited to small molecules consisting of no more than five atoms,” explains Julia Schäfer from the Center for Free-Electron Laser Science (CFEL) at DESY, the other first author of the study. “With our work, we have broken this limit for this method.” Iodopyridine (C5H4IN) consists of eleven atoms.

The film studio for the explosive molecule images is the SQS (Small Quantum Systems) instrument at the European XFEL. A COLTRIMS reaction microscope (REMI) developed especially for these types of investigations applies electric fields to direct the charged fragments onto a detector. The location and time of impact of the fragments are determined and then used to reconstruct their momentum—the product of mass and velocity—with which the ions hit the detector. “This information can be used to obtain details about the molecule, and with the help of models, we can reconstruct the course of reactions and processes involved,” says DESY researcher Robin Santra, who led the theoretical part of the work.

Coulomb explosion imaging is particularly suitable for tracking very light atoms such as hydrogen in chemical reactions. The technique enables detailed investigations of individual molecules in the gas phase, and is therefore a complementary method for producing molecular movies, alongside those being developed for liquids and solids at other European XFEL instruments.

“We want to understand fundamental photochemical processes in detail. In the gas phase, there is no interference from other molecules or the environment. We can therefore use our technique to study individual, isolated molecules,” says Jahnke. Boll adds that they “are working on investigating molecular dynamics as the next step, so that individual images can be combined into a real molecular movie, and have already conducted the first of these experiments.”