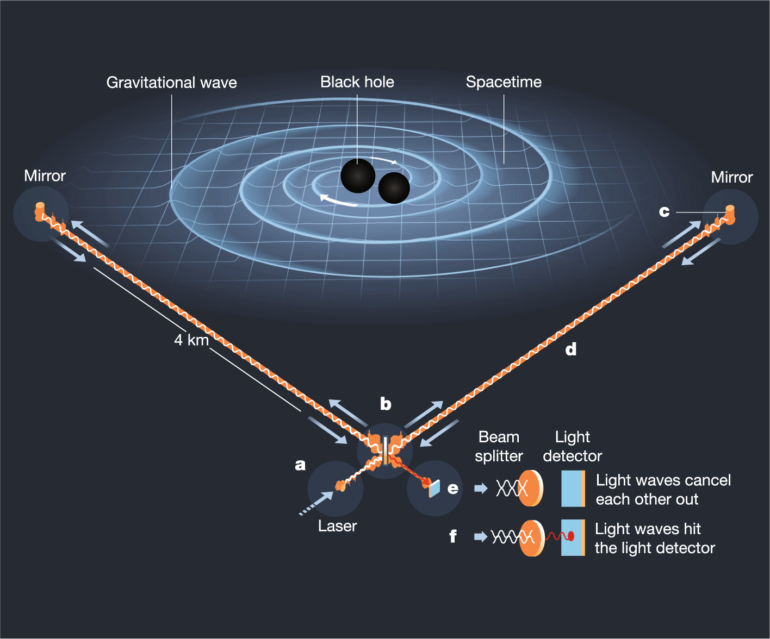 Researchers from the UAB, IFAE and University College London propose using the variations in distance between the Earth and the moon, which can be measured with a precision of less than a centimeter, as a new gravitational wave detector within a frequency range that current devices cannot detect. The research, which could pave the way for the detection of signals from the early universe, was published recently in Physical Review Letters.

Gravitational waves, predicted by Albert Einstein at the start of the 20th century and detected for the first time in 2015, are the new messengers of the most violent processes taking place in the universe. The gravitational wave detectors scan different frequency ranges, similar to moving a dial when tuning into a radio station. Nevertheless, there are frequencies that are impossible to cover with current devices and which may harbor signals that are fundamental to understanding the cosmos. One particular example can be seen in microhertz waves, which could have been produced at the dawn of our universe, and are practically invisible to even the most advanced technology available today.

In an article recently published in the journal Physical Review Letters, researchers Diego Blas from the Department of Physics at the Universitat Autònoma de Barcelona (UAB) and the Institut de Física d’Altes Energies (IFAE), and Alexander Jenkins from the University College London (UCL), point out that a natural gravitational wave detector exists in our immediate environment: the Earth-moon system. The gravitational waves constantly hitting this system generate tiny deviations in the moon’s orbit. Although these deviations are minute, Blas and Jenkins plan on taking advantage of the fact that the moon’s exact position is known with an error of at most one centimeter, thanks to the use of lasers sent from different observatories which are continuously reflected upon mirrors left on the surface of the moon by the Apollo space mission and others. This incredible precision, with an error of one billionth of a part at most, is what may allow a small disturbance caused by ancient gravitational waves to be detected. The moon’s orbit lasts approximately 28 days, which translates into a particularly relevant sensitivity when it comes to microhertz, the frequency range researchers are interested in.

Similarly, they also propose using the information other binary systems in the universe may provide as gravitational wave detectors. This is the case of pulsar binary systems distributed throughout the galaxy, systems in which the pulsar’s radiation beam allows obtaining the orbit of these stars with incredible precision (with a precision of one millionth). Given that these orbits last approximately 20 days, the passing of gravitational waves in the microhertz frequency range affect them particularly. Blas and Jenkins concluded that these systems could also be potential detectors of these types of gravitational waves.

With these “natural detectors” in the microhertz frequency range, Blas and Jenkins were able to propose a new form of studying gravitational waves emitted by the distant universe. Specifically, those produced by the possible presence of transitions in highly energetic phases of the early universe, commonly seen in many models.

“What is most interesting perhaps is that this method complements future ESA/NASA missions, such as LISA, and observatories participating in the Square Kilometer Array (SKA) project, to reach an almost total coverage of the gravitational waves from the nanohertz (SKA) to the centihertz (LIGO/VIRGO) frequency ranges. This coverage is vital to obtaining a precise image of the evolution of the universe, as well as its composition,” Diego Blas explains. “Covering the microhertz frequency range is a challenge, which now may be feasible without the need of building new detectors, and only observing the orbits of systems we already know. This connection between fundamental aspects of the universe and more mundane objects is particularly fascinating and can eventually lead to the detection of the earliest signals we have ever seen, and thus change what we know about the cosmos,” he concludes.

Algorithm to increase the efficiency of quantum computers