New laboratory to explore the quantum mysteries of nuclear materials 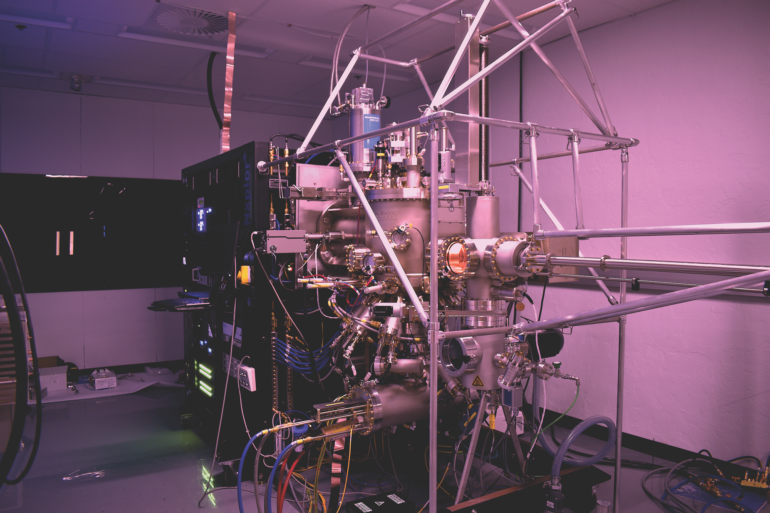 Every day, researchers discover new details about the laws that govern the tiniest building blocks of the universe. These details not only increase scientific understanding of quantum physics, but they also hold the potential to unlock a host of technologies, from quantum computers to lasers to next-generation solar cells.

But there’s one area that remains a mystery even in this most mysterious of sciences: the quantum mechanics of nuclear fuels.

Exploring the frontiers of quantum mechanics

Until now, most fundamental scientific research of quantum mechanics has focused on elements such as silicon because these materials are relatively inexpensive, easy to obtain and easy to work with.

Now, Idaho National Laboratory researchers are planning to explore the frontiers of quantum mechanics with a new synthesis laboratory that can work with radioactive elements such as uranium and thorium.

An announcement about the new laboratory appears online in the journal Nature Communications.

Uranium and thorium, which are part of a larger group of elements called actinides, are used as fuels in nuclear power reactors because they can undergo nuclear fission under certain conditions.

However, the unique properties of these elements, especially the arrangement of their electrons, also means they could exhibit interesting quantum mechanical properties. In particular, the behavior of particles in special, extremely thin materials made from actinides could increase our understanding of phenomena such as quantum wells and quantum tunneling.

To study these properties, a team of researchers has built a laboratory around molecular beam epitaxy (MBE), a process that creates ultra-thin layers of materials with a high degree of purity and control.

“The MBE technique itself is not new,” said Krzysztof Gofryk, a scientist at INL. “It’s widely used. What’s new is that we’re applying this method to actinide materials—uranium and thorium. Right now, this capability doesn’t exist anywhere else in the world that we know of.”

The INL team is conducting fundamental research—science for the sake of knowledge—but the practical applications of these materials could make for some important technological breakthroughs.

“At this point, we are not interested in building a new qubit [the basis of quantum computing], but we are thinking about which materials might be useful for that,” Gofryk said. “Some of these materials could be potentially interesting for new memory banks and spin-based transistors, for instance.”

Memory banks and transistors are both important components of computers.

To understand how researchers make these very thin materials, imagine an empty ball pit at a fast-food restaurant. Blue and red balls are thrown in the pit one at a time until they make a single layer on the floor. But that layer isn’t a random assortment of balls. Instead, they arrange themselves into a pattern.

During the MBE process, the empty ball pit is a vacuum chamber, and the balls are highly pure elements, such as nitrogen and uranium, that are heated until individual atoms can escape into the chamber.

The floor of our imaginary ball pit is, in reality, a charged substrate that attracts the individual atoms. On the substrate, atoms order themselves to create a wafer of very thin material—in this case, uranium nitride.

Back in the ball pit, we’ve created layer of blue and red balls arranged in a pattern. Now we make another layer of green and orange balls on top of the first layer.

To study the quantum properties of these materials, Gofryk and his team will join two dissimilar wafers of material into a sandwich called a heterostructure. For instance, the thin layer of uranium nitride might be joined to a thin layer of another material such as gallium arsenide, a semiconductor. At the junction between the two different materials, interesting quantum mechanical properties can be observed.

“We can make sandwiches of these materials from a variety of elements,” Gofryk said. “We have lots of flexibility. We are trying to think about the novel structures we can create with maybe some predicted quantum properties.”

“We want to look at electronic properties, structural properties, thermal properties and how electrons are transported through the layers,” he continued. “What will happen if you lower the temperature and apply a magnetic field? Will it cause electrons to behave in certain way?”

INL is one of the few places where researchers can work with uranium and thorium for this type of science. The amounts of the radioactive materials—and the consequent safety concerns—will be comparable to the radioactivity found in an everyday smoke alarm.

“INL is the perfect place for this research because we’re interested in this kind of physics and chemistry,” Gofryk said.

In the end, Gofryk hopes the laboratory will result in breakthroughs that help attract attention from potential collaborators as well as recruit new employees to the laboratory.

“These actinides have such special properties,” he said. “We’re hoping we can discover some new phenomena or new physics that hasn’t been found before.”

Sidebar: What is quantum mechanics?

In 1900, German physicist Max Planck first described how light emitted from heated objects, such as the filament in a light bulb, behaved like particles.

Since then, numerous scientists—including Albert Einstein and Niels Bohr—have explored and expanded upon Planck’s discovery to develop the field of physics known as quantum mechanics. In short, quantum mechanics describes the behavior of atoms and subatomic particles.

Quantum mechanics is different than regular physics, in part, because subatomic particles simultaneously have characteristics of both particles and waves, and their energy and movement occur in discrete amounts called “quanta.”

More than 120 years later, quantum mechanics plays a key role in numerous practical applications, especially lasers and transistors—a key component of modern electronic devices. Quantum mechanics also promises to serve as the basis for the next generation of computers, known as quantum computers, which will be much more powerful at solving certain types of calculations.

Why uranium and thorium are different

Uranium, thorium and the other actinides have something in common that makes them interesting for quantum mechanics: the arrangement of their electrons.

Tiny magnets could hold the secret to new quantum computers

Electrons do not orbit around the nucleus the way the earth orbits the sun. Rather, they zip around somewhat randomly. But we can define areas where there is a high probability of finding electrons. These clouds of probability are called “orbitals.”

For the smallest atoms, these orbitals are simple spheres surrounding the nucleus. However, as the atoms get larger and contain more electrons, orbitals begin to take on strange and complex shapes.

In very large atoms like uranium and thorium (92 and 90 electrons respectively), the outermost orbitals are a complex assortment of party balloon, jelly bean, dumbbell and hula hoop shapes. The electrons in these orbitals are high-energy. While scientists can guess at their quantum properties, nobody knows for sure how they will behave in the real world.

Quantum tunneling is a key part of any number of phenomena, including nuclear fusion in stars, mutations in DNA and diodes in electronic devices.

To understand quantum tunneling, imagine a toddler rolling a ball at a mountain. In this analogy, the ball is a particle. The mountain is a barrier, most likely a semiconductor material. In classical physics, there’s no chance the ball has enough energy to pass over the mountain.

But in the quantum realm, subatomic particles have properties of both particles and waves. The wave’s peak represents the highest probability of finding the particle. Thanks to a quirk of quantum mechanics, while most of the wave bounces off the barrier, a small part of that wave travels through if the barrier is thin enough.

For a single particle, the small amplitude of this wave means there is a very small chance of the particle making it to the other side of the barrier.

However, when large numbers of waves are traveling at a barrier, the probability increases, and sometimes a particle makes it through. This is quantum tunneling.

Quantum wells: Where electrons get stuck

Quantum wells are also important, especially for devices such as light emitting diodes (LEDs) and lasers.

Like quantum tunneling, to build quantum wells, you need alternating layers of very thin (10 nanometers) material where one layer is a barrier.

While electrons normally travel in three dimensions, quantum wells trap electrons in two dimensions within a barrier that is, for practical purposes, impossible to overcome. These electrons exist at specific energies—say the precise energies needed to generate specific wavelengths of light.