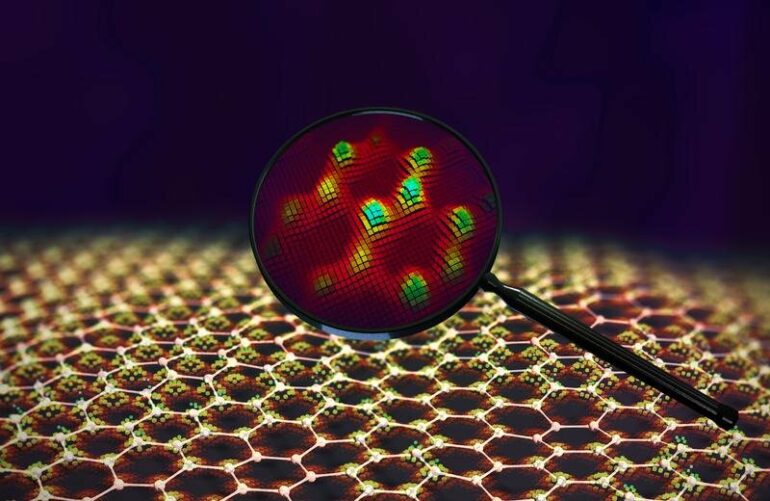 Researchers from the Institute of Laser Physics at Universität Hamburg have developed a new technique for quantum gas microscopy that now allows imaging of three-dimensional quantum systems. In the journal Nature, they report on the new method, which can be used to explore entirely new regimes.

In quantum simulation, researchers study a controlled quantum system in the laboratory to understand the physics of another, less controlled system. For example, one uses ultracold atoms trapped in standing waves of laser light to mimic the physics of electrons in solid-state materials and gain new insights into their quantum phases. In addition to the controlled preparation of the system, imaging is also crucial. For example, quantum gas microscopes allow the detection of all particles in the quantum system and thus give access to arbitrary correlation functions to characterize the state. This technology is based on the optical resolution of the lattice sites at intervals of typically half a micrometer and was therefore previously limited by depth of field to two-dimensional systems.

In the new method developed by the Hamburg researchers led by Dr. Christof Weitenberg and Prof. Klaus Sengstock, both of whom also conduct research in the Cluster of Excellence “CUI: Advanced Imaging of Matter,” this is now overcome, and the resolution of three-dimensional systems is also possible. For this purpose, the scientists use so-called matter wave optics, i.e., a magnification of the density distribution of the ultracold atoms themselves by a factor of up to 90. The optical imaging of the atoms after this magnification is then simply possible without limitation of diffraction or depth of field. Matter-wave optics is based on a lens in the form of a harmonic trap, which is turned on for a quarter period, and a subsequent free expansion of the atoms. Both processes lead to a transformation between real space and momentum space and, in combination, to the magnifying image.

The researchers use the new technique to study Bose-Einstein condensates of ultracold rubidium atoms in an optical lattice. In this way, they can make a particularly precise measurement of the phase transition into the Bose-Einstein condensate. Next, the researchers want to further develop the new microscopy technique. This should make it possible to detect all atoms individually in a regime of just a few atoms per lattice site. In addition, by modifying the matter-wave optics, it will be possible to measure not only the density but also the coherence properties of the system in a spatially resolved manner. Luca Asteria, who developed the technique with his colleagues, explains, “With this microscopy technique, we can explore completely new regimes that were not accessible before.”