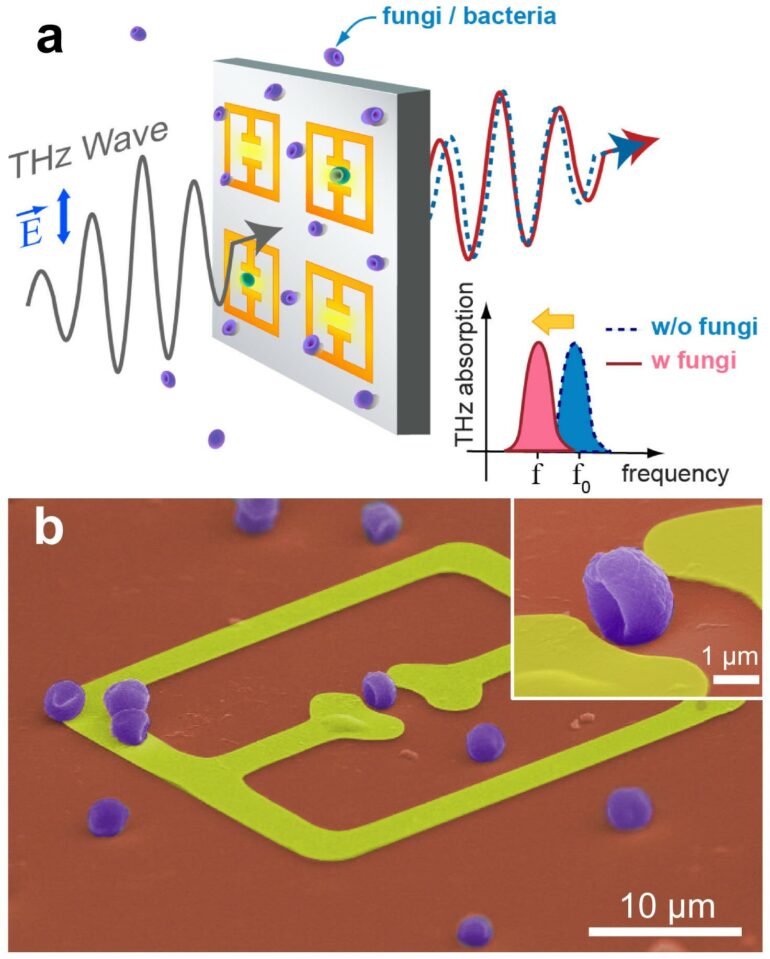 Detecting electromagnetic waves in the terahertz frequency range remains a challenging problem. Researchers from the University of Cambridge, together with physicists from the University of Augsburg, have recently discovered a new physical effect which could change that. In a new study, the scientists are now developing a theory explaining the mechanism behind it. Their findings make it possible to construct small, inexpensive, and highly sensitive terahertz detectors. These could be used, for example, in medical diagnostics, for contactless security checks, or for faster wireless data transmission. The results of the new theory have been published in the journal Physical Review B.

When X-rays or UV rays fall on a metallic surface, they knock electrons out of the material. This “photoelectric effect” can form the basis for detectors that detect the presence of electromagnetic waves.

In a slightly modified form, a similar effect is used in the recording chips of digital cameras or in solar cells. These react to visible and infrared light. However, its energy is significantly lower than that of UV radiation and is therefore insufficient to release electrons from the material. Instead, the radiation may change electrical properties of semiconductor structures, which are usually poor conductors. When exposed to light, on the other hand, they become conductive or can even generate voltages.

“Recently, together with colleagues from the U.K., we have discovered a new physical effect that allows the construction of highly sensitive detectors,” explains Dr. Sergey Mikhailov from the Institute of Physics at the University of Augsburg. “It is based on semiconductor materials with a two-dimensional electron gas—a thin conductive layer that forms under the semiconductor surface. Under certain conditions, a type of photoelectric effect can be observed even at terahertz frequencies in such a structure. When this semiconductor structure is illuminated by electromagnetic waves, a current is generated in the two-dimensional electron gas in a direction parallel to the semiconductor surface.”

In their current work, the researchers have developed a theory of this “in-plane photoelectric effect” which explains the mechanism in greater detail. Various predictions can be derived from their results. For example, based on the effect, it should be possible to construct detectors that are sensitive to the entire terahertz range (radiation with frequencies between 0.1 and 10 terahertz or with wavelengths between 3 and 0.03 millimeters). “This is an area where any new detection mechanism is of great value,” says Mikhailov. Theoretically, it should also be possible to construct detectors that respond to very low radiation intensities.

These could be used in various applications. For example, skin cancer cells could easily be detected using terahertz radiation. Such detectors could also be used to find the smallest quantities of drugs or explosive material at security checkpoints. In addition, terahertz waves oscillate back and forth faster than the electromagnetic radiation currently used in mobile communications. For this reason, they can transmit significantly more information in the same amount of time. The new detectors could therefore provide a boost in speed for the mobile Internet.

Citation:
New theory for detection of terahertz electromagnetic waves gives hope for advances in IT and medicine (2022, September 2)