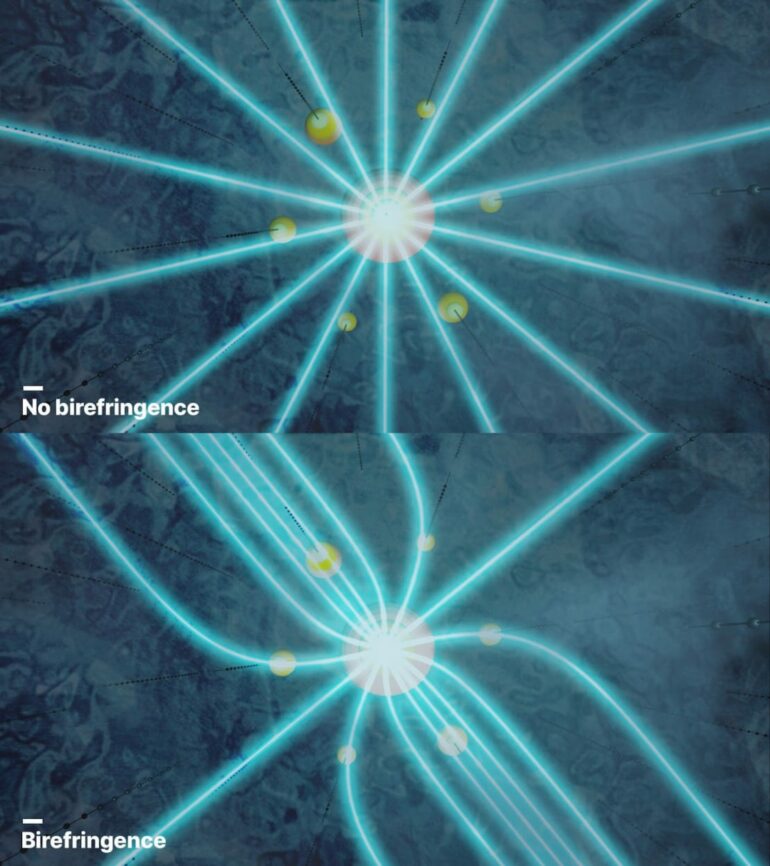 Every second, 100 trillion neutrinos pass through the human body. These tiny, almost massless particles travel tremendous distances through space while carrying information about their sources and are created by some of the most energetic phenomena in the universe. But neutrinos are incredibly difficult to detect, requiring a one-of-a-kind detector that can “see” these nearly invisible particles.

On December 18, 2010, the IceCube Neutrino Observatory, located at the South Pole, was completed. Designed to search for high-energy cosmic neutrinos, the detector consists of an array of 5,160 optical sensors, called digital optical modules (DOMs), buried in a cubic-kilometer of Antarctic ice. When a neutrino interacts with a molecule in the ice, blue light is emitted from the resulting secondary charged particles through a process called Cherenkov radiation. The light then travels through the ice and may reach some of the DOMs, where it is detected. Researchers can then reconstruct the energy and direction of the particle, a process that relies on knowledge of the optical properties of the ice.

In 2013, the IceCube Collaboration reported a unique observation where the observed brightness of a light source depends on the direction of the light, an effect termed “ice optical anisotropy.” Up until now, researchers have attempted to describe the anisotropy with variations to impurity-induced absorption and scattering to limited avail.

In a new study submitted to The Cryosphere, IceCube reports an optical effect that has not been previously described. The effect is the result of the birefringent properties of the elongated ice crystals that deflect light into two directions. The new knowledge gained was incorporated in a new birefringence-based ice optical model used in detector simulation, SpiceBFR, that has substantially improved the interpretation of the light patterns resulting from particle interactions in the ice.

“The ice optical model in use by the IceCube Collaboration has been in development since the early days of the predecessor experiment AMANDA,” said Dmitry Chirkin, an associate scientist at the University of Wisconsin-Madison. “For over 20 years, we have been adding bits of discovery to our understanding of the ice, including the disappearance of trapped air bubbles at depths well above the detector and that, at deeper depths, the South Pole ice sheet contains the cleanest ice on the planet. Another discovery is the optical ice anisotropy, which is the main subject of the study that was motivated by the new understanding in our paper.”

To improve on previous attempts to describe the anisotropy, the collaborators looked closely at the anisotropy effect, finding a correlation between depth development of ice crystal properties and the anisotropy effect. This led the researchers to believe that the many randomly assorted small crystals that make up the ice were at play in the observed anisotropy.

“Things really got rolling when we realized that curved photon trajectories with tiny, subdegree per meter deflections would be able to accurately describe the data,” said Dr. Martin Rongen, a researcher at Johannes Gutenberg University Mainz (JGU) and a lead on the analysis. “Indeed, when calculating and simulating the light diffusion through polycrystalline ice as present in IceCube, where crystals are on average elongated along the ice flow direction, a mean deflection arises.”

For the study, researchers ran simulations that modeled different paths the light could travel within the detector. They then compared simulated data with a large calibration dataset taken from IceCube. The IceCube calibration data set comprises data from 60,000 LEDs, equipped to all of the DOMs, that emit consistent light pulses into the ice, which are then used to calibrate the optical properties of the ice. From the comparison, researchers were able to infer the mean shape and size of ice crystals within IceCube. This exciting new discovery prompts the generation of new simulations and the adaptation of current reconstruction methods to account for the SpiceBFR model.

Not only will this new understanding help IceCube in improving reconstructed neutrino interactions, but it also has implications for the field of glaciology as a whole. “Ice crystal properties are studied in particular to understand ice flow mechanics, which can then be used to predict the Antarctic mass balance and resulting sea-level rise in a changing climate,” said Rongen.

A quantum drum that stores quantum states for record-long times