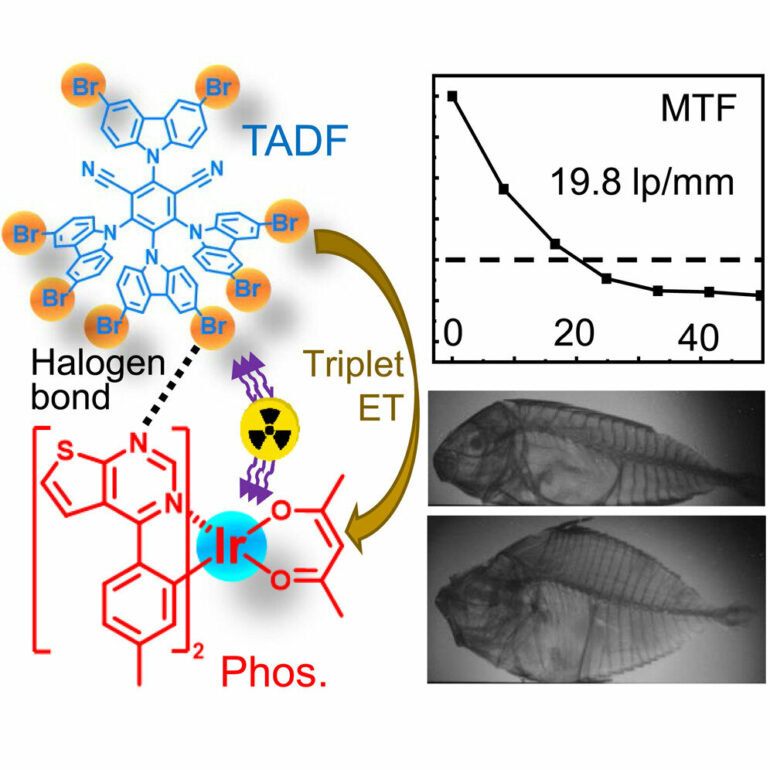 A scintillator is a material that, when hit by high-energy ionizing radiation such as X-rays, absorbs the energy and reemits some of it as low energy visible light. Scintillators are widely used for X-ray imaging screens in multiple applications, from airport security scanners to medical radiography. However, most existing scintillators are made from ceramic or perovskite materials, which are often fabricated under harsh conditions and can be plagued with poor stability over time when exposed to light and air.

“Organic-based scintillators have inherent advantages, such as low toxicity, high mechanical flexibility, low cost and straightforward large-scale production,” says Jian-Xin Wang at KAUST, who worked on the project under the supervision of Omar Mohammed and co-workers. “However, balancing the X-ray absorption capability, exciton utilization efficiency and photoluminescence quantum yield of organic scintillators has proven challenging.”

To date, organic scintillator materials have been hampered by the small range of X-ray frequencies that they can naturally absorb. However, Wang and co-workers realized that X-ray absorption should increase dramatically as the atomic number of the incorporated elements increases. In particular, the team hypothesized that the addition of heavy atoms to the scintillator material could resolve this issue. X-ray photons can interact efficiently with heavy atoms due to their photoelectric effect—the emission of electrons under excitation from radiation.

“We used a simple molecular engineering strategy to design novel organic scintillators,” says Wang. “We began by introducing chlorine, bromine or iodine to thermally activated delayed fluorescence (TADF) chromophores. We then observed how these heavy atoms altered the efficiency and resolution of the resulting X-ray images.”

TADF chromophores are useful because they exist in an excited quantum “triplet state” in the form of excitons—bound states of electrons and electron holes that are created when a high-energy X-ray photon is absorbed, “lifting an electron out of its hole.” The triplet state converts to a singlet state when the chromophores absorb thermal energy. They can then de-excite to the ground state and emit light in a process called delayed fluorescence.

“This means that, due to the minimized singlet-triplet energy gap, TADF chromophores can harness both the singlet and triplet excitons that are generated when they are exposed to X-ray radiation,” says Wang. “This dramatically improves the exciton utilization efficiency of the scintillator, which in turn provides much higher X-ray spatial imaging resolution and ultralow detection sensitivity,” says Mohammed.

The technique of fabricating screens using scintillators doped with heavy atoms has proved successful so far. One of the team’s scintillators, made using TADF-Br (bromine) chromophores, exceeded the resolution of most reported organic and organometallic scintillation screens.

Related research is published in the journals Nature Photonics and Matter.

The team is currently manufacturing a portable X-ray sensor with their fabricated screen for high-resolution medical imaging, including dental examinations and health checks. Their design could also advance the development of tiny wearable X-ray devices.