Paradoxical material a mashup of three different phases at once, quantum physicists find 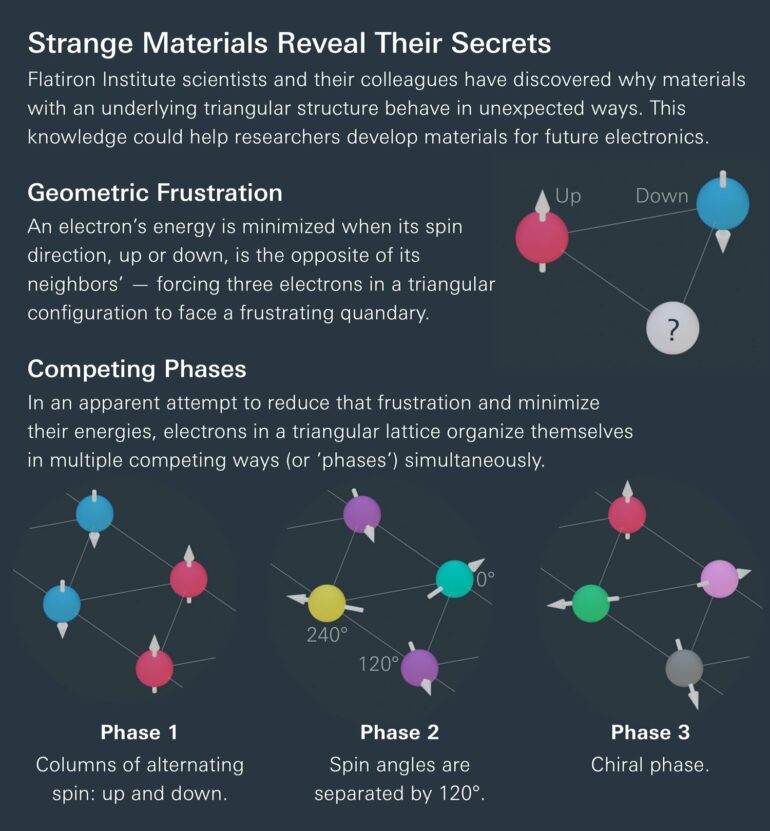 Materials that look like mosaics of triangular tiles at the atomic level sometimes have paradoxical properties, and quantum physicists have finally found out why.

Using a combination of cutting-edge computational techniques, the scientists found that under special conditions, these triangular-patterned materials can end up in a mashup of three different phases at the same time. The competing phases overlap, with each wrestling for dominance. As a result, the material counterintuitively becomes more ordered when heated up, the scientists report October 19 in Physical Review X.

“This is uncharted territory,” says study lead author Alexander Wietek, a research fellow at the Flatiron Institute’s Center for Computational Quantum Physics (CCQ) in New York City. “Experimentalists had seen these peculiar properties, but they didn’t know what the individual electrons in the materials were doing. Our role as theorists is to understand from the bottom up what’s actually happening.”

The findings could help researchers develop materials for future electronics, Wietek says. This is because the odd properties, he says, are indicative of an elusive state of matter sought for potential use in error-correcting quantum computing.

The researchers investigated how the electrons in the materials behave. Electrons determine almost all a material’s properties, from magnetism to conductivity and even color.

Grasping the collective behavior of the electrons is a monumental task. When two particles interact, they become quantum mechanically entangled with one another. Even once they’re separated, their fates remain entwined, and they can’t be treated separately.

The behavior of electrons in a material depends on the layout of the atoms, and the triangular lattice arrangement is fascinating. That’s because electrons have a spin, which can point either up or down. An electron might, for instance, want to have a different spin direction than its neighbors. But in a triangle with three atoms and only two spin directions, “someone is always going to be unhappy,” Wietek says. “This causes the system to fluctuate because it doesn’t really know what to do.” Quantum physicists call this ‘geometric frustration.’

Experimentalists had previously observed unexpected behavior in materials with triangular lattices, such as in twisted layers of tungsten diselenide or boron nitride. Wietek and his colleagues investigated by setting up a simple model to see what the electrons were doing. Their model is a grid of triangles, with each connecting point serving as a site that electrons can inhabit. Each site can host up to two electrons so long as they have opposite spins. In the model, there were as many electrons as sites.

Despite the seeming simplicity of the model, calculating the collective electron behavior was daunting. The researchers therefore combined three different computational methods, with each bringing unique strengths to the problem. Using so many approaches to tackle one problem is a recent cultural shift in the field that allows physicists to tackle thornier problems, Wietek says.

The researchers ran their computations with different temperatures and interaction strengths. They observed that the model transitioned from a metallic phase to an insulating phase. The insulating phase was particularly intriguing. Typically, increasing temperature causes electrons to fluctuate freely and act with greater disorder. But in the case of the triangular lattice, the electrons preferred to localize and become more ordered as the thermostat rose.

By looking at what the electrons were doing, the researchers discovered the cause of this paradoxical effect: The electrons were attempting to organize themselves simultaneously in three competing ways. As the material’s temperature increased, this effect broke down, and the material became more orderly.

In the first of the three attempted orderings, the electrons tried to create alternating columns of electrons pointing either up or down.

In the second ordering, the electrons tilted. While an electron’s spin can point either up or down, it can lean at an angle. In this case, the three electrons in each of the lattice’s triangles orient themselves so that their angles are spread out, with each angle separated by 120 degrees.

The third ordering was the most exciting. The electrons aligned themselves such that their spin angles had a right-handed or left-handed twisting pattern in three dimensions, with the spins constantly fluctuating. This setup could indicate that the system was forming a state of matter called a chiral spin liquid. Such a phase is desired for use in quantum computers to avoid errors.

“Now is a really exciting time because the methods we have allow us to actually make statements about these systems,” Wietek says. “This has changed in the last five years that these methods have become powerful enough to address these problems that in the decades before had been considered too hard.”