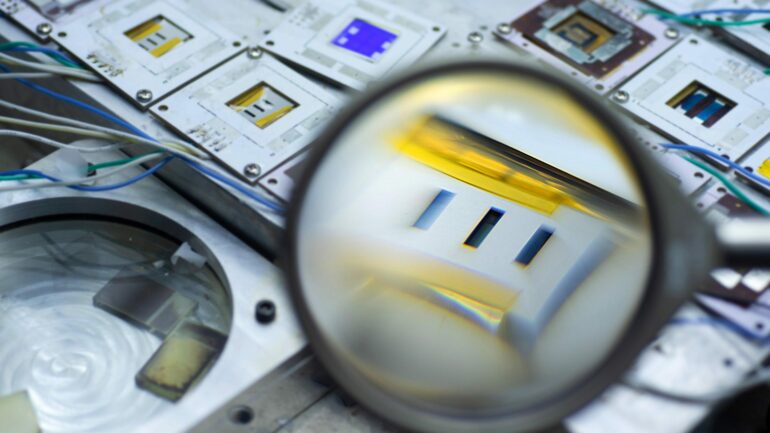 Perovskite LEDs are an emerging technology for next-generation display, lighting and communications. While perovskite LEDs can be produced simply and at low cost, they show clear technological advantages. They are lightweight and offer flexibility comparable to OLEDs, and they have color purity and tunability similar to LEDs based on III-V semiconductors. With only a few years of research performed by scientists around the world, the efficiency of perovskite LEDs already rivals more mature technologies.

However, similar to perovskite solar cells, the poor device stability of perovskite LEDs stands as the grandest challenge toward commercial applications. Typical lifespans of perovskite LEDs are on the order of 10 to 100 hours. In contrast, the minimum lifetime required for an OLED display is 10,000 hours. Researchers face great difficulty reaching this threshold, as halide perovskite semiconductors might be intrinsically unstable due to the ionic nature of their crystal structures—the ions can move around when voltages are applied to the LEDs, leading to material degradation.

Recently, a research group led by Prof. Di Dawei and Prof. Zhao Baodan at the College of Optical Science and Engineering of Zhejiang University made an important breakthrough in this area. They discovered that by using a dipolar molecular stabilizer, it is possible to make efficient and stable perovskite LEDs with ultralong lifetimes, satisfying the demands of commercial applications. The research was carried out in collaboration with the research groups of Prof. Li Cheng at Xiamen University, Prof. Hong Zijian at Zhejiang University, and Prof. Li Weiwei at NUAA and formerly at Cambridge University. A paper titled “Ultrastable near-infrared perovskite light-emitting diodes” was published by the researchers on 8 August 2022 in Nature Photonics.

“Our stabilized perovskite LEDs showed no performance degradation over 5 months (3,600 hours) of continuous operation under a current of 5 mA/cm2. Some of the measurements are still ongoing,” said Di, corresponding author of the paper. “This is really exciting, and is completely beyond expectation. The devices are very stable and some ongoing measurements are unlikely to finish in a year or even longer. To be able to obtain the lifetime data within a reasonable timeframe, we need to use accelerated aging tests widely employed for LEDs,” said Di.

Guo Bingbing, a postgraduate student at Zhejiang University and the first author of the paper, said, “We believe it is important to carry out robust lifetime analyses for the new class of LEDs using as many data points as possible. To achieve this goal, we collected 62 data points from accelerated aging experiments across a broad current density range of 10 to 200 mA/cm2.” The peak external quantum efficiency and energy conversion efficiency of the devices reached 22.8% and 20.7%, respectively. These are the highest efficiency values for near-infrared perovskite LEDs.

The movement of ions in the perovskite materials is a source of instability. Such problem gets much worse under external voltages during LED operation. “Our experiments and calculations showed that the dipolar molecules chemically bond or interact with all positive and negative ions at the perovskite crystal grain boundaries,” said Guo, “and this may be the reason why ion migration becomes more difficult in the stabilized perovskite.”

“The suppression of ionic movement may be seen from the electrical and optical measurements we and our collaborators performed,” Zhao commented.

Go with the flow: New findings about moving electricity could improve fusion devices

The lifetime results suggest that perovskite devices are not “genetically flawed” in terms of stability. “Metal halide perovskites, as an emerging class of semiconductors, were widely believed to be intrinsically unstable, particularly in LED applications where high electric fields are present,” said Di, “our results show that making stable perovskite devices is not ‘mission impossible.'”

The ultralong lifespans are expected to boost confidence in the field of perovskite LEDs, as they now satisfy the stability requirement for commercial OLEDs. The near-infrared LEDs can be useful in infrared display, communications and biological applications. While further efforts are needed in developing visible devices with similar longevity for full-color displays, the demonstration of ultrastable perovskite LEDs has paved the path toward industrial applications.