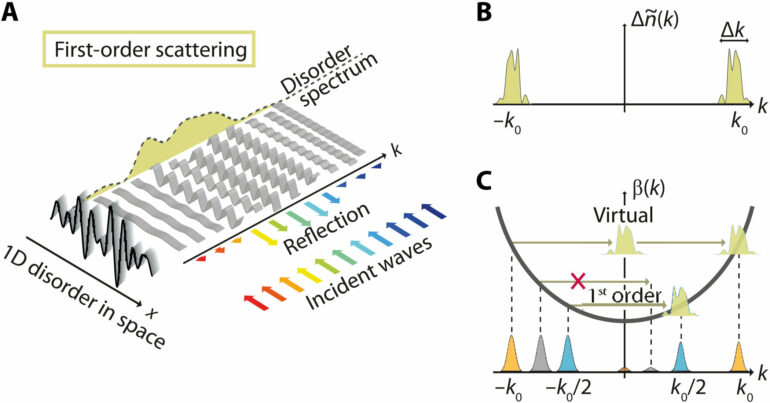 In collaboration with the group of Professor Mordechai Segev (Technion, Israel Institute of Technology), physicists from the group of Professor Alexander Szameit (University of Rostock) have demonstrated a novel type of mechanism that can prevent light waves from spreading freely. So far, the underlying physical effect had been considered far too weak to fully arrest wave expansion. In their recent experiments, the physicists observed that such light localization is nevertheless possible, demonstrating the uncanny sensitivity of wave propagation across a wide range of spatial length scales. Their discovery was recently published in the journal Science Advances.

In 1958, Phil Anderson surprised the international scientific community by predicting that an electrical conductor (such as copper) can abruptly turn into an insulator (such as glass), when the atomic crystal order is sufficiently shaken up. In the jargon of physicists, such “disorder” can pin the otherwise freely moving electrons down, and thus, prevent any substantial electrical currents through the material. This physical phenomenon, known as “Anderson localization,” can only be explained by modern quantum mechanics, where electrons are treated not only as particles, but also as waves. As it turns out, this effect, for which Phil Anderson was awarded a share of the Nobel Prize in Physics 1977, applies also to classical settings: Disorder can likewise suppress the propagation of sound waves or even light beams.

The research of the physics professors Alexander Szameit and Mordechai Segev deals with the properties of light and its interaction with matter. Recently, the team of Professor Segev made an astonishing discovery: Light waves may even show Anderson localization induced if the disorder is practically to them. Going far beyond Phil Anderson’s original considerations, this new type of disorder exclusively contains spatially periodic distributions with certain wavelengths.

“Naively, one would expect that only those waves whose spatial distributions somehow matches the length scales of the disorder can be affected by it and potentially experience Anderson localization,” explains Sebastian Weidemann, who is a Ph.D. student at the Institute for Physics in the group of Professor Szameit.

“Other waves should essentially propagate as if there were no disorder at all,” continues Dr. Mark Kremer, who is also from the group of Professor Szameit.

In contrast, the recent theoretical work from the Technion team suggested that the propagation of waves could be dramatically affected even by such “invisible disorder.”

“When light waves can interact multiple times with the invisible disorder, a surprisingly strong effect can build up and arrest all light propagation,” says Ph.D. student Alex Dikopoltsev from the group of Professor Segev as he describes the effect.

In close collaboration, the physicists from Rostock and Israel demonstrate the new localization mechanism for the first time. “To this end, we constructed artificial disordered materials from kilometers of optical fiber. Arranged in an intricate fashion, our optical networks emulate the spatial spreading of electrons in disordered materials. This allowed us to directly observe how practically invisible structures can successfully ensnare light waves,” explains Sebastian Weidemann, who conducted the experiments together with Dr. Mark Kremer.

The discoveries constitute a significant advance in fundamental research on the propagation of waves in disordered media, and potentially pave the way towards a new generation of synthetic materials that harness disorder to selectively suppress currents; whether light, sound or even electrons.

New research furthers understanding of the electronic structure of graphite