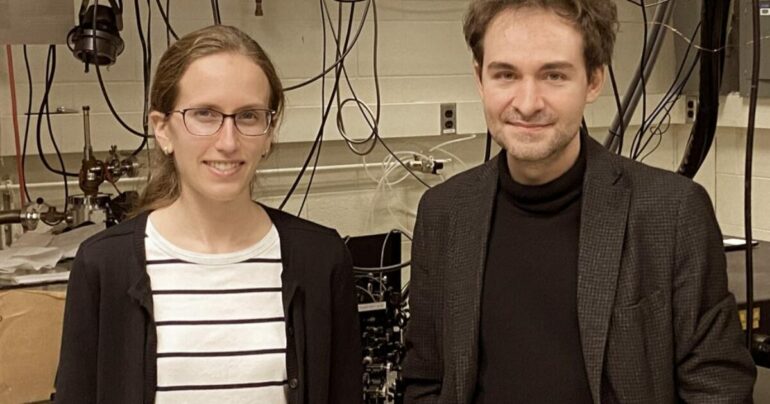 With the help of a “playground” they created for observing exotic physics, MIT scientists and colleagues have not only found a new way to manipulate magnetism in a material with light but have also realized a rare form of matter. The former could lead to applications including computer memory storage devices that can read or write information in a much faster way, while the latter introduces new physics.

A solid material is composed of different types of elementary particles, such as protons and neutrons. Also ubiquitous in such materials are “quasiparticles” that the public is less familiar with. These include excitons, which are composed of an electron and a “hole,” or the space left behind when light is shone on a material and energy from a photon causes an electron to jump out of its usual position. Through the mysteries of quantum mechanics, however, the electron and hole are still connected and can “communicate” with each other through electrostatic interactions.

“Excitons can be thought of as packets of energy that propagate through a system,” says Edoardo Baldini, one of two lead authors of a paper on the work in Nature Communications. Baldini, now a professor at the University of Texas at Austin, was an MIT postdoctoral associate when the work was conducted in the laboratory of Nuh Gedik, an MIT professor of physics. The other lead author is Carina Belvin, a doctoral student in the Gedik group.

“The excitons in this material are rather unique in that they are coupled to magnetism in the system. It was quite impressive to be able to “kick” the excitons with light and observe the associated changes in the magnetism,” says Gedik, who is also associated with MIT’s Materials Research Laboratory.

A magnet works because of a property of electrons called spin (another, more familiar property of electrons is their charge). The spin can be thought of as an elementary magnet, in which the electrons in an atom are like little needles orienting in a certain way. In the magnets on your refrigerator, the spins all point in the same direction, and the material is known as a ferromagnet. In the material used by the MIT team, alternating spins point in opposite directions, forming an antiferromagnet.

The physicists found that a pulse of light causes each of the little electron “needles” in NiPS3 to start rotating around in a circle. The rotating spins are synchronized and form a wave throughout the material, known as a spin wave. Spin waves can be used in spin electronics, or spintronics, a field that was introduced in the 1960s.

Spintronics essentially uses electrons’ spin to go beyond electronics, which is based on their charge. The ability to create spin waves in an antiferroelectric material could lead to future computer memory devices that can read or write information in a much faster way than those based on electronics alone. “We are not there yet. In this paper we’ve demonstrated a process that underlies coherent domain switching: the next step is to actually switch domains,” Baldini says.

Through their work, the team also demonstrated a rare form of matter. When the physicists exposed NiPS3 to intense pulses of light, they found that it turned into a metallic state that conducts electrons while maintaining its magnetism. NiPS3 is ordinarily an insulator (a material that does not conduct electrons). “It is very rare to have an antiferromagnet and a metallic state in the same material,” Belvin says.

The physicists believe this happens because the intense light causes the excitons to collide with each other and break apart into their constituents: electrons and holes. “We are basically destroying the excitons, so that the electrons and holes can move around like those in a metal,” Baldini says. But these mobile particles do not interact with the localized electron spins participating in the spin wave, so the magnetism is retained.

Baldini describes the experimental setup as a “playground for observing many-body physics,” which he defines as “the elegant interplay between different bodies like excitons and spin waves.” He concludes, “what I really liked about this work was that it shows the complexity of the world around us.”