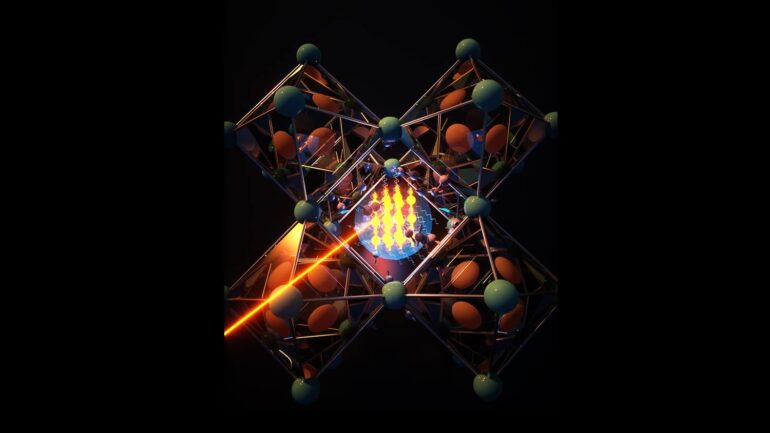 Semiconducting perovskites that exhibit superfluorescence at room temperature do so due to built-in thermal “shock absorbers” which protect dipoles within the material from thermal interference. A new study from North Carolina State University explores the mechanism involved in this macroscopic quantum phase transition and explains how and why materials like perovskites exhibit macroscopic quantum coherence at high temperatures.

Picture a school of fish swimming in unison or the synchronized flashing of fireflies—examples of collective behavior in nature. When similar collective behavior happens in the quantum world—a phenomenon known as macroscopic quantum phase transition—it leads to exotic processes such as superconductivity, superfluidity, or superfluorescenece. In all of these processes a group of quantum particles forms a macroscopically coherent system that acts like a giant quantum particle.

Superfluorescence is a macroscopic quantum phase transition in which a population of tiny light emitting units known as dipoles form a giant quantum dipole and simultaneously radiate a burst of photons. Similar to superconductivity and superfluidity, superfluorescence normally requires cryogenic temperatures to be observed, because the dipoles move out of phase too quickly to form a collectively coherent state.

Recently, a team led by Kenan Gundogdu, professor of physics at NC State and corresponding author of a paper describing the work, had observed superfluorescence at room temperature in hybrid perovskites.

“Our initial observations indicated that something was protecting these atoms from thermal disturbances at higher temperatures,” Gundogdu says.

The team analyzed the structure and optical properties of a common lead-halide hybrid perovskite. They noticed the formation of polarons in these materials—quasiparticles made of bound lattice motion and electrons. Lattice motion refers to a group of atoms that are collectively oscillating. When an electron binds to these oscillating atoms, a polaron forms.

According to Franky So, Walter and Ida Freeman Distinguished Professor of Materials Science and Engineering at NC State, “In layman’s terms, QAVI is a shock absorber. Once the dipoles are protected by the shock absorbers, they can synchronize and exhibit superfluorescence.” So is co-author of the research.

According to the researchers, QAVI is an intrinsic property that exists in certain materials, like hybrid perovskites. However, understanding how this mechanism works could lead to quantum devices that could operate at room temperature.

“Understanding this mechanism not only solves a major physics puzzle, it may help us identify, select and also tailor materials with properties that allow extended quantum coherence and macroscopic quantum phase transitions” Gundogdu says.

The research appears in Nature Photonics.