Relationship between particle structure and flow in disordered materials 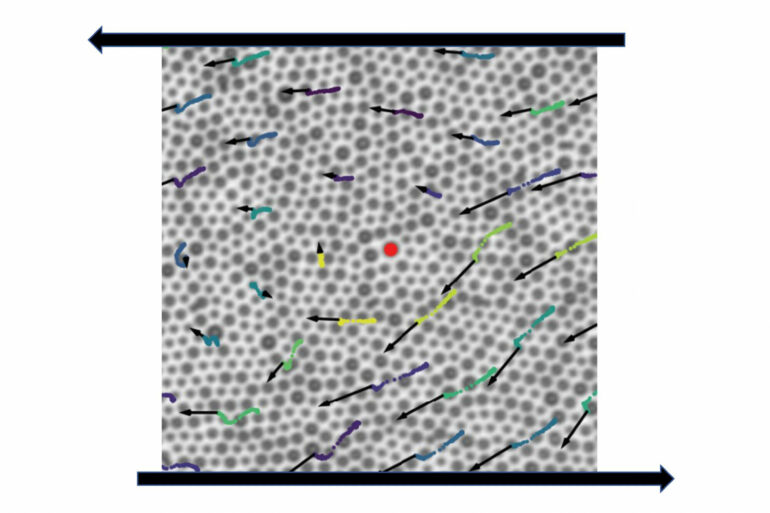 New research published in Nature Physics details the relationship between a disordered material’s individual particle arrangement and how it reacts to external stressors. The study also found that these materials have “memory” that can be used to predict how and when they will flow. The study was led by Larry Galloway, a Ph.D. student in the lab of Paulo Arratia, and Xiaoguang Ma, a former postdoc in the lab of Arjun Yodh, in collaboration with researchers in the labs of Douglas Jerolmack and Celia Reina.

A disordered material is randomly arranged at the particle-scale, e.g. atoms or grains, instead of being systematically distributed—think of a pile of sand instead of a neatly stacked brick wall. Researchers in the Arratia lab are studying this class of materials as part of Penn’s Materials Research Science & Engineering Center, where one of the program’s focuses is on understanding the organization and proliferation of particle-scale rearrangements in disordered, amorphous materials.

The key question in this study was whether one could observe the structure of a disordered material and have some indication as to how stable it is or when it might begin to break apart. This is known as the yield point, or when the material “flows” and begins to move in response to external forces. “For example, if you look at the grains of a sand castle and how they are arranged, can I tell you whether the wind can blow it over or if it has to be hit hard to fall over?” says Arratia. “We want to know, just by looking at the way the particles are arranged, if we can say anything about the way they’re going to flow or if they are going to flow at all.”

While it has been known that individual particle distribution influences yield point, or flow, in disordered materials, it has been challenging to study this phenomenon since the field lacks ways to “quantify” disorder in such materials. To address this challenge, the researchers collaborated with colleagues from across campus to combine expertise across the fields of experimentation, theory, and simulations.

For the experiments, the researchers track individual particles on top of a liquid-air interface akin to what coffee grounds floating on top of water look like, the researchers say. Then, they use a magnetic needle that moves back and forth to apply a shearing force. With this system, the researchers are able to systematically apply forces to 50,000 particles, track their detailed movement, and use complex image analysis to see if, for example, two neighboring particles remain next to one another after a shearing force is applied.

One of the challenges of this study was finding a metric that could help characterize disorder; to do this, the researchers turned to a concept known as excess entropy. While this idea has been used before to study simple liquids, its application in these larger granular systems—where temperature does not influence particle motion—was conceptually very new, says Galloway. “We’re taking thermodynamics and applying some of its concepts to something that people generally don’t think thermodynamics applies to,” he says.

To help connect their experimental results to theories of excess entropy, the Arratia lab worked with colleagues from the Reina group, who have theoretical expertise in non-equilibrium thermodynamics, as well as colleagues from the Yodh lab, who have experimented with excess entropy concepts to elucidate equilibrium and non-equilibrium systems. In addition, Jerolmack’s group shared their expertise in studying particle flow to help connect the complex experimental results with simulations.

One of the most significant findings from this study is that disordered materials can “remember” the forces that were applied to them and that this memory can be measured by looking at individual particle distributions. “If you zoom in and look at where all the different particles are, you can read out what memories are stored in there,” Galloway says.

The researchers also found that disordered materials lose this memory when a threshold of stress is surpassed, which occurs at the same time the material reaches its yield point and starts to flow. “If you apply a little bit of stress, the material will remember, and it will go back to the original state,” says Arratia. “But if you start shearing with more force, it starts losing its memory. That is exactly where we find that the material gives and begins to flow, and that critical stress is related to the loss of memory.”

While the concept of memory in disordered materials had been known for some time, the strong correlation seen in their results between particle distribution, flow, and memory surprised the researchers. Moving forward, they are planning to build on this work by studying other particle sizes and types, research that could help address how universal this concept is and how their results relate to thermodynamics and excess entropy more broadly.

Arratia adds that with such a wide range of systems that act like disordered materials, from eroding hillsides at risk of causing mudslides to living organisms such as biofilms, the possible implications for fields beyond thermodynamics are numerous. “I hope that this work will become something that we can apply to different, disparate systems from skin, mudslides, biofilms, and many things that are disordered and also flow,” Arratia says.