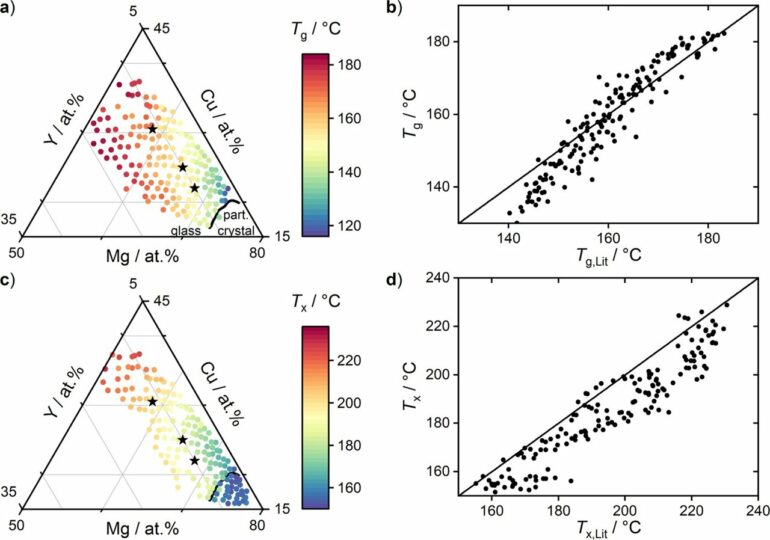 The fragility of liquid—that is, how the fluidity of a liquid changes with temperature—has long been believed to be a key factor in understanding liquids and also how they form into glasses. However, a reliable way to measure fragility in liquids has been elusive. Now, a team of researchers have developed a better way to determine this critical property.

The results are published in Nature Communications.

In the lab of Jan Schroers, professor of mechanical engineering & materials science, the researchers developed a method they call the film inflation method (FIM) that measures the fragility of a wide range of metallic glass-forming liquids. By doing so, not only did the researchers get a clearer sense of the liquids’ properties, but it also contradicted a long-held assumption in the field that a low fragility is better for the formation of metallic glasses, a material that’s stronger than even the best metals, but with the pliability of plastic. These materials owe their properties to their unique atomic structures: when metallic glasses cool from a liquid to a solid, their atoms settle into a random arrangement and do not crystallize the way traditional metals do.

Schroers said the method is a “big step toward” figuring out the tricky physics of metallic glass. The liquid part of the formation process is especially confounding.

“The liquid state is the most difficult state for us to understand, to measure,” he said. “Essentially everything is known about solids, how the atoms arrange, and we can calculate it all on a computer—you almost don’t need to do experiments anymore. Gas is also very easy, because the atoms are so far apart from each other, they don’t really interact. Liquid, as a state, we almost know nothing about it.”

That could change with the new method, which Schroers developed with Sebastian Kube, a former Ph.D. student in his lab and lead author of the study.

“This allows us to extend theories on glass formation, which is one of the biggest mysterious in physics,” he said.