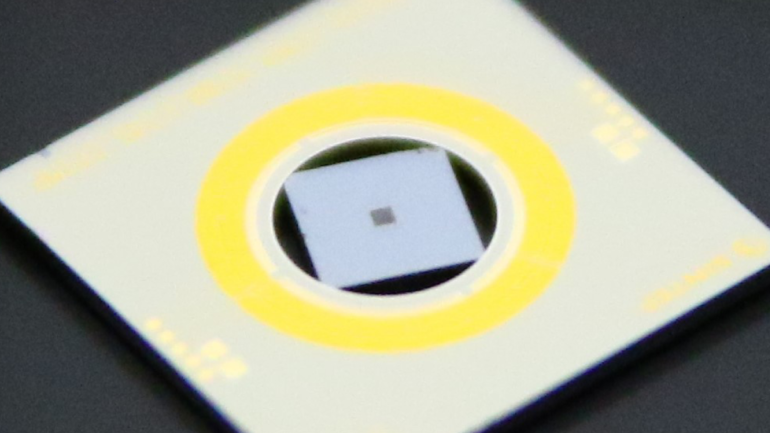 For the first time, researchers have created a metasurface lens that uses a piezoelectric thin film to change focal length when a small voltage is applied. Because it is extremely compact and lightweight, the new lens could be useful for portable medical diagnostic instruments, drone-based 3D mapping and other applications where miniaturization can open new possibilities.

“This type of low-power, ultra-compact varifocal lens could be used in a wide range of sensor and imaging technologies where system size, weight and cost are important,” said research project leader Christopher Dirdal from SINTEF Smart Sensors and Microsystems in Norway. “In addition, introducing precision tunability to metasurfaces opens up completely new ways to manipulate light.”

Dirdal and colleagues describe the new technology in the journal Optics Letters. To change focal length, a voltage is applied over lead zirconate titanate (PZT) membranes causing them to deform. This, in turn, shifts the distance between two metasurface lenses.

“Our novel approach offers a large displacement between the metasurface lenses at high speed and using low voltages,” said Dirdal. “Compared to state-of-the-art devices, we demonstrated twice the out-of-plane displacement at a quarter of the voltage.”

The researchers made the new lens using metasurfaces—flat surfaces that are patterned with nanostructures to manipulate light. They are particularly interesting because they can integrate several functionalities into a single surface and can also be made in large batches using standard micro- and nanofabrication techniques at potentially low cost.

“Most systems incorporating metasurfaces so far are static, meaning that the optical functionality is locked after fabrication,” said Dirdal. “However, many of the optical components that are critical for cameras, 3D-mapping lidar systems and holographic displays require adaptivity.”

Tunability, or adaptivity, in conventional optical systems is typically accomplished using bulky and power-consuming components such as stepper motors, rotators or magnets. To create this capability on a smaller scale, the researchers turned to MEMS technology. These chip-based electrically controlled mechanically moveable parts are fast, require little power and are also compatible with high-volume batch processing techniques, which can reduce the size, cost and weight of optical systems.

Demonstrating a change of focus

Although MEMS actuation has been used recently to create tunable metasurface lenses, Dirdal and colleagues wanted to see if they could achieve even better performance. They did this by designing a device in which a metasurface is suspended on a membrane ring made of a thin-film PZT film, which allows the PZT to move the metasurface when a voltage is applied.

To demonstrate how MEMS-metasurfaces could function as a varifocal lens doublet, they placed a second metasurface lens after the MEMS-metasurface. Varying the separation distance between the lenses through MEMS displacement allows researchers to tune the focal point of the lens doublet on the fly.

The researchers showed that applying 23 volts allowed the PZT membrane to move the metasurfaces 7.2 microns, producing a focal length change of around 250 microns. They note that this range can be further improved with metalenses that have a stronger focusing power and by optimizing the MEMS design for longer stroke actuation. Such tunability would, for instance, be useful for imaging at various depths into tissue to image neurons or blood vessels.

With additional development of the MEMS architecture, the researchers say it will likely be possible to make a commercially relevant tunable lens device. They are also exploring how the MEMS-metasurface combination can be applied to various applications that have a need for small, light and cheap optics without compromising optical quality.

Provided by
The Optical Society