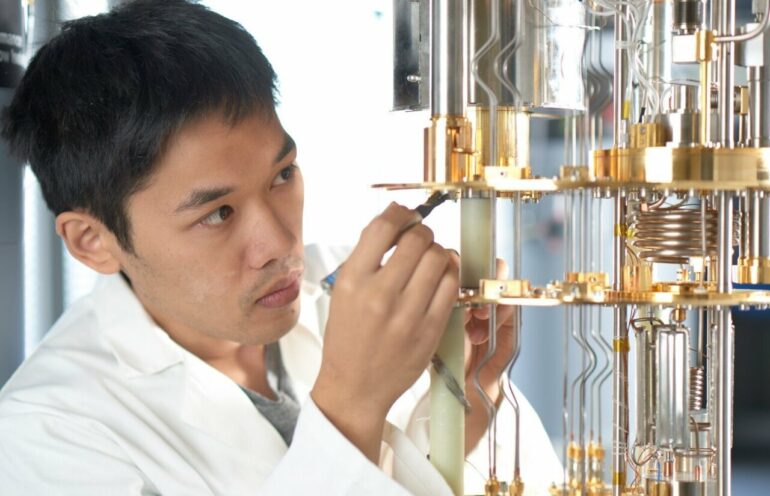 Approximately two decades ago, it was shown theoretically that quantum computers could easily solve certain computationally demanding problems like factoring large numbers into prime numbers or searching efficiently in databases. These possibilities have triggered intense experimental efforts towards the physical realization of scalable quantum processors (such that it would be possible to increase the size of their quantum register).

Superconducting transmon qubits are today considered an essential building block of these processors. Over the years, the fidelity of transmons (i.e., their ability to make calculations without errors) has constantly improved, allowing for the recent race of tech giants such as IBM, Amazon and Google to demonstrate quantum supremacy.

As the processors become larger and larger (IBM just announced a processor with more than 400 transmon qubits), the questions of fidelity and scalability of such systems becomes more and more stringent and noticeable. In particular, transmon qubits are weakly non-linear objects, which intrinsically limits their fidelity and brings concerns on scalability due to problems of frequency crowding.

Dr. Michael Stern and co-workers from the Department of Physics and Quantum Entanglement Science and Technology (QUEST) Center at Bar-Ilan University in Israel are attempting to build superconducting processors based on a different type of circuit called superconducting flux qubits.

A flux qubit is a micron-sized superconducting loop where electrical current can flow clockwise or counter-clockwise, or in a quantum superposition of both directions. Contrary to transmon qubits, these flux qubits are highly non-linear objects and can thus be manipulated on very short time scales with high fidelity.

The main drawback of flux qubits, however, is that they are particularly difficult to control and to fabricate. This leads to sizeable irreproducibility and has limited their use in the industry until now to quantum annealing optimization processes such as the ones realized by D-Wave.

Using a novel fabrication technique and state-of the-art equipment, a group led by Dr. Stern at Bar-Ilan University, in collaboration with Prof. David Jamieson from the University of Melbourne (Australia), has successfully overcome a significant hurdle in solving this paradigm. In a paper just published in Physical Review Applied, Dr. Stern and his Ph.D. student Tikai Chang reveal a novel method to control and fabricate flux qubits with unprecedented long and reproducible coherence times.

“We have recorded significant improvement in the control and reproducibility of these qubits. This reproducibility enabled us to analyze the factors that impede coherence times and systematically eliminate them,” says Dr. Stern. “This work paves the way for many potential applications in the fields of quantum hybrid circuits and quantum computation,” he concludes.