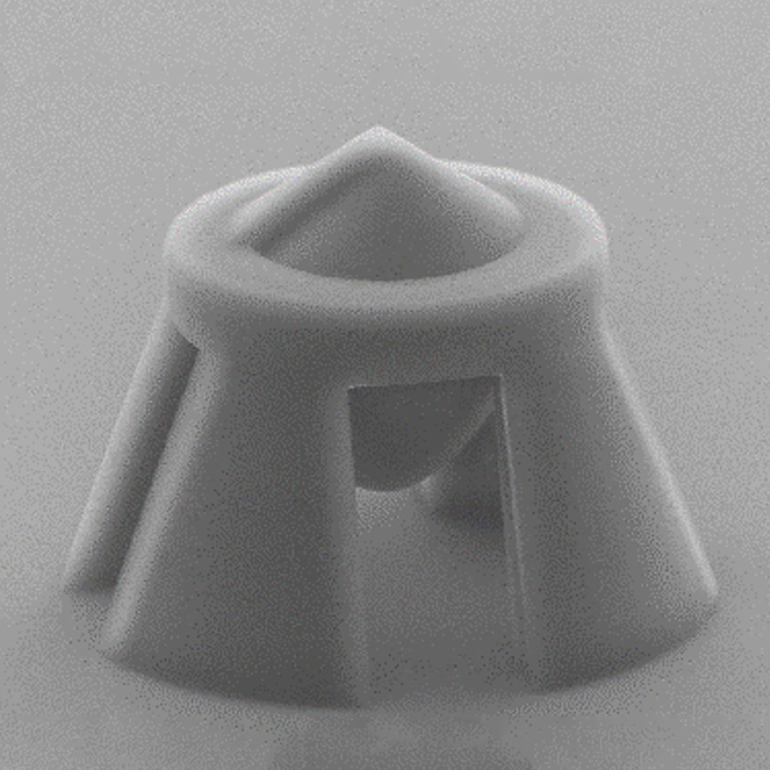 Researchers have shown that 3D laser printing can be used to fabricate a high-quality, complex polymer optical device directly on the end of an optical fiber. This type of micro-optical device—which has details smaller than the diameter of a human hair—could provide an extremely compact and inexpensive way to tailor light beams for a variety of applications.

“Communication technologies, the internet and many other applications are based on optical fibers,” said research team leader Shlomi Lightman from Soreq Nuclear Research Center in Israel. “When light comes out of the fiber, large bulky optical elements are typically used to route it to the next location. Our approach minimizes both the size and cost for this process by integrating the routing process into the fiber itself.”

In the journal Optics Letters, Lightman and colleagues describe how they fabricated the tiny multi-component beam shaper directly onto a fiber. The device turns normal laser light into a twisted Bessel beam that carries orbital angular momentum and doesn’t expand in space like typical light beams.

“The ability to create a Bessel beam directly from an optical fiber could be used for particle manipulation or fiber-integrated stimulated emission depletion (STED) microscopy, a technique that produces super-resolution images,” said Lightman. “Our fabrication method could also be used to upgrade an inexpensive lens to a higher quality smart lens by printing a smart small structure on it.”

Although this 3D direct laser printing has been used for some time, it is difficult to get the scale and alignment correct when fabricating such small optics on a fiber tip. “We were able to overcome this hurdle by performing highly accurate 2D and 3D simulations before we began the fabrication process,” said Lightman. “In addition, we had to carefully think about how to integrate the optical elements with each other and then align that with the fiber core.”

After careful planning based on the simulations, the researchers used a commercial 3D direct laser writing system and a high optical quality photosensitive polymer to print a 110-micron-tall optical device 60 microns in diameter and 110 microns tall on the end of a single mode optical fiber. The device included both a parabolic lens for light collimation and a helical axicon lens to twist the light. This turned light exiting the fiber into a twisted Bessel beam.

To analyze the quality of the fabricated optical device, the researchers built an optical measuring system to capture the shaped beam propagating from the modified fiber. They observed very low diffraction in the beam, which means that it could be useful for applications like STED microscopy and particle manipulation.

They also found that the laser power could reach close to 10 MW/cm2 before damaging the fabricated micro-optical device. This showed that even though the device was made from polymer, which is more susceptible than glass to heat damage from high powers, it could still be used to produce relatively high laser power.

Now that the researchers have demonstrated that precise multi-element micro-optics can be created using this direct 3D laser printing method, they are experimenting with using hybrid photosensitive materials that contain a low percentage of polymer. These materials could make it possible to produce higher quality optics that also have a longer shelf life and are more resistant to high laser powers, compared to polymer materials.