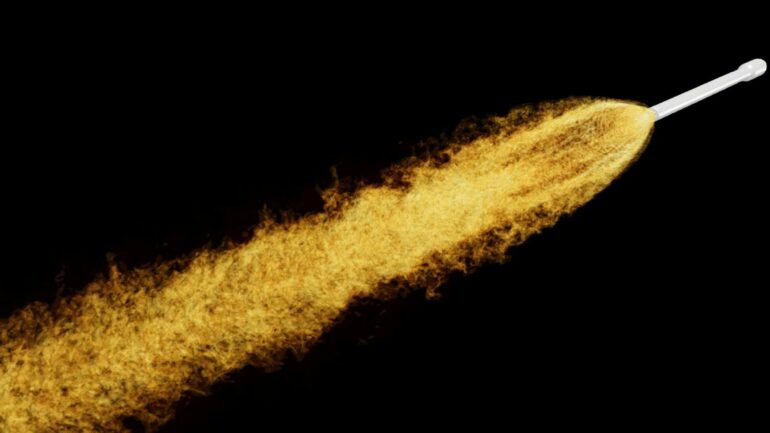 Reusable space technology has led to a rise in space transportation at a lower cost, as popularized by commercial spaceflights of companies like SpaceX and Virgin Galactic. What is poorly understood, however, is rockets’ propulsion emissions creating significant heating and compositional changes in the atmosphere.

In Physics of Fluids, researchers from the University of Nicosia in Cyprus assessed the potential impact of a rocket launch on atmospheric pollution by investigating the heat and mass transfer and rapid mixing of the combustion byproducts for altitudes up to 67 kilometers into the atmosphere.

The team modeled the exhaust gases and developing plume at several altitudes along a typical trajectory of a standard present-day rocket. They did this as a prototypical example of a two-stage rocket to transport people and payloads into Earth’s orbit and beyond.

“We show that pollution from rockets should not be underestimated as frequent future rocket launches could have a significant cumulative effect on the Earth’s climate,” said co-author Ioannis Kokkinakis.

The researchers found the production of thermal nitrogen oxides (NOx), components of the combustion exhaust, can remain high up to altitudes with an ambient atmospheric pressure above or even slightly below the nozzles’ exit pressure, i.e., below an altitude of approximately 10 km.

At the same time, the emitted mass of carbon dioxide as the rocket climbs 1 kilometer in altitude in the mesosphere is equivalent to that contained in 26 cubic kilometers of atmospheric air at the same altitude.

They found the impact on the atmosphere locally and momentarily in the mesosphere can be significant. While air currents will gradually transport and mix the exhaust CO2 throughout the atmosphere, eventually bringing the CO2 back down to its naturally occurring levels, the time scale over which this happens is not clear.

The scientists believe a certain number of rocket launches might still exist above which mesospheric carbon dioxide could accumulate over time, thus increasing the naturally occurring levels and affecting our climate.

Their results suggest that in the worst-case scenario, sufficient NOx could be produced over the time it takes the rocket to reach an altitude of 10 kilometers to pollute over 2 cubic kilometers of atmospheric air with a NOx concentration that, according to the World Health Organization, would be at a level hazardous to human health.

“We hope that commercial flight companies, such as SpaceX, Virgin Galactic, and the New Shepard, and their associated engine manufacturers, will consider these effects in future designs,” said Drikakis.