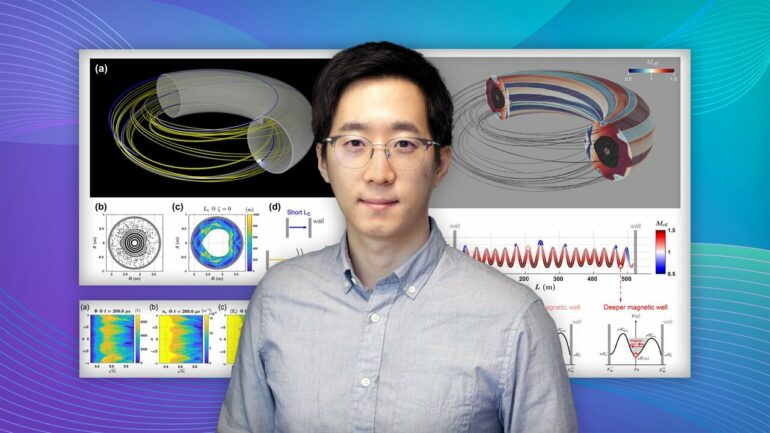 Physicists at the U.S. Department of Energy’s (DOE) Princeton Plasma Physics Laboratory (PPPL) have proposed the source of the sudden and puzzling collapse of heat that precedes disruptions that can damage doughnut-shaped tokamak fusion facilities. Coping with the source could overcome one of the most critical challenges that future fusion facilities will face and bring closer to reality the production on Earth of the fusion energy that drives the sun and stars.

Researchers traced the collapse to the 3D disordering of the strong magnetic fields that bottle up the hot, charged plasma gas that fuels the reactions. “We proposed a novel way to understand the [disordered] field lines, which was usually ignored or poorly modeled in the previous studies,” said Min-Gu Yoo, a post-doctoral researcher at PPPL and lead author of a Physics of Plasmas paper selected as an editor’s pick together with a figure placed on the cover of the July issue. Yoo has since become a staff scientist at General Atomics in San Diego.

The strong magnetic fields substitute in fusion facilities for the immense gravity that holds fusion reactions in place in celestial bodies. But when disordered by plasma instability in laboratory experiments the field lines allow the superhot plasma heat to rapidly escape confinement. Such million-degree heat crushes plasma particles together to release fusion energy and can strike and damage fusion facility walls when released from confinement.

“In the major disruption case, field lines become totally [disordered] like spaghetti and connect fast to the wall with very different lengths,” said principal research physicist Weixing Wang, Yoo’s PPPL advisor and a coauthor of the paper. “That brings enormous plasma thermal energy against the wall.”

Fusion combines light elements in the form of plasma—the hot, charged state of matter composed of free electrons and atomic nuclei—that generates massive amounts of energy. Plasma contains free electrons and atomic nuclei, or ions, and comprises 99% of the visible universe. Scientists around the world are seeking to capture and control the fusion process on Earth to create a clean, carbon-free and virtually inexhaustible source of power to generate electricity.

What hadn’t previously been known was the 3D shape, or topology, of the disarrayed field lines caused by turbulent instability. The topology forms tiny hills and valleys, Yoo explains, leaving some particles trapped in valleys and unable to escape confinement while others roll down the hills and impact the walls of the facility

“The existence of these hills is responsible for the fast temperature collapse, the so-called thermal quench, as they allow more particles to escape to the tokamak wall,” Yoo said. “What we showed in the paper is how to draw a good map for understanding the topology of the field lines. Without magnetic hills, most electrons would have been trapped and could not produce the thermal quench observed in experiments.”

PPPL scientists simulated the thermal quench topology as a complex 3D structure rather than a simple 1D structure as it had been pictured. In doing so, the researchers avoided common over-simplifications that could mislead the physics.

What made the topology difficult to understand was the complex interaction between the electric and magnetic fields inside the facility, Yoo said. PPPL researchers unraveled the interaction using the Laboratory’s GTS code, which simulates the effect of turbulent instability on particle movement. The code revealed that the electric field produced in facilities acts to kick particles among spaghetti-like stochastic magnetic field lines and then facilitates the motion of trapped particles along the field lines that gives rise to the thermal quench.

“This research provides new physical insights into how the plasma loses its energy towards the wall when there are open magnetic field lines,” Yoo said. “The new understanding would be helpful in finding innovative ways to mitigate or avoid thermal quenches and plasma disruptions in the future.”


Citation:
Scientists bring the fusion energy that lights the sun and stars closer to reality on Earth (2022, September 27)