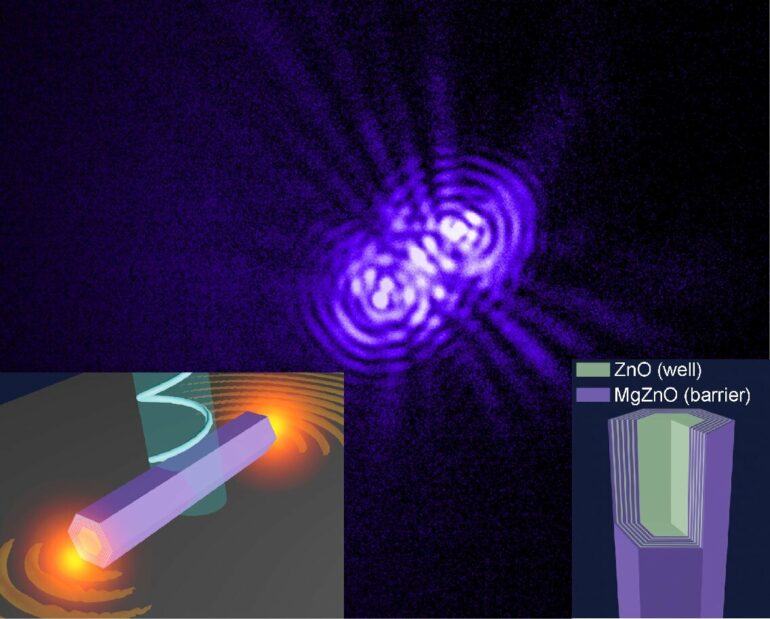 A quantum harmonic oscillator—a structure that can control the location and energy of quantum particles that could, in the future, be used to develop new technologies including OLEDs and miniature lasers—has been made at room temperature by researchers led by the University of St Andrews.

The research, conducted in collaboration with scientists at Nanyang Technological University in Singapore and published in Nature Communications recently, used an organic semiconductor to produce polaritons, which show quantum states even at room temperature.

Polaritons are quantum mixtures of light and matter that are made by combining excitations in a semiconductor material with photons, the fundamental particles that form light. To create polaritons, the researchers trapped light in a thin layer of an organic semiconductor (the kind of light-emitting material used in OLED smartphone displays) 100 times thinner than a single human hair, sandwiched between two highly reflective mirrors.

Polaritons, like moisture in the air, can condense and form a type of liquid. The researchers corralled this quantum liquid within a pattern of laser beams to control its properties. This made the fluid oscillate with a series of harmonic frequencies that resemble the vibrations of a violin string. The shape of these quantized states of vibration matched those of a “quantum harmonic oscillator.”

One of the project leaders Dr. Hamid Ohadi, of the School of Physics and Astronomy at the University of St Andrews, said, “This is a textbook problem that we look at with our students in our quantum physics courses is the quantum harmonic oscillator. We used to think that one needs sophisticated cooling methods to see these oscillators. We found that this fundamental physics phenomenon can be seen at room temperature too.”

His colleague Professor Graham Turnbull added, “By studying this quantum oscillator we are learning how to control the location and movement of polaritons. In the future, we hope to exploit this knowledge to develop new quantum technologies for environmental sensing, or new types of OLEDs and miniature lasers.”

Professor Ifor Samuel, also part of the project team in St Andrews, said, “One of the most remarkable aspects of this study is that we excite the sample in one place, but see (polariton) lasing in another, showing that a quantum mixture or light and matter can travel macroscopic distances. This could be useful not only for lasers, but also for solar cells.”