Searching for matter–antimatter asymmetry with the Higgs boson 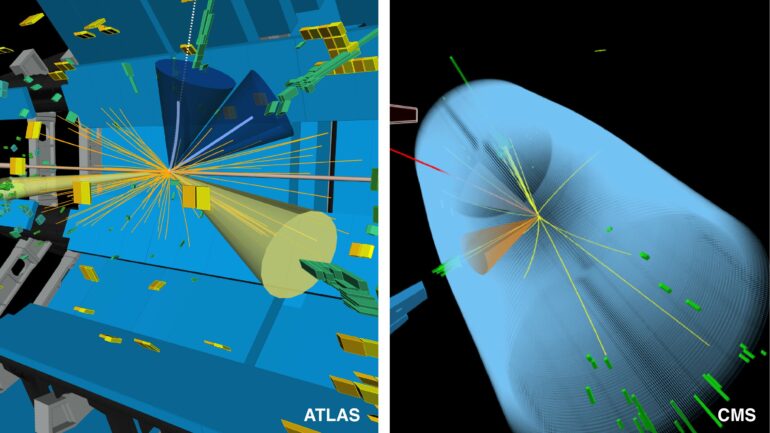 Symmetries make the world go round, but so do asymmetries. A case in point is an asymmetry known as charge–parity (CP) asymmetry, which is required to explain why matter vastly outnumbers antimatter in the present-day universe even though both forms of matter should have been created in equal amounts in the Big Bang.

In two recent independent investigations, the international ATLAS and CMS collaborations at the Large Hadron Collider (LHC) turned to the Higgs boson that they discovered ten years ago to see if this unique particle hides a new, unknown source of CP asymmetry.

The ATLAS and CMS teams had previously searched for—and found no signs of—CP asymmetry in the interactions of the Higgs boson with other bosons as well as with the heaviest known fundamental particle, the top quark. In their latest studies, ATLAS and CMS searched for this asymmetry in the interaction between the Higgs boson and the tau lepton, a heavier version of the electron.

To search for this asymmetry, ATLAS and CMS first looked for Higgs bosons transforming, or “decaying,” into pairs of tau leptons in proton–proton collision data recorded by the experiments during the second run of the LHC (2015–2018). They then analyzed this decay’s motion, or “kinematics,” which depends on an angle, called the mixing angle, that quantifies the amount of CP asymmetry in the interaction between the Higgs boson and the tau lepton.

In the Standard Model, the mixing angle is zero and thus the interaction is CP symmetric, meaning that it remains the same under a transformation that swaps a particle with the mirror image of its antiparticle. In theories that extend the Standard Model, however, the angle may deviate from zero and the interaction may be partially or fully CP asymmetric depending on the angle; an angle of -90 or +90 degrees corresponds to a fully CP-asymmetric interaction, whereas any angle in between, except 0 degrees, corresponds to a partially CP-asymmetric interaction.

After analyzing their samples of Higgs boson decays into tau leptons, the ATLAS team obtained a mixing angle of 9 ± 16 degrees and the CMS team −1 ± 19 degrees, both of which exclude a fully CP-asymmetric Higgs boson–tau lepton interaction with a statistical significance of about three standard deviations.

The results are consistent with the Standard Model within the present measurement precision. More data will allow researchers to either confirm this conclusion or spot CP asymmetry in the Higgs boson–tau lepton interaction, which would have a profound impact on our understanding of the history of the universe.

With the third run of the LHC set to start soon, the ATLAS and CMS collaborations won’t need to wait too long before they can feed more data into their analysis kits to find out whether or not the Higgs boson hides a new source of CP asymmetry.

Citation:
Searching for matter–antimatter asymmetry with the Higgs boson (2022, June 23)