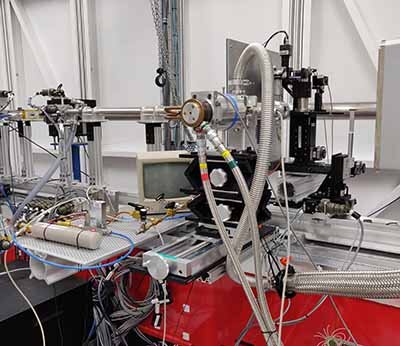 Extreme conditions—severe pressure, intense temperatures, and high levels of radiation— exist all over the earth and beyond. Scientists are using the Canadian Light Source (CLS) at the University of Saskatchewan (USask) to investigate how water and other molecules behave in these extreme environments.

John Tse, a Usask professor of physics and Centennial Enhancement Chair in Material Science, is interested in what happens to organic molecules under extreme pressure and temperature.

Everyday transitions of matter, like how water becomes ice, can look very different in the vacuum of outer space, which is why Tse and several CLS scientists simulated the conditions of space within the CLS’s Brockhouse beamlines.

“The purpose is to look at phenomena that mimic interstellar space,” Tse said. “We try to mimic the conditions so we can look at how things are formed in space.”

Using synchrotron technology, Tse has successfully generated extreme conditions on the beamline, offering a new perspective on how water crystalizes. This may help to explain what happens when liquids and other molecules interact in environments that have strong vacuums and extremely low temperatures.

“When the space shuttle was launched 30 years ago, they found out that water interacted with the organics in the waste lines and it was very interesting to learn how it’s formed,” Tse said.

The findings of the paper, published in the Journal of Physical Chemistry, could also help us understand what happens to water and organic molecules in extreme environments on earth, like oil and natural gas pipelines.

“One other extreme is the BP explosion many years ago [the oil spill in the Gulf of Mexico]. It was due to hydrate formation, a compound of water and small molecules, that packed the pipeline causing it to blow up,” Tse said.

Tse says that hydrate formation is a persistent problem in natural gas transfer pipelines that operate in cold weather, like those on the Canadian prairies. In future experiments, Tse hopes to better understand how these interactions and molecules behave and how to prevent blockages in the lines, which would increase efficiencies and safety in the oil and gas sector.

“These are still academic questions but with very practical applications,” Tse said.

Tse has a long history of working with synchrotrons—from his 1970 Ph.D. project to his work as a Canada Research Chair in synchrotron science. Over the years Tse has used synchrotron light for a variety of questions and has never stuck to one single technique. The CLS allows Tse to explore a range of energies—from low energy like infrared to high energy like hard X-rays—to investigate new problems and find practical solutions.

“This is an exciting instrument that is efficient for the problems I have been looking at over the years and that’s why I use it,” Tse said.