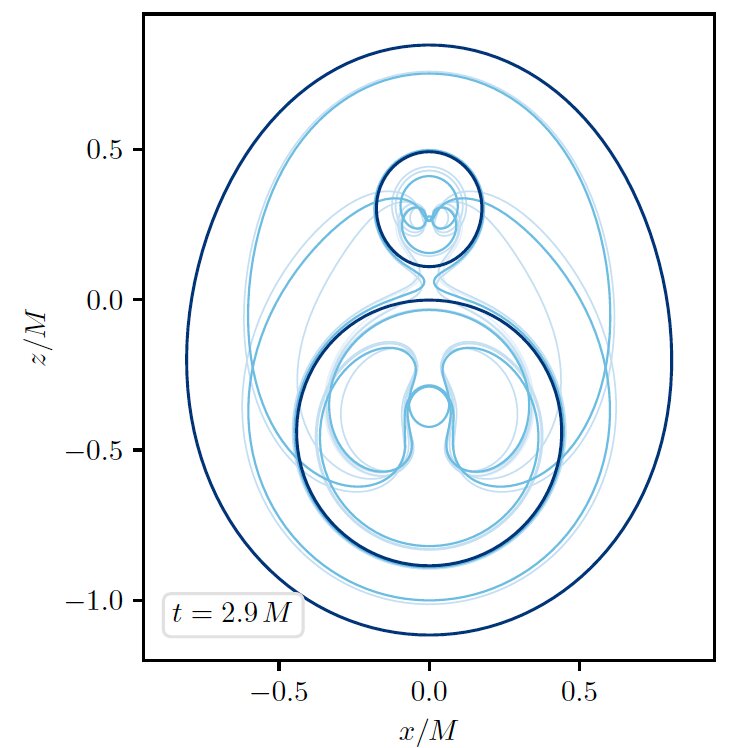 Binary black hole mergers are fascinating cosmological events, which have been theorized to be the among the strongest sources of gravitational waves in the universe. While astrophysicists have carried out extensive research focusing on these events, many questions remain unanswered.

Researchers at the Max Planck Institute for Gravitational Physics in Germany and Memorial University of Newfoundland and Labrador in Canada have recently carried out a study exploring what happens to the original apparent horizons during a merger between two non-spinning black holes. Their paper, published in Physical Review Letters, suggests that when binary black holes merge, apparent horizons vanish by merging with other horizon-like structures.

Apparent horizons are boundaries delineating the edge of a black hole. In their previous works, two of the researchers involved in the recent study had been trying to develop new ways to identify apparent horizons in spacetimes simple enough that their metrics could be written down on paper. Using the methods they developed, they were able to identify several new horizon-like surfaces that had been overlooked by previous works.

“Part of the original inspiration for that study was understanding self-intersecting apparent horizons that had recently been identified during black hole mergers by Daniel and his collaborators,” Daniel Pook-Kolb, Robie A. Hennigar and Ivan Booth, the researchers who carried out the study, told Phys.org, via email. “Then, Ivan was asked to be an examiner for Daniel’s Ph.D. thesis and, while writing his report, realized that the simple methods could also be applied in Daniel’s much more complicated numerically generated merger spacetimes. After the thesis was published, we started collaborating.”

Initially, Pook-Kolb analyzed data from the full numerical simulations he produced as part of his thesis. Almost immediately, he identified a series of new structures that matched the team’s theoretical predictions.

One of the primary objectives of the new study was to gain a better understanding of how two black holes can merge and become one. As the researchers continued their analyses, they became more confident that they would be able to answer this unanswered question.

“For many years, it has been known how the event horizon looks during a merger; that’s the famous pair of pants diagram, but that does not tell us much about the dynamics, especially how the spacetime evolves inside the black holes,” Pook-Kolb, Hennigar and Booth explained. “To get more insight, we look instead at apparent horizons, which are ubiquitous in the numerical relativity community.”

Approximately 50 years ago, Stephen Hawking and George Ellis speculated briefly about what happens to the apparent horizons of binary black holes when they merge, in their book “The Large Scale Structure of Space-Time.” Since then, however, researchers have been unable to paint a full and consistent picture of this phenomenon.

“For a long time, this has been a fairly academic question, as black holes were elusive objects that had never been directly observed individually, let alone witnessing two of them merge,” Pook-Kolb, Hennigar and Booth said. “This has changed dramatically since the first gravitational wave signatures of mergers were detected in 2015. Merger observations are now almost routine. We therefore think that gaining an understanding of all their aspects is interesting in itself.”

In their paper, Pook-Kolb, Hennigar and Booth specifically examined black hole configurations with a certain symmetry, where the whole system remains unchanged after rotations occur around one axis. The method they used to carry out their analysis has three key components.

Firstly, the researchers employed a highly accurate technique for simulating spacetimes, including spacetimes inside a black hole. Secondly, they used a numerical method that allowed them to resolve the horizons, even in instances when they become very distorted.

“The third ‘ingredient’ of our method is a conceptually simple way to find all the possible horizons: The equations for finding apparent horizons are rewritten from complicated equations for surfaces to relatively simple ones for curves,” Pook-Kolb, Hennigar and Booth said. “Once one finds one of these curves, it can be rotated to obtain the full surface. Then the search for horizons becomes a one-dimensional search, which is easy to tackle with today’s computers. To the best of our knowledge, no one fully worked out the mathematics for that before, yet it is what finally enabled us to uncover the structure in the interior of the newly formed black hole.”

Over the past few decades, astrophysicists were able to paint a clear picture of what happens in the exterior spacetime of black holes during binary black hole mergers. In addition, the gravitational waves that were predicted to be associated with these events are now consistently detected.

What happens in the interior spacetime, however, so far remained unclear. The recent work by Pook-Kolb, Hennigar, and Booth sheds some light on what could happen inside binary black holes when they merge.

“The most important result of our study is that it unveiled the fate of the original two horizons,” Pook-Kolb, Hennigar and Booth said. “They both eventually vanish, but they don’t just disappear. Instead, they smoothly annihilate with other horizon-like structures. One might go as far as saying ‘they turn around in time,” and in doing so, they become what we call unstable.”

A further achievement of this recent study is that it introduces a method to easily differentiate between generic marginal surfaces, also known as MOTSs, and MOTSs that can be regarded as physically meaningful black hole boundaries (i.e., horizons). In the future, this method could also be used by other research teams to study horizons in black holes.

“By computing a MOTS’s stability properties, we can immediately tell if it belongs to a physically behaving horizon or if it is just an unstable marginal surface,” Pook-Kolb, Hennigar and Booth explained. “This criterion establishes something very important to us: Despite the sheer number of marginal surfaces we found, we find a very clear and simple structure when we include the stability properties.”

In their recent study, Pook-Kolb, Hennigar and Booth report valuable new insight about what could happen to apparent horizons when two black holes merge into one. So far, their analyses considered non-spinning binary black holes, but they plan to eventually conduct further studies focusing on rotating black holes.

“Obviously, there are still many questions to address,” Pook-Kolb, Hennigar and Booth said. “Probably the most important one will be to extend our study to fully generic mergers of rotating black holes. While we do think that very similar structures should exist, we have been surprised often enough to remain extremely curious.”