Superconductivity and ferroelectricity found in the same 2D material 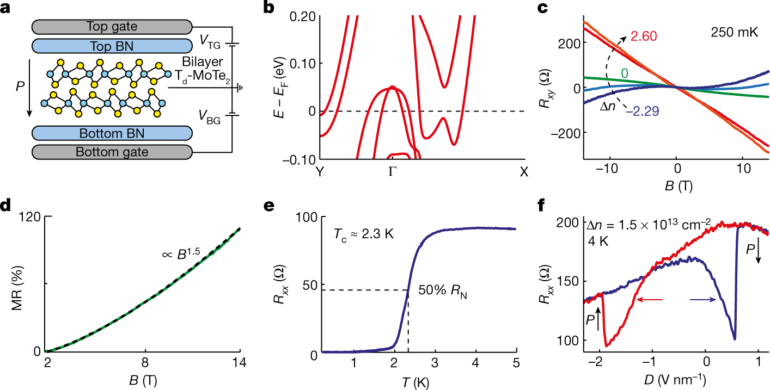 When it comes to two-dimensional materials, it’s best to expect the unexpected. Writing in Nature, researchers at Columbia find evidence that two competing phenomena—superconductivity and ferroelectricity—can occur within the same material. “This is the first time that a tunable switch between ferroelectricity and superconductivity has ever been seen,” said corresponding author Daniel Rhodes. “We don’t fully understand it just yet, but it’s definitely there.”

Rhodes, now an assistant professor at the University of Wisconsin, has a particular knack for growing high-quality crystals that can be peeled into atom-thin layers to explore the unusual properties that can arise in two dimensions. He started working on the material in question—MoTe2—as Ph.D. student at Florida State. When he joined Columbia’s National Science Foundation-funded Materials Research and Science Engineering Center (MRSEC) as a postdoctoral fellow in 2016, he and colleagues found initial evidence of superconductivity—the resistance-free transport of electrical currents—in single layers of MoTe2.

The effect was there but not as easy to manipulate as theory suggested, so Rhodes and the MRSEC began exploring stacks of the material. They found superconductivity to be much easier to control in a two-layer system, which also comes with a unique structural feature: it’s not symmetric. Atoms between the layers don’t line up, which should inherently create an internal electric field, known as ferroelectricity, explained Apoorv Jindal, first author and Columbia physics Ph.D. student who continued Rhodes’ work on the material after he moved to Madison in 2019.

Whereas superconductivity is typically characteristic of electricity-conducting metals, ferroelectricity was long thought to only occur only within insulating materials. In 2018, however, researchers working with David Cobden at the University of Washington found initial evidence of a ferroelectric metal in WTe2, a tungsten-based material with the same crystal structure as MoTe2. Having already confirmed that superconductivity occurs in MoTe2, Jindal and Rhodes wondered if ferroelectricity might also turn up.

Jindal applied an electric field, and the results blew him away. “I forwarded it to Dan and asked, is this possible? Can a ferroelectric superconductor even exist?” he recalled. The team performed additional measurements across temperatures, magnetic fields, and electrostatic doping and found a manipulatable transition between superconductive and ferroelectric states within MoTe2.

“Finding these two properties together is magical,” said Jindal, especially given the effort it took to build the samples. MoTe2 is an extremely air- and water-sensitive material, so the layers had to be carefully prepared and combined in the confines of a glovebox and then sealed to prevent exposure to the ambient environment as they were transported to different instruments for testing. It took over six months just to perfect a fabrication process that would preserve bilayer MoTe2‘s unique properties, he said.

The superconducting state itself is also surprising, particularly in the way it behaves as the number of charge carriers is changed by gating. Theoretical modeling carried out by Ph.D. student Amartya Saha, under the guidance of professors Turan Birol and Rafael Fernandes, all at the University of Minnesota, suggest that superconductivity is not of the conventional type, in which vibrations of the atoms provide the glue that makes electrons form coherent pairs. “The fact that superconductivity requires two types of charge carriers (electron-like and hole-like carriers) to be present is a telltale sign of the importance of electronic interactions,” said Fernandes.

Because superconductivity and ferroelectricity are both intrinsic to the material itself, there could be a number of potential applications, particularly in quantum computing and information. For example, one approach to building quantum computers involves combining superconducting materials with an insulating barrier in between to form what are known as Josephson junctions, Jindal explained. The ability to use a single material, like MoTe2, rather than two separate ones could help eliminate interfacial problems that can make these junctions less efficient. The rapid speed at which the material can be switched between the two properties may also hold promise for quantum logic applications.

Those questions, said Rhodes, are for engineers to take over. From here the team, which includes Columbia physicists Cory Dean and Abhay Pasupathy and engineer James Hone as well as theoretical collaborators at the University of Minnesota, plans to explore why these two properties exist and how they can be controlled. “There are fundamental science questions still to ask that to date, we just haven’t had a system in which to explore—now we do,” said Rhodes.

Starfish embryos swim in formation like a ‘living crystal,’ could inform the design of self-assembling robotic swarms